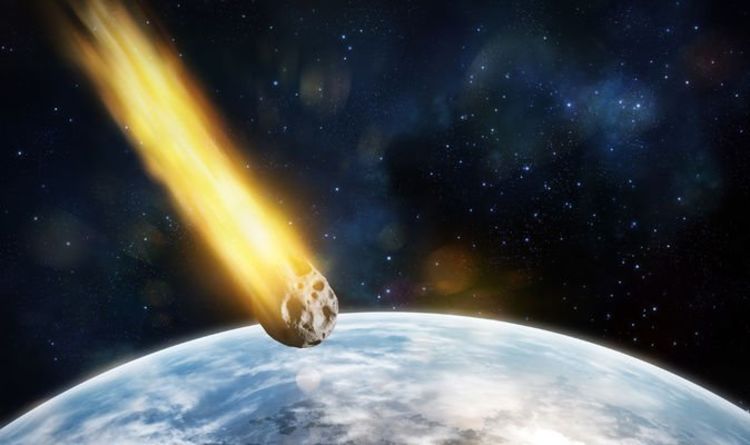 The asteroid is of such immense size the space rock is considered by some scientists as a largely preserved proto-planet. To put this size into context, at least three Vesta-size asteroids could be squeezed side-by-side into New South Wales, Australia.

Vesta is of particular fascination to scientists because the asteroid can expand our understanding about the evolution of planet such as Earth.

Research lead Professor Fred Jourdan, from Curtin University’s school of Earth and Planetary Sciences, said: “Vesta is the only largely intact asteroid which shows complete differentiation with a metallic core, a silicate mantle and a thin basaltic crust, and it’s also very small, with a diameter of only about 326 miles (525km).

“In a sense it’s like a baby planet, and therefore it is easier for scientists to understand it than say, a fully developed, large, rocky planet.”

Vesta was visited by the NASA Dawn spacecraft in 2011, when it was observed the asteroid had a more complex geological history than expected.

READ MORE: Mars astronauts will use LASERS to communicate with Earth

With the aim of hoping to understand more about the asteroid, the Curtin research team analysed well-preserved samples of volcanic meteorites found in Antarctica identified as having originated from Vesta.

Professor Jourdan said: “Using an argon-argon dating technique, we obtained a series of very precise ages for the meteorites, which gave us four very important pieces of new information about timelines on Vesta.

“Firstly, the data showed that Vesta was volcanically active for at least 30 million years after its original formation, which happened 4,565 million years ago. While this may seem short, it is in fact significantly longer than what most other numerical models predicted, and was unexpected for such a small asteroid.

“Considering that all the heat-providing radioactive elements such as aluminium 26 would have completely decayed by that time, our research suggests pockets of magmas must have survived on Vesta, and were potentially related to a slow-cooling partial magma ocean located inside the asteroid’s crust.”

His colleague and co-researcher Dr Trudi Kennedy revealed the research also showed the timeframes when very large impacts from asteroids striking Vesta were carving out craters of 10 or more kilometres deep from the asteroid’s volcanically active crust.

She said: “To put this into perspective, imagine a large asteroid smashing into the main volcanic island of Hawaii and excavating a crater 15 kilometres deep — that gives you an idea of what tumultuous activity was happening on Vesta in the early days of our Solar System.”

Scientists further explored the data to understand what was happening deeper in the asteroid by calculating how long it took for Vesta’s core to cool.

Some of these rocks were found to be too deep in the crust to be affected by asteroid impacts, and yet, being relatively close to the mantle, they were strongly affected by the natural heat gradient of the proto-planet and were metamorphosed as a result.

“What makes this interesting is that our data further confirms the suggestion that the first flows of erupted lava on Vesta were buried deep into its crust by more recent lava flows, essentially layering them on top of each other.

The rocks were then “cooked” by the heat of the proto-planet’s mantle, “modifying the rocks,” Dr. Kennedy added.