Asteroid shock: Asteroid which NASA plans to visit has ‘small moon’ in its orbit 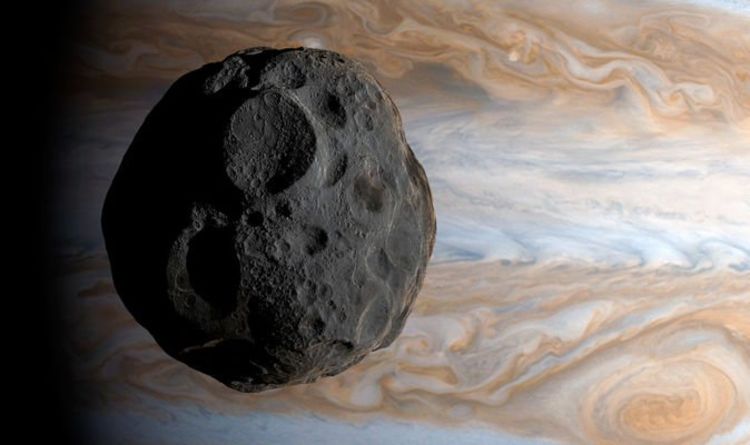 In 2021, NASA plans to launch its Lucy mission which will see a probe visit Trojan asteroids – a group of small space rocks which share the same orbit as Jupiter. The rocket will take at least 12 years to get to the asteroids, which are almost four billion miles from Earth, where it will visit at least seven space rocks.

The asteroids are believed to be some of the oldest remnants of the solar system, but now NASA has a new object to study while there.

By using data from the Hubble Space Telescope (HST), researchers from the Southwest Research Institute (SwRI), which is leading the Lucy project, have discovered that one of the asteroids, known as Eurybates, has a small natural satellite in its orbit.

Eurybates, which has an orbital period of the Sun of 12 years, is one of the larger trojan asteroids, with a diameter of approximately 68 kilometres.

Its huge size made it a leading candidate to have a satellite in its gravitational pull, and scientists were not disappointed.

SwRI’s Hal Levison, principal investigator of the mission, said: “If I had to bet that one of our destinations had a satellite, it would have been this one.

“Eurybates is considered the largest remnant of a giant collision that occurred billions of years ago.

“Simulations show that asteroid collisions like the one that made Eurybates and its family often produce small satellites.”

The satellite orbiting Eurybates was exceptionally hard to find, with the main body being 6,000 times brighter than the small rock in its orbit.

To discover it, experts had to review three separate orbits of the Eurybates asteroid.

California Institute of Technology’s Mike Brown, a Lucy team member, said: “At the Lucy science team meeting last November, my colleague Keith Noll pointed out a suspicious-looking spot next to an image of Eurybates.

“I quickly downloaded the next set of data and realised that the spot was still there, but it had moved, just like a satellite would.”

Mr Noll, Goddard Spaceflight Center’s project scientist for the mission, said: “We asked for more HST time to confirm the existence of the satellite, and we were given three tries.