Asteroid terror: NASA spots approaching mega rock that can carry two Titanics on its back 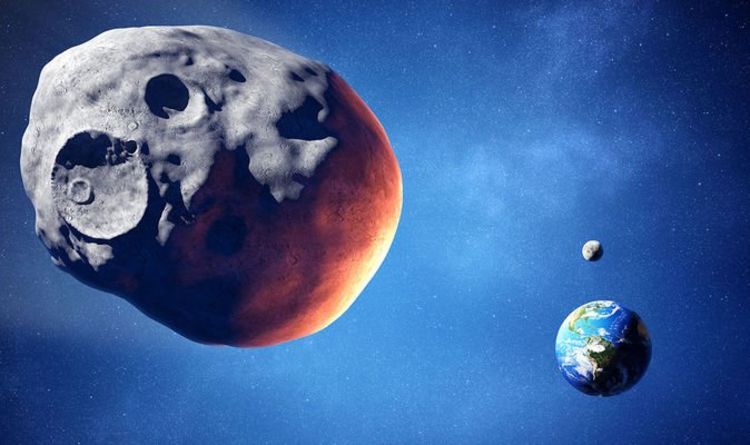 The rocky leviathan is most likely a composite of iron, other metals and elements and it has been labelled a potentially hazardous object because of its city levelling size and close intersection with Earth’s orbit. The asteroid is named 2015 JD1 and is an Apollo type. Apollo asteroids form the majority of the population of Earth-crossing and Potentially Hazardous space rocks.

They form a group of near-Earth asteroids locked close to our home world by the orbit of Mars.

They were named after 1862 Apollo, discovered by German astronomer Karl Reinmuth in the 1930s.

In this case LD is short for Lunar distance, which is the average distance from the Earth to the Moon.

Present calculations show the 450 metre wide asteroid as passing the Earth at 12.9 times this distance.

Meanwhile, proof has emerged that the asteroid that wiped out the dinosaurs instantly acidified the world’s oceans.

Fossilised algae, the world’s smallest organisms, show the devastating impact on the seas 66 million years ago.

It’s the most definitive evidence to date of the cause of Earth’s last mass extinction, said the international team.

The findings published in Proceedings of the National Academy of Sciences also shed light on the evolution of marine life.

As the space rock hit it sent a vast cloud of sulphur gas into the atmosphere, similar to what would happen if Yellowstone Super-volcano where to erupt.

Dr Henehan said: “Our data speak against a gradual deterioration in environmental conditions 66 million years ago.”

It’s the first direct link between the death of the dinosaurs and a sharp drop in the pH levels of the oceans – indicating a rise in ocean acidity.

Co-author Dr James Rae, of St Andrews University, said: “For a long time people have thought there might be a decrease in ocean pH because the meteorite hit sulphur-rich rocks.

“This could add sulphuric acid to the atmosphere and ocean.

“But until now no one had any direct evidence to show this happened.”