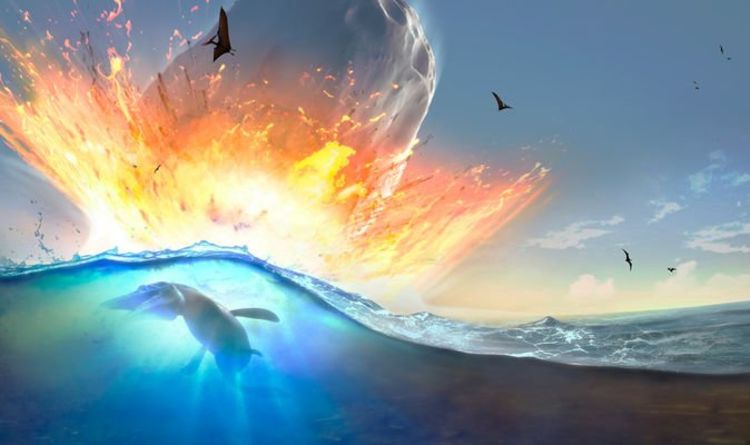 Asteroids are the small rocky bodies in the inner Solar System orbiting the Sun. There are millions of them flying around space and their collisions – known as impact events – have played a significant role in shaping many planets. NASA is constantly watching space, categorising any Near-Earth Objects (NEOs) as Potentially Hazardous Objects (PHO) if they could pose a threat to life on Earth.

However, Dr Natalie Starkey posed a new theory in her 2018 book “Catching Stardust,” theorising what would happen if a huge space rock smashed into one of the vast areas of open water.

She warned readers: “If we fail in the future to protect the planet from space threats, then we could expect a large asteroid or comet impact to wreak havoc on the Earth’s surface, resulting in major global changed and high death tolls.

“It wouldn’t just be humans that would be affected, of course, but many other Earth species, too.

“A comet or asteroid impacting one of Earth’s oceans would result in huge tsunamis that could utterly devastate surrounding coastal regions.

“It’s anyone’s guess how many millions of people would be directly or indirectly affected by a tsunami radiating out from an impact location in the middle of the Atlantic or the Pacific Ocean.

“If we just imagine the ripples radiating out from a pebble being thrown into a pond, with nothing to get in their way, the ripples would travel as far as the pond’s edge.”

Dr Starkey, who is a cosmochemist by trade, went on to put the idea into perspective, with a shocking proposal.

She added: “Although they wouldn’t be expected to demolish the pond’s age, depending on the size of the pebble and the force with which it enters the pond, we could expect water to flood out over the edges once the ripple reached that far.

“Now, let’s imagine scaling up to a huge chunk of asteroid, possibly a few kilometres in diameter, travelling at unimaginable speeds – up to 40,000mph – into one of our oceans.

“The effect is the same, but the edges of the pond are now large cities inhabited by millions of people and the dense infrastructure that certainly couldn’t cope with being inundated by a massive wall of water.

“A large comet or asteroid strike on land wouldn’t be much better, swapping water ripples for ground waves and resulting in huge shockwaves that would easily flatten buildings, at the same time as ripping up and melting the ground around the impact location.”

Asteroid 101955 Bennu, formally known as 1999 RQ36, is a potentially hazardous object listed on the Sentry Risk Table with the second-highest cumulative rating on the Palermo Technical Impact Hazard Scale.

Investigators have already warned the space agency that it could be devastating if they do not act.

According to a study by scientist Maria Eugenia Sansaturio, the 1999 asteroid may impact the Earth.

Dr Sansaturio warned in a report for the Solar System journal Icarus that there is a good chance of the asteroid striking.

However, NASA has a less destructive move for Bennu.

The space agency is currently running a mission with its OSIRIS-REx spacecraft to find out more about the rock.

The spacecraft spent two years chasing Bennu down, before orbiting it for another two years and taking samples.

Then, in 2023, it will blast back to Earth to allow scientists from around the world to study it.

The mission team is particularly interested in learning the role that asteroids like Bennu – dark, primitive and apparently carbon-rich – may have played in creating life on Earth.

It will also help scientists to refine the odds of a strike on Earth.

Audrey McGraw is all grown up! Mom Faith Hill was so proud as her youngest daughter — who turned 18 in December — voted...
Read more

Charlie Kaufman: What films has he made? FULL list from Adaptation to Synecdoche, New York

After this, Kaufman struggled to get his work made, and wrote various screenplays which were left unproduced. In 2015, he released an animated version of...
Read more

It's understood the fire broke out at a nearby rail station and spread onto the outer edges of Wentworth golf course. There are concerns the...
Read more