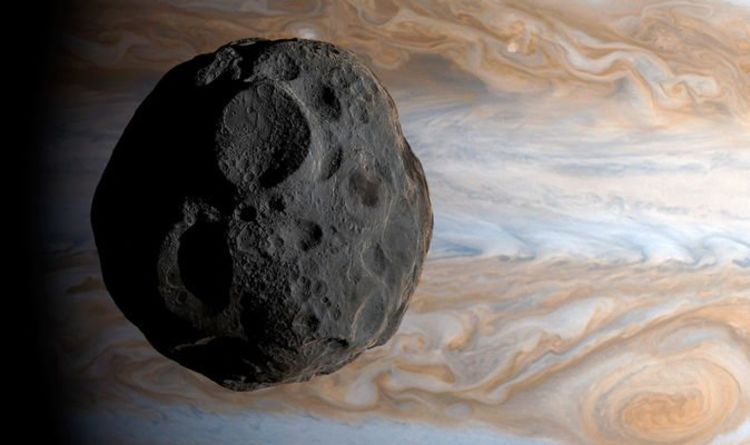 Jupiter is by far the biggest planet in the solar system, with a diameter 10 times smaller than the Sun – by comparison, Earth’s diameter is 109 times smaller than the Sun. As a result, it has a tremendous gravitational pull and regularly brings cosmic objects such as asteroids into its orbit. Research has now found that these asteroids in the gas giant’s orbit can push and shove each other to the point where they are ejected from the pull of Jupiter and alter their trajectory.

Some of these asteroids, the research published in the online journal Monthly Notices of the Royal Astronomical Society continued, could end up on a collision with Earth.

Kenta Oshima, a researcher at the National Astronomical Observatory of Japan, wrote in the research paper that the objects which are of the biggest worry are the ones that are on a high-inclination of the solar plane.

The solar plane is the relatively flat and equal level which planets orbit the Sun on – anything above this has a high-inclination.

Objects with a high-inclination dip in and out of the planets and other celestial objects, interacting with the gravitational pull of all that is around them.

As they do, their trajectories can slightly change, which is what could push them Earth’s way.

Mr Oshima wrote: “We pointed out the possibility that populations of undetected potentially hazardous asteroids exist at high-inclination locations of these objects.

“We point out that populations of undetected potentially hazardous asteroids of high eccentricity and inclination may reside in Jupiter’s vertically unstable quasi-satellite orbits, which can intersect the orbits of the terrestrial planets, including Earth by reducing their inclinations down to near zero via vertical instability.”

One asteroid in particular was highlighted in the research – 2004 AE9.

While this is a long time for humans, in astronomical terms it is relatively soon.

Mr Fuente Marcos told Space.com: “It is worth it to keep an eye on them, particularly cataloging them to have a census and to better know the actual size of this potentially hazardous population.