Astronomers Pinpoint The Origin of Huge Gas Bubbles Flowing Out...

There’s an unusual paradox hampering research into parts of the Milky Way. Dense gas blocks observations of the galactic core, and it can be difficult to observe in visible light from our vantage point.

In order to gain a better understanding of the Galactic Center (GC) and the Interstellar Medium (ISM), a team of astronomers used a telescope called the Wisconsin H-Alpha Mapper (WHAM) to look into the core of the Milky Way in part of the optical light spectrum.

The team of researchers focused their efforts on two features of the Milky Way, called the Fermi Bubbles. The Fermi Bubbles are massive outbursts of high-energy gas emanating from the galactic core.

They’re called Fermi Bubbles because they were discovered in 2010 by the Fermi Gamma-Ray Space Telescope. These bubbles are enormous, extending a total of about 50,000 light years from the disk of the Milky Way, and they’re travelling at millions of miles per hour.

A paper presenting their observations is titled “Discovery of High-Velocity H-Alpha Above Galactic Center: Testing Models of the Fermi Bubble.” Lead author of the work is Dhanesh Krishnarao, a grad student in astronomy at the UW Wisconsin. The findings were presented at the 236th meeting of the American Astronomical Society, and have been submitted to The Astrophysical Journal Letters.

Previous to this work, some observations of the Fermi Bubbles were made in UV, by examining the light from distant quasars as it passed through the gas. While those observations extended scientists’ understanding of the bubbles, they had limitations.

They could only be made on specific sight lines, while WHAM is an all-sky telescope. Those previous observations couldn’t measure the velocity, temperature, and density of the gas.

But WHAM takes a different approach. Like its name says, it can observe Hydrogen-Alpha atoms. In an H-Alpha atom, an electron has jumped from the third energy level to the second energy level. That leaves a spectral line that’s the brightest hydrogen spectral line in optical light. A simplified Rutherford-Bohr model of the H-Alpha process. (JabberWok/CC BY-SA 3.0)

ABOVE: When an electron (green) jumps down one energy level from n=3 to n=2, it produces a photon with a bright spectral line in visible light.

Matt Haffner is a Professor of Astronomy and Physics at Embry-Riddle Aeronautical University, and one of this paper’s co-authors. In a press release, Haffner pointed out how the WHAM telescope is helping astronomers make progress in understanding the Milky Way’s core region. Gas blocks our view of that region in a way that distant galaxies don’t.

“There are regions of the galaxy we can target with very sensitive instruments like WHAM to get this kind of new information toward the center that previously we were only able to do in the infrared and radio,” says Haffner.

“We can make comparisons to other galaxies by making the same kind of measurements towards the center of the Milky Way.”

The scientists behind this research also observed the nitrogen emission lines in the Fermi Bubbles. They lined their observations up with recent Hubble observations of UV light at the same position, and combined them.

In a press release, lead author Krishnarao said “We combined those two measurements of emission and absorption to estimate the density, pressure and temperature of the ionized gas, and that lets us better understand where this gas is coming from.”

In their paper the authors write “Wisconsin H-Alpha Mapper (WHAM) observations reveal high velocity H alpha and [N II] λ6584 emission lines in the same direction and velocity as ultraviolet absorption line features that have been previously associated with the biconical gamma-ray lobes known as the Fermi Bubbles.”

Astronomers think that whatever happened at the Milky Way’s core to create the Fermi Bubbles, it happened several millions of years ago. Some researchers think that Sgr A*, the supermassive black hole at the center of the galaxy, drew a massive cloud of hydrogen into its accretion disk, causing an enormous burst of energy. But this study wasn’t trying to determine the cause.

Now that the researchers have data for the density, velocity, and temperature of the gas in the Fermi Bubbles, they can test that data against different models.

“The other significant thing is that we now have the possibility of measuring the density and pressure and the velocity structure in many locations,” with the all-sky WHAM telescope, says Bob Benjamin, a professor of astronomy at UW–Whitewater and co-author of the study.

“We can do an extensive mapping effort across the Fermi Bubbles above and below the plane of the galaxy to see if the models that people have developed are holding up. Because, unlike the ultraviolet data, we’re not limited to just specific lines of sight.”

In their paper the authors explain that “These optical spectra provide a new avenue to constrain both the physical conditions of the ionized gas that has been associated with the Fermi Bubbles as well the radiation field emerging from the Galactic Center region and within the Fermi Bubbles.”

In the conclusion of their paper the authors describe some of their findings. They say their findings indicate a gas temperature of 8900 ± 2700 K. They also point out that the high thermal pressure they found is “comparable to, but still greater than, those predicted by models of a hot gas halo in the inner Galaxy or of a Fermi Bubble shell.”

But even though these findings are very detailed, they don’t conclusively show what caused the Fermi Bubbles. The team says that WHAM has more to give when it comes to studying them, though. And just like in this study, future observations can also be combined with existing Hubble observations to expand our understanding. 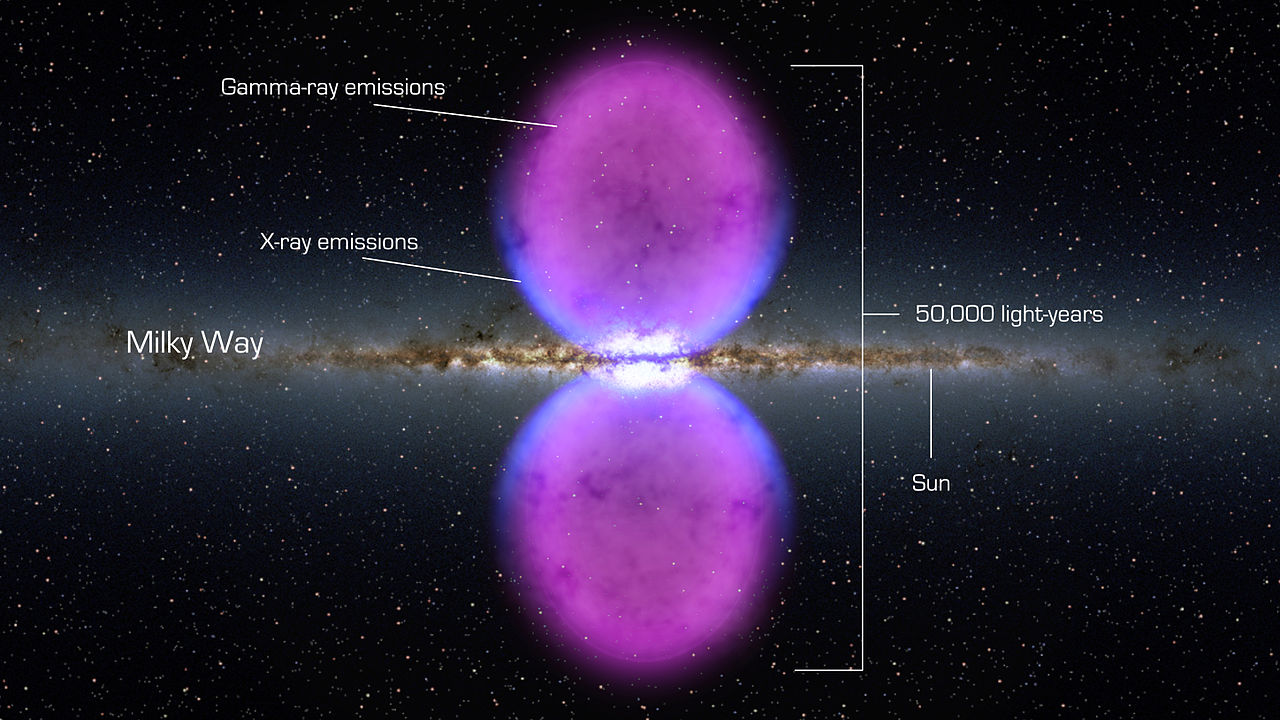 Gamma and X-ray emitting Fermi Bubbles above and below the plane of the Milky Way. (NASA’s Goddard Space Flight Center)

“With future observations, WHAM can trace emission associated with the Fermi Bubbles both spatially and kinematically at large scales. Additionally, other pointed observations towards distant UV bright sources with existing HST spectra can provide sensitive columndensity profiles of multiple species across different regions of the southern and northern Fermi Bubbles.”

So, maybe one day we’ll finally know what happened a few million years ago at the center of the Milky Way, to form these giant bubbles.