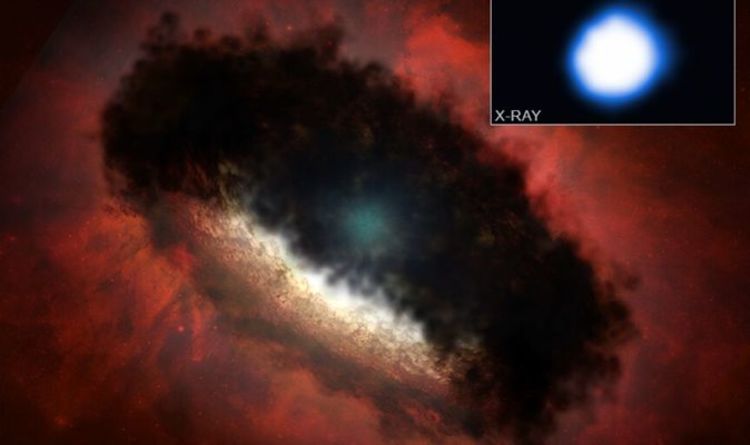 In 2017, NASA’s Chandra X-ray Observatory observed an X-ray flare from a star 1,400 light years away known as HOPS 383. The star is what is known as a protostar, as it is in the first stage of its evolution. What’s more, HOPS is the same star type as the Sun – a yellow dwarf.

By studying the young star’s X-ray flare, astronomers are able to learn more about the Sun’s, and indeed the solar system’s, evolution.

Lead author of the new study Nicolas Grosso, of Astrophysics Laboratory of Marseille at Aix-Marseille University in France, said: “We don’t have a time machine that lets us directly observe our sun as it was beginning its life, but the next best thing is to look at analogs of it like HOPS 383.

“From these, we can reconstruct important parts of our own solar system’s past.”

Astronomers already knew that young stars emit more X-ray flares than older ones, but it was still unclear when stars begin emitting these flares.

However, this research “resets the timeline for when astronomers think sun-like stars start blasting X-rays into space,” according to the statement.

HOPS is also encircled by a cloud of hot gas and dust.

When young stars emit X-ray flares, they can strip some of the elements from the gas and dust which surrounds them.

The clouds which encircled our Sun when it was in its infancy helped to form the planets of the solar system down the line, according to the research published in the journal Astronomy and Astrophysics.

So understanding how X-ray flares interact with the dust clouds will help astronomers paint a clearer picture of the evolution of our solar system.

David Principe of the Massachusetts Institute of Technology in Cambridge, USA, said: “What the Sun did over 4.5 billion years ago affected the raw material that ended up making the planets and everything else in our Solar System.

“Any X-rays from a young Sun may have played a big role in shaping those ingredients.”

Kenji Hamaguchi, of the Center for Research and Exploration in Space Science & Technology and NASA’s Goddard Space Flight Center in Greenbelt, Maryland, added: “If this connection between X-ray flares and outflows is correct, similar flares may have played an important role in forming our life-giving host star, the Sun.”

ByCharles Davis, Business Insider Mass rapid-testing for COVID-19 - especially of those people showing no signs of infection - could bring an end to the...
Read more