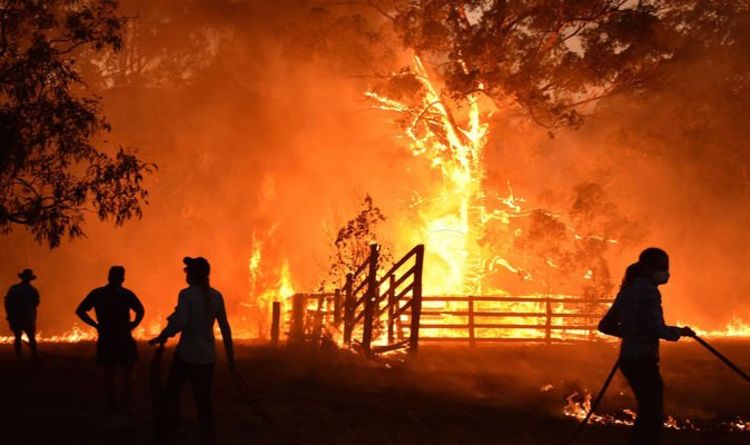 Police confirmed the death of 58-year-old man in northern NSW, after his body was found in burnt-out bushland near Kempsey, 400km north of Sydney. The death of the unnamed victim follows those of Vivian Chaplain, 69, Julie Fletcher, 63, and George Nole, whose age is unknown. All three were found in separate locations in rural NSW.

The fires have destroyed over 300 homes and continue to blaze unabated, with fire crews battling more than 120 fires in NSW and Queensland.

Fire chiefs have been stunned by both the severity and scale of the spring fires, as they issued a warning that the worst of the summer is “still ahead of us”.

NSW has borne the brunt of the devastation, as over one million hectares of land has been burnt since September.

Authorities were forced on Tuesday to issue a first ever “catastrophic” fire warning for the greater Sydney area.

A “catastrophic warning” is the highest point on Australia’s six-point fire danger scale, and is only issued on rare occasions.

Such warnings mean that homes cannot be defended from catastrophic fires and the the only survival advice is to leave at risk areas early.

Although cooler conditions are currently bringing some assistance to firefighters, officials in NSW insisted that the fight was “not over yet”.

They pointed to forecasts of rising temperatures once again ahead of the weekend.

“You go through all the stages of grief – you’re angry, you’re sad, you joke about it and then you’re just sort of angry you didn’t do more.”

She added: “The only reason we came back was for closure. I don’t really want to come back again, I’ve seen what I need to see.

“I can see there’s nothing salvageable at all and I can see the state of the place. I just needed some closure, to know it was final.”

In Queensland, crews are working to contain over 70 fires.

Thousands of residents were warned to leave or defend their homes when blazes escalated on Wednesday, prompting emergency warnings.

Meanwhile, in Western Australia several fires escalated across the state’s coast on Wednesday, with two blazes threatening homes in the port city of Geraldton.

Officials warned of potentially “catastrophic” conditions in one region.

About a dozen blazes remain burning in the region.

New Zealand and other states have sent firefighters to help their exhausted Australian counterparts.