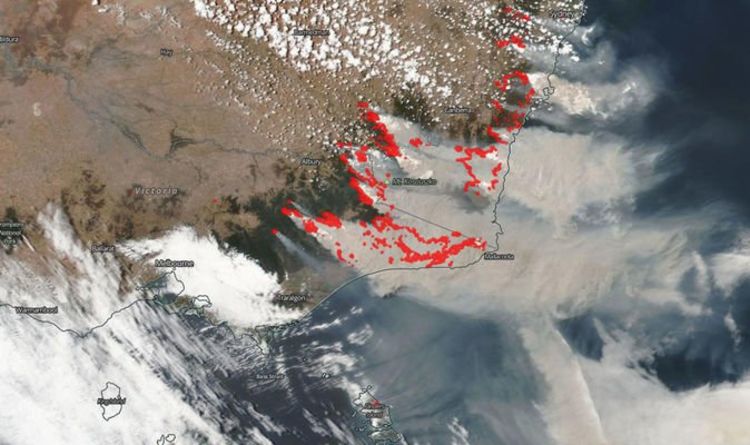 Fires have been ravaging Australia for several months, with things taking a devastating turn in late December and early January. Roughly 60,000 square kilometres (37,300 miles) have been scorched by the wildfires, with tens of people losing their lives and more than 1,300 homes burned to the ashes. However, a pouring of rain has now brought temporary relief to the residents of New South Wales and Victoria.

But the rains bring problems too. NASA images show that as the fires are temporarily put out, more smoke is created which is ploughed into the atmosphere.

This smoke then disperses, reducing air quality over Australia and even New Zealand, almost 1,500 kilometres away.

NASA said: “The image above is just a reminder that smoke does not stay in one place.

“Looking at Australia from a farther distance in this Aqua satellite image taken on Jan 05, 2020, it is evident that the smoke plumes coming off the fires are traveling on wind currents and are heading for the neighbouring country of New Zealand which is just over a thousand miles away.

“The skies over New Zealand, once clear, are now turning a very dangerous orange hue and by Sunday, January 5, the Sun had been blotted out in Auckland, New Zealand.”

But for residents of Australia who think the worst of the fires is now behind them, NASA stated the fires could come back even stronger.

The space agency said: “NASA satellite data continues to provide a look at the smoke and aerosols generated by the massive fires in Australia.

“Although rain fell on parts of the fire-ravaged areas in New South Wales and Victoria, Australia (and in some areas the rain was torrential), officials are already warning residents that the fires (and resultant smoke and aerosols) will return to their former state with a vengeance by Thursday when hot, dry weather and winds return.