Australia, NZ dlrs get a reprieve as U.S. dollar falters 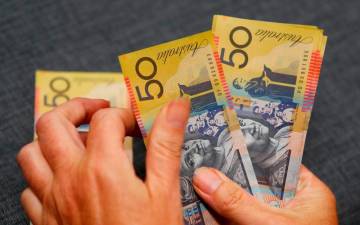 SYDNEY: The Australian and New Zealand dollars were boasting their best weekly performance in eight years on Friday after dire U.S. jobs data and another pledge of unlimited easing by the Federal Reserve undermined their U.S. counterpart.

The swing was quite a turnaround given just a week ago it carved out a 17-year trough at $ 0.5510 as global markets went into meltdown.

The rally came as a staggering spike of 3.28 million in U.S. jobless claims led Fed Chair Jerome Powell to promise the bank would lend “aggressively” to cushion the impact of the coronavirus.

The Fed’s unswerving commitment has boosted equities globally and eased liquidity strains in debt markets, in turn aiding risk assets including the Aussie and kiwi.

“The grim economic news that will continue to unfold in coming weeks is, we can conclude, largely discounted,” said Ray Attrill, head of FX strategy at NAB.

“Monetary and fiscal policy support being meted out in ever larger quantities is currently in the driving seat for markets,” he added. “The improvement in risk sentiment this week is seeing the air come out of this month’s USD rally.”

The RBA on Friday offered to buy another A$ 3 billion of government paper, bringing purchases to A$ 16 billion since it started the program n March 20.

The RBNZ on Friday said it would buy NZ$ 1.35 billion of NZ government paper next week, almost twice the NZ$ 750 million it had initially signalled.

All this buying has helped keep Aussie three-year bond yields down at 0.306%, and just a whisker above the 0.25% cash rate.