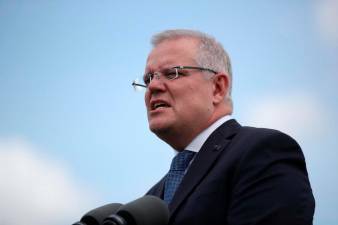 SYDNEY: Australian Prime Minister Scott Morrison (pix) said on Tuesday the government will soon announce measures to stimulate an economy hammered by the effects of the coronavirus outbreak, as the local share market came in for another turbulent session.

After global equities were sold off heavily overnight following reports of a lockdown covering all of Italy, the Australian share market fell up to 4% in early trading before rebounding into positive territory by mid-session.

“Our objective is this – keep people in jobs, keep businesses in business, and ensure we bounce back stronger on the other side,“ Morrison said at the Australian Financial Review conference in Sydney.

“We must favour measures that will lift productivity to enable the Australian economy to sustain an even stronger growth trajectory than we were on prior to the crisis.”

The prime minister said the impacts from the coronavirus outbreak were “potentially greater” than the global financial crisis of 2008, and the government would soon announce a stimulus package geared to meet the “unique nature” of the challenge from the virus outbreak. He did not give details.

A report in the Australian newspaper on Monday said the government was planning measures worth about A$ 10 billion ($ 6.6 billion) to combat the economic impact of the coronavirus, abandoning plans for a budget surplus in the current fiscal year.

National Australia Bank’s index of business conditions for February showed measures of Australian business and consumer sentiment taking a hit from coronavirus, raising the risk of the country’s first recession in three decades.

The total number of cases in Australia rose overnight to 100 from 80 on Tuesday, with the most populous state of New South Wales (NSW) reporting an additional seven cases, taking its tally to 54.

A school in Melbourne was closed on Tuesday after a teacher tested positive for the virus, a spokesman for Victoria state’s department of health said, the state’s first case of local transmission.

Two schools in Sydney were closed on Monday after three students tested positive for the coronavirus.

Meanwhile, Australian Rules club Fremantle Dockers said one of their players has been isolated and tested for the coronavirus after showing “flu-like” symptoms following contact with a friend who had been in China.

The coronavirus has killed nearly 4,000 people across the globe, with three deaths in Australia.

Morrison also called on big businesses in the country to assist the government in its economic recovery efforts.

“We need you to support your workers by keeping them employed. Whenever possible, support them. Full-time, part-time, casual, including with paid leave if they need to take time off during the course of the virus,“ he said. -Reuters