Australia shares fall most in over 11 years on virus fears, oil price crash 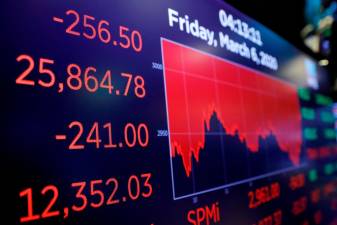 Australian shares were hammered on Monday as investors scurried for safe havens on mounting fears of a deeper economic fallout from the rapidly spreading coronavirus outbreak, and oil prices dived more than 20%.

“There is no handbrake at the moment. It is complete capitulation,” said James McGlew, executive director of corporate stockbroking at Argonaut.

“More than the rising (coronavirus) cases domestically, Australia is hit due to the economic uncertainty surrounding its top trade partner China and you throw in the oil crisis, it is mayhem,” he said, adding that: “Fear is by far the greatest driver in this market today.”

By last week, Australia had recorded 60 cases of the virus while two elderly people had died, and the prime minister warned the public bill for treating infected patients could top $ 661 million.

Meanwhile, the number of people infected with coronavirus topped 107,000 globally as the outbreak reached more countries.

Energy stocks recorded their biggest ever intraday percentage drop, slumping as much as 19%. Oil Search and Santos lost about a quarter of their market values.

The metals & mining index also bled heavily, dropping more than 6% after prices of copper, aluminium and other industrial metals slumped on Friday.

Top miner BHP Group declined more than 13% to its lowest level in nearly two years, while Rio Tinto dropped over 6% in its worst session since June 2016.

Financials too fell, shedding more than 5%. The Big Four lenders lost in a range of 4% to 5%.

Among gainers, gold stocks climbed more than 2.3% as investors rushed to the safety of bullion.

Air New Zealand slumped 4.4% to its lowest level since November 2016 after the company withdrew its full-year earnings outlook and froze hiring, and said it would cut more capacity because of increased uncertainty over the scale of the outbreak. – Reuters