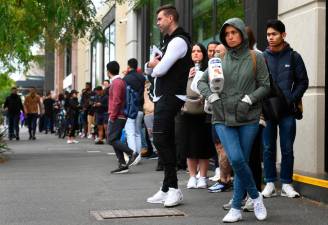 SYDNEY: Australia’s central bank injected A$ 6.9 billion (RM18.17 billion) into the financial system today and bought A$ 4 billion (RM10.53 billion) in bonds as economists predicted a spike in unemployment and the worst recession in the country’s history due to the coronavirus.

The Reserve Bank of Australia (RBA) has flooded the system with nearly A$ 65 billion cash since March 12 when a liquidity crunch sent global markets into a tailspin. It has also purchased A$ 13 billion in government bonds since launching its “unlimited” quantitative easing programme on March 20.

The RBA has so far been successful in flattening the yield curve as it aims to keep short-term yields around the cash rate of 0.25%.

A recession – the country’s first in nearly three decades – is still inevitable.

Westpac economist Bill Evans expects the unemployment rate to surge to 11.1% in the June quarter, up from his last week’s estimate of 7% and February’s official reading of 5.1%. He sees an economic contraction of 3.5% in that period.

Citibank economist Josh Williamson predicted the A$ 2 trillion economy would shrink 1.2% in the current quarter and 5.7% next quarter, which would be the largest on record.

Worryingly, the effects of the virus are likely to linger.

“We forecast a U-shaped, rather than a V-shaped recovery in economic activity,” Williamson added.

“Most importantly, we don’t see the economy producing quarterly output in dollar terms equal to the pre-coronavirus period until Q4 2021.”

The total number of coronavirus cases in Australia skyrocketed to almost 2,000 on Tuesday after the most populous state of New South Wales recorded its biggest daily leap.

Secondary data on Tuesday showed a sharp deterioration in services sector activity in March, underlining the hit from the coronavirus.

The CBA Services PMI fell to a record low of 39.8 as restaurants, cafes and tourism were hit hard by travel bans and cancellations of events and concerts.

A separate analysis of card spending data by Commonwealth Bank of Australia showed shopping outside of grocery, alcohol and healthcare was bleak.

And a weekly gauge of consumer confidence by ANZ-Roy Morgan plunged to a 30-year low of 72.2 points.

The government has responded to the crisis, with a stimulus package of A$ 66.1 billion on top of A$ 17.6 billion in support announced earlier this month though economists said a third package might be needed.

“Given the enormity of the current crisis, what we once would have called economic ‘stimulus’ will instead have to be large and permanent support for jobs, work and incomes, not temporary and targeted relief,” think tank the Australian Institute said.

Meanwhile, Australia’s pension funds are slashing the values of their unlisted infrastructure and property investments, as countries around the world move into lockdown to combat the spread of the coronavirus pandemic.

AustralianSuper, the country’s largest pension fund, lowered the value of its unlisted investments by 7% due to the impact of the virus outbreak, its chief executive Ian Silk said today.

The virus spread and measures to fight it have had a drastic impact on market values and volatility globally, with equity, debt and money markets registering declines not seen since the global financial crisis.

“In the current unique circumstances, AustralianSuper has moved to revalue its unlisted assets so that members can have an up-to-date picture of their superannuation balances,” Silk said in a statement.

“The values of all investment portfolios have been adjusted to reflect the economic and financial market impacts of Covid-19.”

The value of the fund’s unlisted assets, including airports, ports and toll roads around the globe, were reduced by 7.5% on average, Silk added.

The downgrade resulted in a 2.2% reduction in AustralianSuper’s “balanced” investment portfolios – which also include cash, bonds and equities – as of March 23.

UniSuper, an A$ 85 billion pension fund for the higher education and research sector, said it too had taken a 6% cut to unlisted infrastructure values and a 10% cut to unlisted property values. – Reuters