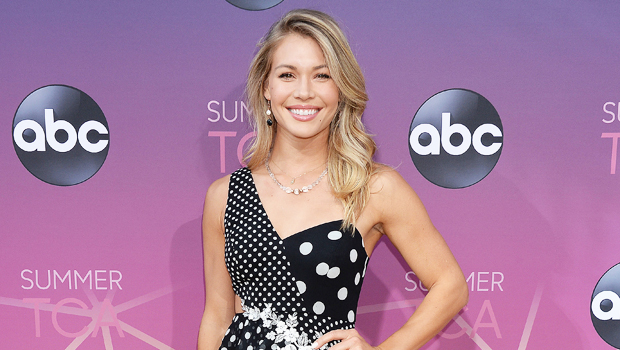 We’re so happy for Krystal Nielson! The ‘BIP’ star confirmed she’s pregnant on YouTube, confessing that the ‘best things in life happen unexpectedly’!

Krystal Nielson, 33, is pregnant! The Bachelor In Paradise star is expecting her first child with her boyfriend Miles Bowles, which she confirmed via a YouTube video on Wednesday, Nov. 11. “I’m feeling so anxious and excited and nervous and whoa — all of it. I’m just honestly ready…so ready,” she said in the emotional six-minute video. “I can’t wait to fill my heart with so much love in creating little pieces of me into this world and teaching them about love and teaching them the love I never had,” she narrated.

The fitness coach and her boyfriend made their relationship “Instagram official” back in October, and shared a romantic cuddly moment in the video. Lying in bed, the pair looked so happy. “We just found out today that Miles pregnant,” she joked, as the two love birds laughed. “I don’t feel too scared…I’m just excited for how its all going to happen,” she also confessed. In the video, she also took her subscribers on her emotional journey as she took a test to confirm the happy news!

“Oh my God, my whole life would change … my heart is pounding so hard,” as gushed through ters as she placed her hands on her face and teared up. “‘That would be f—— bananas. That would be so bananas if I was pregnant,” she added, before finding out the positive results in her bathroom at home. “I have a baby inside me. Oh, my God,” she exclaimed. Krystal already created an Instagram account for her unborn child (@GlitterBaby2021), who is due in April of next year.

“The best things in life happen unexpectedly…The best stories began with, ‘And then all of the sudden’,” she wrote in the caption for her video. “The best adventures are never planned. Free yourself from expectations. The best will come when you least expect it,” it also read. How fitting for the momentous event, which she also posted about on Instagram — see the photos here.

The happy news comes just It was just months after Krystal finalized her split from ex-husband Chris Randone, 32, which was official in August. The exes announced their separation six months prior, splitting after just eight months after their romantic TV ceremony officiated by Bachelor host Chris Harrison. “The past eight months have not been easy…I’ve been torn between mourning a life that could’ve been…and determined to fight for the future that I know I deserve,” she wrote at the time. We are so happy for Krystal on this happy news after a difficult year!