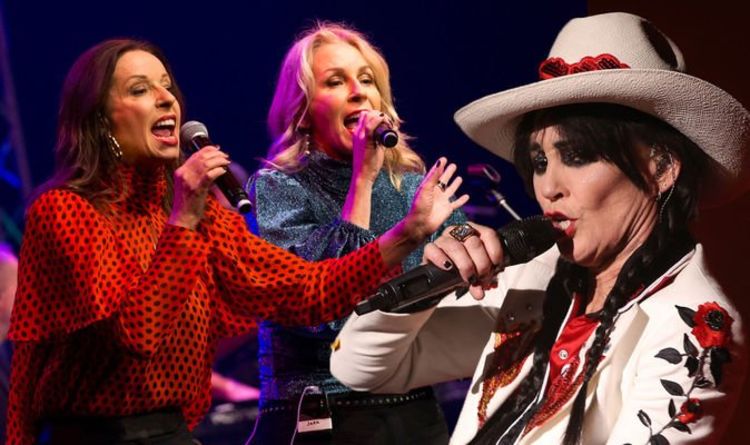 Bananarama are a three-piece girl band who came together in 1979 while studying fashion in London. While two of the members, Keren Woodward and Sara Dallin, were childhood friends, they met Irish musician and their third part Siobhan Fahey as students. What caused the band to have one of the messiest break-ups in pop history, and who was behind it?

Bananarama are known for their mega-hits Venus, Robert De Niro’s Waiting and Love in the First Degree, to name a few.

But the three women were “difficult” to work with, according to their former producer, Peter Waterman, who described the artists as “punks”.

He told The Sun: “I fought with them about everything. They saw themselves as punks who were not prepared to be manipulated by any man.

“If I dared to argue or if I didn’t see things the way they did, they just walked out.

“They made it clear they would never change and anyone who didn’t like it could get lost.

“Siobhan was the feistiest one. Trying to get her to focus her talent on the band was difficult, and we have not spoken in a very long time.”

Eventually, after years of living it large, with reports of them falling out of taxis after big nights out in clubs, Fahey left the band in 1988.

Soon after this, she was in the line-up of Shakespears Sister with Marcella Detroit.

While there did not seem to be any immediate fall-outs, it was later reported the group’s break up was pretty messy and Woodward and Sara did not speak to Fahey for a long while.

According to Fahey, who spoke to The Guardian about her departure, she said: “It was a combination of the fact that, musically, we’d gone absolutely full-on pop, at a time when I was feeling lost and dark and depressed in my life.

“I was obsessed with the Smiths. It had been a real pressure cooker, the three of us being together 24/7 for years. It couldn’t continue.”

Fahey has also spoke out about the Stock Aitken Waterman “Hit Factory” of which Bananarama were a part, claiming this was another reason for her decision to leave the band.

In conversation with The Guardian, Woodward said: “Peter was an ideas man, but he was never in the studio anyway.”

Fahey announced in response: “That’s because I said I can’t be in the studio with him.”

The group did not speak after 10 years, with Fahey calling the band’s break up “a painful divorce.”

She said: “There were sore feelings on both sides. I felt really isolated within the band for a year before I left. And they felt betrayed that I left.”

Another aspect to their break up was also in Fahey’s marriage to Eurythmics star Dave Stewart, which Woodward has said she thought was also a contributing factor to Fahey’s departure.

Despite there being some intense feelings, Woodward and Dallin remained Bananarama for years after the band broke up, performing as a duo or with a third member, as well as starting various businesses together.

The band fully reunited in 2017 and they performed a sell-out tour all over the country, however their final dates as a trip were August 2018.

Woodward and Dallin made a new album in 2019, while Fahey revived Shakespears Sister with Detroit and performing throughout 2019.