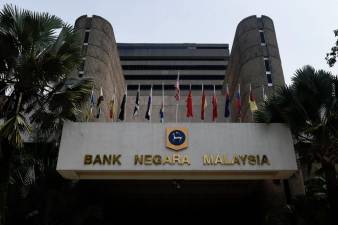 PETALING JAYA: While the banking sector will undoubtedly face an impact from the downward revision of the Overnight Policy Rate (OPR) made on Tuesday, most of them had already anticipated the cuts and took measures to actively manage their fixed deposits level to prevent overexposure.

In a note, HLIB Research said every 25 basis point (bps) cut in the OPR would see the sector’s net interest margin (NIM) contracting by 4-5bps and our profit forecast reducing by 2-3%.

“Alliance Bank Malaysia Bhd and BIMB Holdings Bhd would lose most while Affin Bank Bhd and AMMB Holdings Bhd are least affected. We assumed a symmetrical 25bps rate cut for both variable loans and non-current account-savings account (CASA) deposits while all other factors were held constant,” it said.

It also said that it foresees another round of rate cuts coming as early as May.

“While the market has correctly speculated that there is a second OPR cut, now there is risk of a third reduction seeing the potential of Covid-19 becoming more persistent and prolonged beyond 1Q’20 coupled with the lingering uncertainty created from our still fragile political landscape,” it said.

The research house is maintaining its neutral call on the sector with its preferred stock being CIMB Group Holdings Bhd. Other buy ratings include RHB Bank Bhd, BIMB Holdings Bhd, and Alliance.

CGS CIMB Research said should a third OPR cut occur, it estimates that it would lower the banks’ FY20-21 net profit by 2.1%, with the biggest impact of 6.7% for Alliance and BIMB and the smallest impact of 1.1% for Public Bank Bhd.

It is also maintaining its neutral call on the banking sector, with top picks being RHB Bank and Public Bank.

PublicInvest Research noted that any negative impact seen from the OPR revision are due to more immediate cuts in lending rates as compared to deposits, though there are mitigating factors such as loans and/or deposit mixes.

“Alliance Bank, once with the highest proportion of variable-rate loans in its portfolio has kept it steady at 83%, as compared to 89.9% in December 2018,” it said.

On the liability front, it said Public Bank and Alliance Bank’s higher levels of variable-rate deposits allow them to re-price faster, standing them in better stead to weather margin compression.

Maybank and CIMB Group, while exhibiting similar portfolio make-ups, have overseas exposures not affected by this reduction.

Loan growth is expected to benefit from this cut, with PIVB Research projecting a 5% loans growth for 2020. Asset quality will also find some relief due to reduced stresses from lower repayments for borrowers.

It has a neutral call on banking, with a positive bias given the sector’s lagging valuations to the broader market.