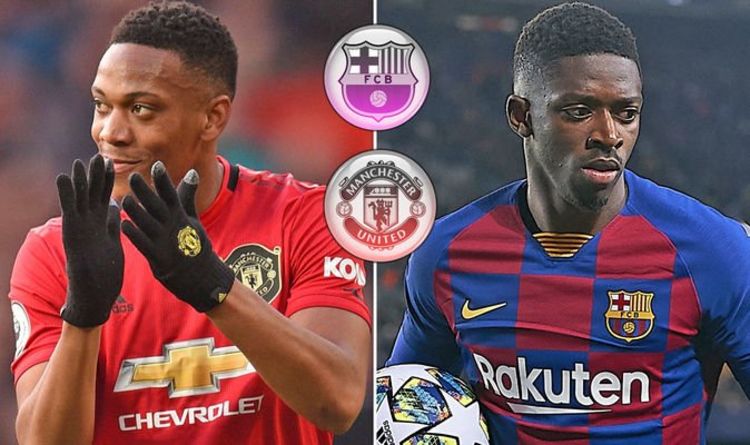 Barcelona star Ousmane Dembele has talked to Anthony Martial about life at Manchester United ahead of the summer transfer window, reports say. The duo are both team-mates at international level. And Dembele is being eyed by the Red Devils, with Ole Gunnar Solskjaer determined to add more firepower to his attack at the earliest opportunity.

Barcelona star Dembele could leave the Nou Camp when the transfer window reopens at the end of the campaign.

The France international has failed to live up to expectations ever since his huge £135million move from Bundesliga side Borussia Dortmund in the summer of 2017.

Injuries have constantly blighted him at the Nou Camp but, despite that, Catalan newspaper Sport say United are interested in bringing the 22-year-old to Old Trafford.

And it’s even suggested that Dembele has spoken to Martial about what life at Old Trafford is like.

While the exact details of their conversation aren’t disclosed, Martial will likely have had only positive things to say.

The striker has enjoyed a fine campaign under Ole Gunnar Solskjaer, becoming one of the first names on the Norweigan’s team-sheet.

KEY STORY: Man Utd owners the Glazers may sell up faster because of coronavirus crisis

And Arsenal are set to rival them for the Barcelona star, with Mikel Arteta keen on bringing the forward to the Premier League as well.

Barcelona hero Rivaldo recently expressed a belief his old side should sell Dembele due to his failure to ever live up to his massive price tag.

The Blaugrana legend told Betfair: “Ousmane Dembele signed for Barcelona almost three years ago and he has already had enough time to establish himself in the club and prove his value. It’s possible that he will never show his quality at the club.

“He is still a player with huge potential, but I think this summer could be the right opportunity for Barcelona to sell or even exchange him for a player they’re chasing already.

“He’s been unlucky with injuries, but he might also have tried to give more at some moments.

ByAt least four of the test events will involve athletes from abroad. They include swimming, gymnastics, diving and volleyball.The postponed Tokyo Olympics are getting...
Read more
Sports