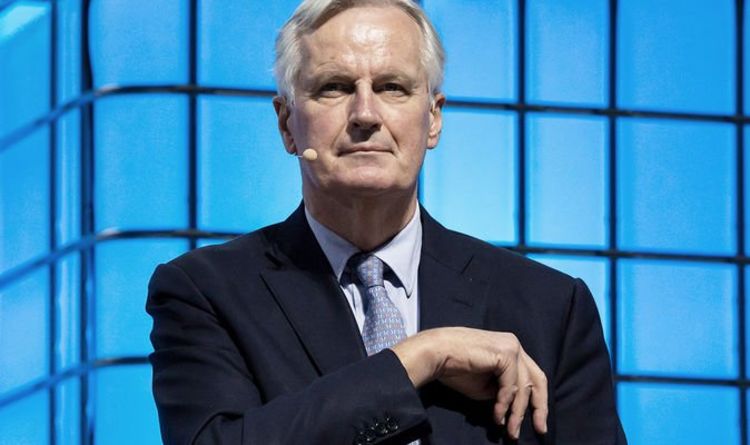 The European Commission vowed to “keep its eye on the ball to prepare for any result” ahead of formal talks beginning on Monday. Responding to the Prime Minister’s threat, a spokeswoman said: “There is a mid-year rendezvous in June to assess where we are with negotiations, so this is probably a very fair timeline to take by the UK Prime minister.” “The Commission retains its capacity to prepare for a no deal following the result of those negotiations.

“We will continue to inform people as well as businesses what preparedness measures would be ready in the event of no deal.”

Writing on Twitter, EU negotiator Michel Barnier said: “We take note of the UK’s mandate published today and will discuss our respective positions on Monday.

“We will stick to all our prior commitments in the Political Declaration.

“We want an ambitious and fair partnership with the UK in the future.”

Mr Johnson’s objectives for the trade tussle with Brussels were set out in a 30-page Whitehall document this morning.

It rules out any prospect of Britain following the bloc’s rules and regulations as part of a “level playing field”.

The document says the Government has “a vision of a relationship based on friendly cooperation between sovereign equals with both parties respecting one another’s legal autonomy and right to manage their own resources as they see fit.”

It adds: “That means that we will not agree to any obligations for our laws to be aligned with the EU’s, or for the EU’s institutions, including the Court of Justice, to have any jurisdiction in the UK.”

Ahead of a UK-EU summit in June, the Government will decide whether to continue talks with the EU or begin preparations for an Australian-style exit from the Brexit transition period.

The document reads: “The Government will work hard to agree arrangements on these lines.

Setting out further details of the UK’s position, Chancellor of the Duchy of Lancaster Michael Gove told MPs: “The UK government seeks a free trade agreement with robust protections for the environment and labour standards.

“But we do not see why the test of suitability in these areas should be adherence to EU law and submission to EU models of governance.”

He argued the EU had never attempted to apply those principles to other free-trade agreements and that they “shouldn’t apply to a sovereign UK”.

Mr Gove said he believed both sides could make progress before the June deadline.

“There is ample time during the transition period to strike the right deal for the UK,” he added.

“We hope to reach a broad agreement ahead of the EU Council’s high level summit in June whereupon we will take stock. We know our proposals are measured and our approach is fair. We know what we want to achieve. We’re ready to go.”