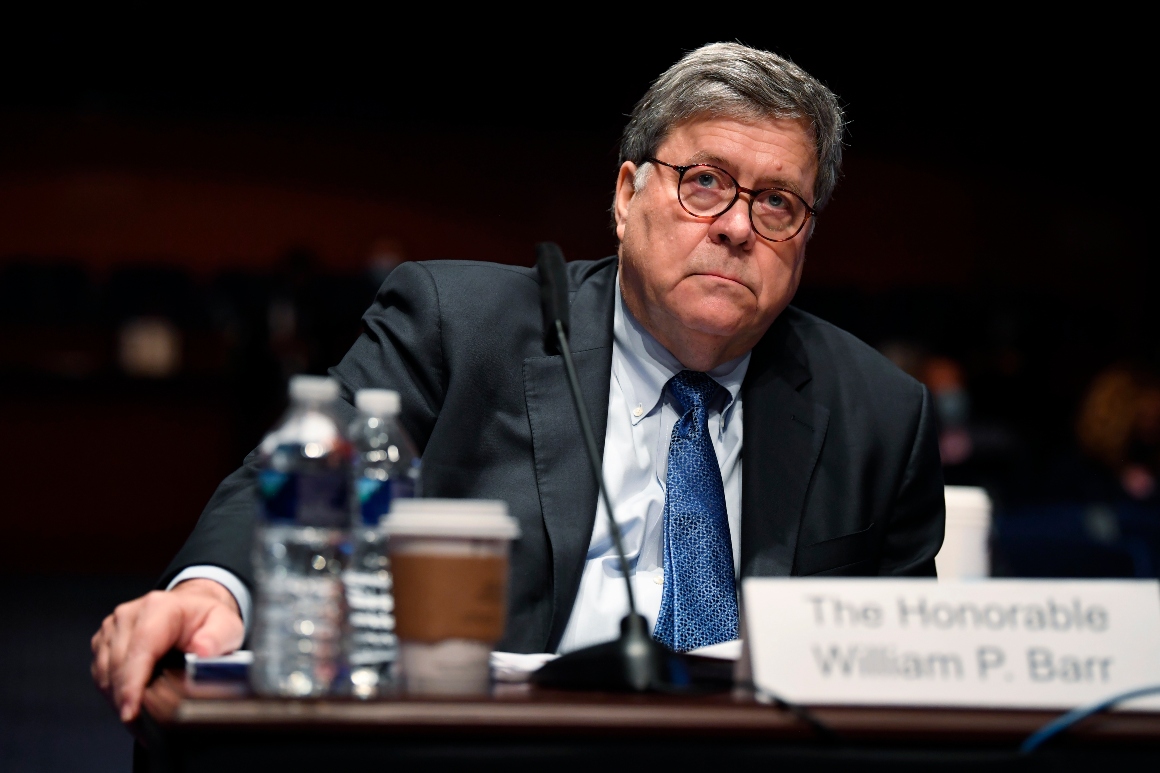 Nadler (D-N.Y.) pressed Barr on whether those deployments were ever raised in the context of Trump’s reelection. “You’re projecting fear and violence nationwide in pursuit of obvious political objectives,” Nadler said.

Barr repeatedly declined to discuss his conversations with Trump but emphasized, “I’ve made it clear that I would like to pick the cities based on law enforcement need or based on neutral criteria.”

Barr repeated his assertion that Stone’s prosecution was “righteous” and that despite Trump’s decision to commute his sentence, “I thought he should go to jail.” But he said he disagreed with career prosecutors’ initial recommendation of a seven to nine year sentence after Stone was found guilty on seven felony counts, including obstructing a congressional investigation.

“I wasn’t going to advocate that. That is not the rule of law,” Barr said.

The exchanges kicked off Barr’s long awaited — and repeatedly delayed — testimony to the panel, which arrived at the nadir of trust between Capitol Hill Democrats and the Justice Department. Committee Democrats say they intend to distill their lengthy list of urgent issues down to one theme: that Barr has reoriented DOJ to serve Trump, rather than the nation.

“Bill Barr has been elevating Donald Trump’s personal interest above that of America,” said Rep. Ted Lieu (D-Calif.). “We want to shed light on those actions and find the basis for those actions if there are any.”

It’s a hearing whose importance has been magnified not least because it’s taken more than a year to arrange. Democrats first sought Barr’s testimony in May 2019, on the heels of the release of special counsel Robert Mueller’s report on the Trump campaign’s contacts with Russia.

But Barr called it off after Chairman Jerry Nadler unveiled plans to allow staff counsel to question him. A subsequent effort for his testimony fell apart in March, after the Covid-19 pandemic overtook the agenda. Finally, Nadler threatened to subpoena Barr last month before the two sides at last agreed to the Tuesday hearing.

For Barr, the hearing largely consists of parrying the torrent of attacks from Democrats who have been eager to upbraid him on national TV — and catching his breath during what is likelier to be friendlier questions from the committee’s Republicans. After Nadler’s extended criticism of Barr, the first Republican to question him simply offered Barr the floor to respond.

In his prepared opening statement released by the Justice Department, Barr also waded into the national reckoning on race and police, saying that “every instance of excessive force is unacceptable and must be addressed, as is happening now in Minneapolis.”

But Barr’s testimony also appeared to blame nationwide protests against police brutality on rising crime rates in some cities.

“When a community turns on and pillories its own police, officers naturally become more risk averse and crime rates soar,” he said.
“Unfortunately, we are seeing that now in many of our major cities.”
Democrats practiced for the hearing on Sunday, paring down a list of concerns/complaints they acknowledge is too unwieldy to cover completely.

But the still-lengthy list is expected to include: Barr’s intervention in the prosecutions of former national security adviser Michael Flynn and longtime Trump confidant Roger Stone; his orchestration of a security crackdown against a peaceful protest in Washington D.C. last month and subsequent crackdowns in other American cities; efforts to retool the Census; lawsuits against state and local governments for their management of the coronavirus pandemic; and Barr’s removal of Manhattan’s top federal prosecutor along with similar efforts to uproot the leaders of other U.S. attorney offices handling politically sensitive cases.

Barr signaled he was ready for a clash with Democrats by slamming “the grave abuses involved in the bogus ‘Russiagate’ scandal” in his written opening remarks — a phrase he didn’t repeat in his abridged oral statement to the panel. His written statement also accused committee Democrats of trying to “discredit me by conjuring up a narrative that I am simply the President’s factotum who disposes of criminal cases according to his instructions.”

“My decisions on criminal matters before the Department have been my own, and they have been made because I believed they were right under the law and principles of justice,” he added.

Despite his defense of Trump as a hands-off president, Barr has previously bristled at Trump’s repeated efforts to lean on the department via Twitter and once said it was making it “impossible” to do his job.
Though the confrontation is likely to be fierce, committee aides say it’s unlikely to escalate to the rarely used step of on-the-spot subpoenas if Barr declines to answer questions, even if he suggests some answers might be subject to executive privilege.

“At the end of the day, a subpoena on the spot, although a dramatic tool, is not likely to resolve that situation,” said a Democratic committee counsel.

Republicans, too, have a lengthy list of questions for Barr with a completely different focus. The GOP is expected to zero in on the ongoing efforts by U.S. Attorney John Durham to investigate the origins of the FBI’s Trump-Russia probe that Mueller later took over. Trump and his allies have repeatedly predicted Durham would issue damning findings about political motivations behind the Russia probe, though lately those hopes have grown muted as hints have emerged that the investigation could linger past the election.

Judiciary Committee Republicans may press Barr on that timetable. But they’re also likely to echo his defense of the presence of federal law enforcement officers in Portland.

“It’s important to hear from them on how they’re doing this, particularly with the protection of federal property when communities have abdicated their responsibility,” said Rep. Kelly Armstrong (R-N.D.).
Armstrong predicted that Democrats would have trouble eliciting the soundbites and revealing information they’re hoping Barr provides. “He’s very good at this,” he said.