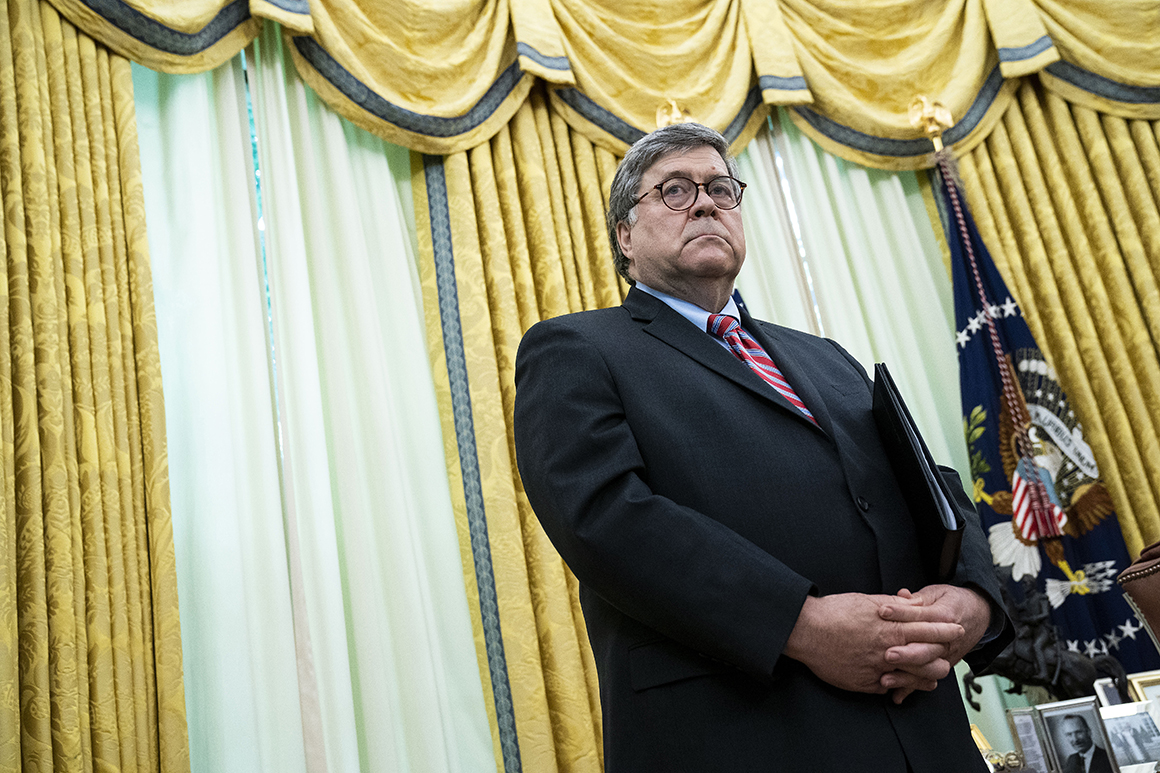 Barr went on to blame the violent incidents in Minneapolis and other cities on “far-left extremist groups,” wording that echoes comments made earlier in the day by President Donald Trump in which he suggested the chaos was caused by “ANTIFA and the Radical Left” in a series of tweets.

“Unfortunately, with the rioting that is occurring in many of our cities around the country, the voices of peaceful protests are being hijacked by violent radical elements,” Barr said. “In many places it appears the violence is planned, organized, and driven by far left extremist groups and anarchic groups using Antifa-like tactics.”

Antifa, short for “antifacists,” is a loose movement or collection of far-left groups that espouse anarchist views and argue that the social change they seek requires radical measures such as violence.

Neither Barr nor Trump has offered any evidence backing their assertions of who was behind the violence and vandalism. Barr did not take questions during his two-and-a-half minute statement delivered on short-notice to a pool television camera at Justice Department headquarters.

In response to queries after Barr’s comments about what evidence federal authorities have that “leftists” were responsible for violence at the ongoing protests, a Justice Department spokeswoman cited “information given to us by state and local law enforcement.”

Barr’s announcement came a day after the attorney general opened a federal civil rights investigation into Floyd’s death while in custody of Minneapolis police this week. One of the officers involved, Derek Chauvin, has been charged with murder.

“Accountability for [Floyd’s] death must be addressed and is being addressed through the regular process of our criminal justice system both at the state and at the federal level,” the attorney general said Saturday. “That system is working and is moving at exceptional speed. … Justice will be served.”

During a press conference on Saturday, Minnesota Gov. Tim Walz (D) and state officials estimated that a majority — about 80 percent — of the protesters arrested in Minneapolis and St. Paul were from out-of-state, while only 20 percent were Minnesotans.

“Our great cities of Minneapolis and St. Paul are under assault by people who do not share our values, who do not value life and the work that went into this and are certainly not here to honor George Floyd,” Walz said. “They need to see today that that line will stop and order needs to be restored.”

Minnesota Department of Public Safety Commissioner John Harrington suggested during the briefing that white supremacists could be responsible for some of the looting, arson and vandalism that has rocked the Twin Cities in recent days.

“We have seen things like white supremacist organizers who have posted things on platforms about coming to Minnesota,” Harrington said. “We are checking to see do the folks that we have made arrests on — and that we have information — are they connected to those platforms.”

The federal law Barr cited Saturday, also known as the Anti-Riot Act, was passed as part of the Civil Rights Act of 1968 in response to inner-city rioting in the preceding years. Some proponents of the statute said it was aimed at African-American activist H. Rap Brown, who headed the Student Nonviolent Coordinating Committee but later endorsed violence as a response to racism in the United States.

Despite the confidence Barr expressed in the anti-riot law, the Justice Department’s efforts to employ it over the years have often ended in failure.

It was most famously invoked against the so-called Chicago Seven, including David Dellinger and Abbie Hoffman, for their roles in protests at the 1968 Republican National Convention in Chicago. However, an appeals court overturned their convictions in 1972, but stopped short of striking down the law. The Supreme Court later refused to take up the case.

And just last year, a federal judge in California ruled that the statute is an unconstitutional infringement on free speech because it doesn’t require that the intent to riot be coupled with some imminent possibility of such an event.

U.S. District Court Judge Cormac Carney, a George W. Bush appointee based in Santa Ana, threw out the prosecution of three alleged members of the white supremacist Rise Above Movement for using the internet to encourage rioting at political rallies in California in 2017.

Charges were also brought under the statute against four alleged white supremacists accused of attacking anti-racist protesters during the Charlottesville, Va. “Unite the Right” rally in 2017. Judge Norman Moon, a Clinton appointee, rejected a First Amendment challenge to the prosecution.

Appeals of both rulings are pending.

While Barr emphasized Saturday that state and local officials have primary responsibility for containing the violence, he has been highly critical in recent months of some liberal local district attorneys for what he viewed as a naïve, overly lax approach to crime.

“These self-styled ‘social justice’ reformers are refusing to enforce entire categories of law, including law against resisting police officers. In so doing, these DAs are putting everyone in danger,” Barr told a sheriffs’ conference in February. “Their policies are pushing a number of America’s cities back toward a more dangerous past….These DAs think they are helping people, but they end up hurting them.”