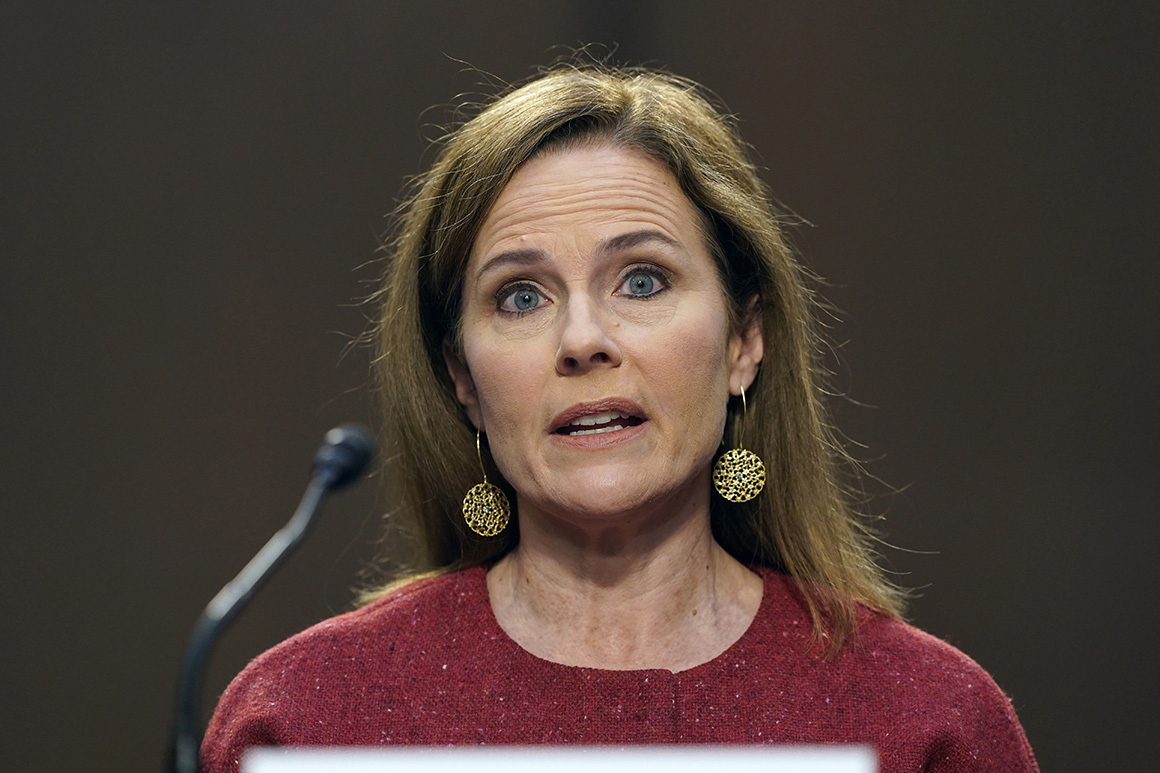 Supreme Court nominees typically avoid answering specific questions about how they would rule in cases that could come before the court. But Barrett’s responses stymied Democrats, who have zeroed in on health care as their top issue in the Supreme Court fight — in particular, protections for Americans with pre-existing health conditions. Those protections were enshrined in the Affordable Care Act.

“These are life or death questions for people,” said Sen. Dianne Feinstein of California, the committee’s ranking Democrat. “There is really great concern about … your views on that case that’s coming up.”

The Trump administration is seeking to invalidate the entire 2010 law in a case known as California v. Texas, and the Supreme Court will hear oral arguments in the case beginning on Nov. 10, just days after the election. Senate Republicans are aiming to confirm Barrett to the high court by the end of the month, which would ensure that she will be able to rule on the case, despite Democratic calls for her recusal.

“It’s a case that’s on the court’s docket, and the canons of judicial conduct would prohibit me from expressing a view,” Barrett said.

Specifically, Barrett said the legal issue at hand in California v. Texas was different than the previous Supreme Court cases challenging the 2010 law.

Barrett also refused to say whether she agrees with her mentor, Justice Antonin Scalia, that Roe v. Wade — the landmark 1973 abortion case — was wrongly decided, noting that there are ongoing cases related to abortion laws.

“You would be getting Justice Barrett, not Justice Scalia,” Barrett said. “I don’t think that anybody should assume that just because Justice Scalia decided a decision a certain way that I would too.”

Barrett added that she did not make any “pre-commitments” to the president on specific issues because such actions would “undermine judicial independence.”

Barrett, a devout Catholic, also pledged to set aside her religious beliefs if she is confirmed to serve on the high court. Under questioning from Judiciary Committee Chair Lindsey Graham (R-S.C.), Barrett said “I can” and “I have done that in my time on the 7th Circuit” Court of Appeals, where she currently serves.

Democrats are seeking to frame Barrett’s nomination as a referendum on the future of access to health care. Prior to becoming a federal judge, Barrett criticized Chief Justice John Roberts for voting to uphold the Affordable Care Act in 2012, saying that he pushed the law “beyond its plausible meaning to save the statute.”

On abortion, Barrett previously wrote that abortion is “always immoral,” but in public remarks she has suggested the law would endure in some form.

Senate Republicans have accused Democrats of anti-Catholic bias toward Barrett, but so far Democrats have declined to raise her religion during the confirmation hearings.

The Senate Judiciary Committee kicked off Barrett’s confirmation hearings Monday, with opening statements from all 22 senators on the panel and the nominee.

Tuesday marked Barrett’s first time answering questions from senators as a Supreme Court nominee. She will have a second day of questions Wednesday. Thursday’s session will consist of an outside panel of experts.

Graham has also scheduled a committee vote to send her nomination to the Senate floor on Thursday, though a final vote on Barrett’s nomination is slated for Oct. 22.

Trump nominated Barrett to fill the seat of the late Justice Ruth Bader Ginsburg, who died Sept. 18. Senate Democrats have accused Republicans of hypocrisy for moving forward with confirming Barrett so close to Election Day, after blocking President Barack Obama’s nominee Merrick Garland in 2016. But Senate Republicans have argued that 2020 is different because the White House and the Senate are controlled by the same party, unlike in 2016 when a Democrat was in the White House.

Senate Republicans are aiming to confirm Barrett before the Nov. 3 election. Trump has suggested that he will need nine justices on the Supreme Court in the event of a contested election.

Barrett’s nomination comes as control of the Senate remains a toss-up. Senate Republicans are hoping that the Supreme Court hearings will energize conservative voters, as Trump’s poll numbers continue to lag behind former Vice President Joe Biden nationally and in key swing states.

Barrett is currently a judge on the 7th Circuit Court of Appeals and a constitutional law professor at Notre Dame Law School. She previously clerked for Scalia and has said she shares his judicial philosophy.