Barrett emerges as the anti-Kavanaugh 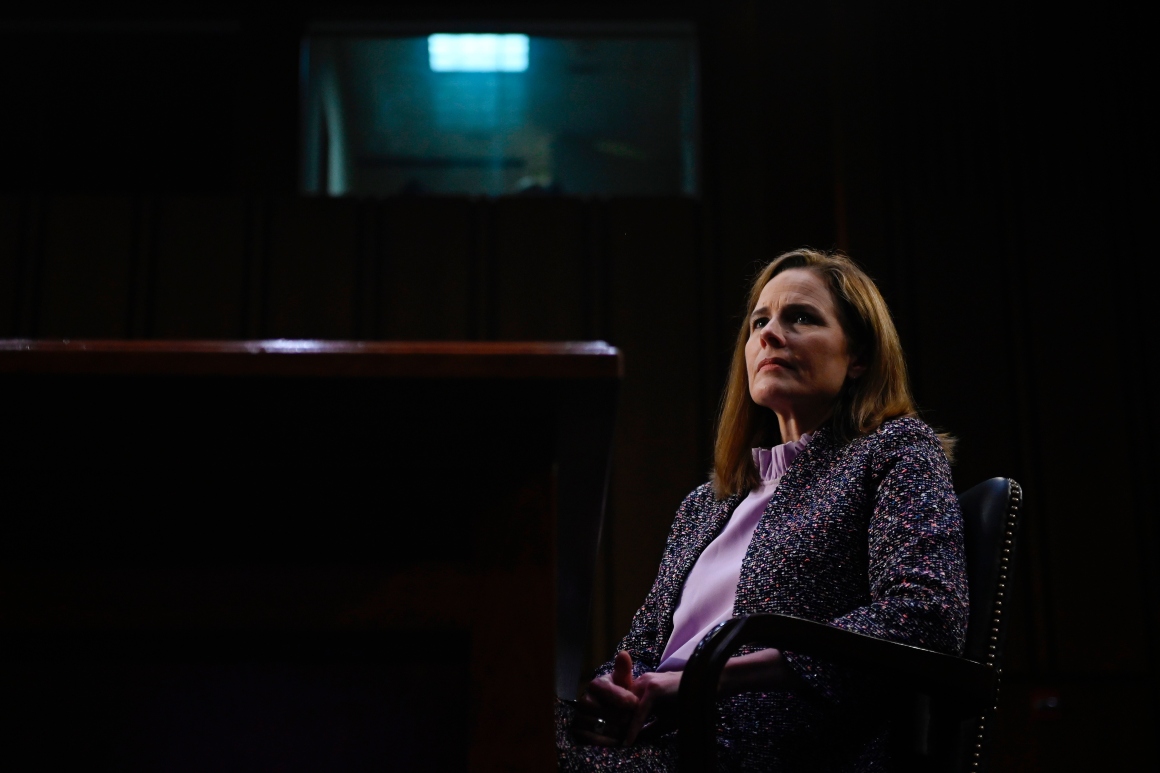 Barrett has done absolutely nothing to endanger her support among the 51 Republicans needed to confirm her. With the Nov. 3 election just 20 days away, Trump and Senate Majority Leader Mitch McConnell can’t afford the slightest delay or misstep in the confirmation process. For Republicans, Barrett delivered.

And for Democrats feeling like they are about to win back the White House and the Senate majority, their strategy of effectively keeping the entire proceedings borderline dull has gone off without a hitch. Sure, Democrats made an unrelenting case that Barrett and the GOP want to dismantle Obamacare in the courts and that she’s closely tied to Trump.

But they gave Republicans no opportunity to create a viral moment similar to Graham’s angry speech in 2018. They’ve stayed far away from any criticism of her Catholic faith, despite GOP predictions to the contrary. Even vice presidential nominee Kamala Harris, a sharp inquisitor, has largely stuck to the party’s script and launched into speeches on voting rights, health care and other issues intended to mobilize voters in November.

Forget the mass demonstrations against Kavanaugh and two women cornering former Sen. Jeff Flake (R-Ariz.) in an elevator in a last-ditch bid to derail Kavanaugh’s nomination. Today, the Senate hallways are empty. With the Capitol and congressional buildings emptied out by the coronavirus pandemic, there’s only a handful of reporters roaming around and relatively small demonstrations outside. The biggest snafu Wednesday was the sound cutting out of the room for roughly an hour. This followed the blockbuster disclosure that Barrett had a glass of wine on Tuesday following a nearly 12-hour session before the panel.

Plus, the United States remains mired in both the pandemic and a brutal economic slump, two subjects that are of far greater concern to most Americans than the distant Supreme Court fight. Perhaps most importantly, everyone in Washington knows how this is likely to end — Barrett will be confirmed as a Supreme Court justice in a matter of weeks.

“The major difference, just in terms of the environment, is there’s no suspense here,” said Sen. Richard Blumenthal (D-Conn.) when asked about the Barrett hearings versus the Kavanaugh melodrama. Democrats long felt they had a shot to stop Kavanaugh, particularly with the GOP’s narrower majority at the time. There’s no sense of that with Barrett.

Barrett, 48, is a non-Ivy League law professor who also happens to be the mother of a mixed race family with seven kids, a conservative’s dream nominee. She’s poised, prepared, and best of all, scandal-free.

Even Democratic ranking member Dianne Feinstein (D-Calif.) admitted on Wednesday to being “really impressed” with Barrett’s answer on the ongoing legal challenge to Obamacare. Three years ago, Feinstein was widely criticized after raising Barrett’s religious views at a Circuit Court nomination hearing and stating that “the dogma lives loudly within you.” During these proceedings, not one Democrat raised Barrett’s religion, although Republicans alleged the jibes are there.

Sitting with no notes in front of her during nearly 20 hours of questioning, Barrett deflected Democratic attempts to pin her down on controversial topics including abortion and Obamacare, citing the “Ginsburg Rule” of nominees expressing neutrality and open-mindedness to avoid senators’ questions.

Barrett also rebuffed Democrats’ requests to commit to recusing herself from any potential Supreme Court cases involving the presidential election, saying she won’t be “used as a pawn to decide the election for the American people.”

The hearings aren’t without controversy. Democrats complain that Barrett stretched the Ginsburg Rule so far that she’s not imparting any real information to them. To these senators and progressive groups, the deliberate opaqueness hides her real mission of cementing the Supreme Court’s rightward shift and reversing the gains made by women, minorities and liberal causes during decades of legal battles. The party remains furious that McConnell is filling a vacancy in an election year after denying Barack Obama a chance to do so in 2016, but no one was raising their voice at Barrett this week.

Yet, some of the questioning has devolved into arcane legal exchanges over “severability” and “super precedents.” While important, it’s not riveting viewing. The Judiciary Committee’s hearings for Barrett have become, in a word, boring, senators concede.

“I did not know what to expect from this. I just assumed that my colleagues were going to come out with guns blazing. I also assumed that their base would demand it,” said Sen. John Kennedy (R-La.). “My guess is that some of my Democratic colleagues are getting pretty serious pushback from members of their crank wing. [And] they’re ignoring it.”

Sign up today to receive the #1-rated newsletter in politics

Instead, Democrats were at times warm to Barrett personally, with Sen. Cory Booker (D-N.J.) thanking her Wednesday for her candor and decorum. But they also used her as a proxy to attack Trump and Senate Republicans on health care, abortion, gun violence, the environment and an array of policy disputes important to the voters they’re trying to turn out on Election Day. It’s a far more traditional approach to a Supreme Court nominee than the last one Trump picked.

“Nobody has come into the Senate Judiciary Committee to accuse Judge Barrett of having sexually assaulted them,” said Sen. Sheldon Whitehouse (D-R.I.). “I don’t know that it feels all that different than Gorsuch. Or Sotomayor. Or Kagan. Or the other ones I have been through.”

Republicans want everything to go smoothly so they can get Barrett on the court as quickly as possible — particularly with their hold on the White House and Senate in doubt — while playing up to conservative voters the fact they’ve solidified a right-leaning majority on the high court for years, maybe decades. Sure, Democrats have found plenty to crow about as Barrett declined to discuss peaceful transfers of power, dodged on saying Medicare is constitutional and wouldn’t discuss whether Trump has unilateral authority to move the election.

But none of her answers are going to lose Republican votes on the floor. At one point, Sen. Ted Cruz (R-Texas) called out Democrats for leaving the hearing during his question time (two Democrats remained in the room) and concluded that the party has “largely abandoned even trying to make the case that Judge Barrett is anything other than exceptionally well qualified.”

“They’re not even trying,” said Sen. John Cornyn (R-Texas) of attacking her credentials or suitability for the Supreme Court.

But Democrats’ tactics were intentional — and the focus on Obamacare came directly from Minority Leader Chuck Schumer (D-N.Y.). Blumenthal explained that Democrats weren’t going easy on Barrett. And he said their case is less about her but what would come next: A consequential case on the Affordable Care Act, right after the election.

“On the issues, we’re really focused and aggressive. … What’s on people’s minds? Health care,” Blumenthal added. “What is she gonna do? Take away health care.”