Battered and bruised… but standing tall: Boris fights on due to our brave NHS heroes 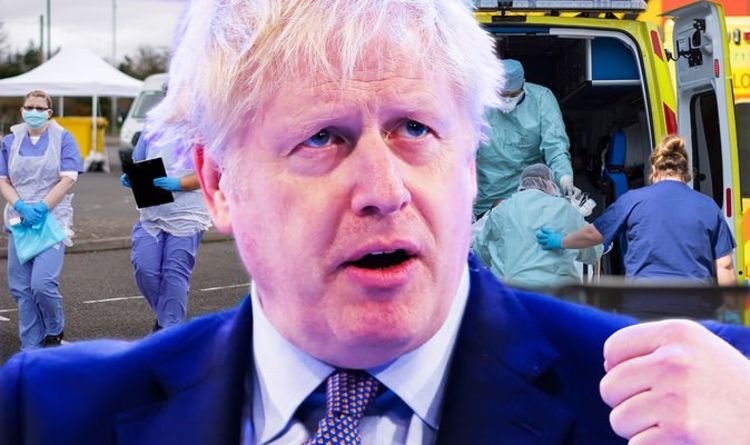 The Prime Minister was discharged from St Thomas’ Hospital in London on Sunday after recovering from coronavirus following an alarming worsening of his condition since the start of the month. Following his return to Downing Street, Boris Johnson lavished praise on the NHS staff who treated him and said they saved his life after news of his deteriorating illness sent shockwaves throughout the world. He has returned to his official country retreat of Chequers in Buckinghamshire to take some time off from the top job as he continues his full recovery.

The Prime Minister, speaking in a video released shortly after he was discharged from hospital, admitted there was a 48-hour period when things “could have gone either way”.

Mr Johnson thanked the “utterly brilliant” doctors, and praised the nurses for their “astonishing” care.

He said in the video posted on his Twitter account: “I have today left hospital after a week in which the NHS has saved my life, no question.

“It’s hard to find the words to express my debt – but before I come to that, I want to thank everyone in the entire UK for the effort and the sacrifice you have made and are making.”

Mr Johnson said he had personally “seen the pressure the NHS is under”, listing staff including cleaners, cooks and all healthcare workers, praising their “personal courage” by continuing to work and “risking this deadly virus”.

He said: “It is thanks to that courage, that devotion, that duty and that love that our NHS has been unbeatable.”

The Prime Minister reserved special praise for two medics who had looked after him – naming them as Jenny from Invercargill on New Zealand’s South Island and Luis from Portugal, near Porto.

He added: “The reason in the end my body did start to get enough oxygen was because for every second of the night they were watching and they were thinking and they were caring and making the interventions I needed.”

Mr Johnson first revealed on March 27 that he had tested positive for coronavirus after experiencing “mild symptoms”.

He entered a period of self-isolation in his flat above 11 Downing Street but just a week later revealed he had still not fully recovered and was continuing to suffer from a high temperature.

Last Sunday the Prime Minister was admitted to St Thomas’ Hospital in what Downing Street initially described as a precautionary measure, but just a day later was rushed to an intensive care unit (ICU) as his condition deteriorated.

The Prime Minister spent three nights in the ICU as the world awaited news on his condition, before being moved to a ward in the hospital.

Although Mr Johnson has temporarily handed leadership duties to Foreign Secretary Dominic Raab, he will no doubt be keen to get back to work in leading the UK’s battle against coronavirus.

The country and under-pressure NHS are now braced for a peak in patients suffering with the illness this wee in what will be a crunch period in the battle against the lethal pandemic.

The UK has so far reported 84,279 confirmed cases of COVID-19 – the sixth most in the world behind the US, Spain, Italy, France and Germany.

The death toll from the killer pandemic surged to 10,612 on Sunday, following 737 new deaths in a 24-hour period.

ByEngland's chief medical officer, Chris Whitty, told the same briefing the government was trying to ensure the measures to control the virus were the...
Read more
U.K.

Lockdown postcode checker: What tier am I in? How can I check?

BySir Keir reinstated the former leader back to the party but decided to withhold the whip until he apologises for comments made in regards...
Read more
U.K.

By"It's not against the law - and that's the whole point. You can do it within the rules that are there, but it does...
Read more
U.K.

Covid POLL: Are you planning on a big family Christmas this year? VOTE

ByBoris Johnson has urged people to "think carefully" after it was confirmed that three households will be able to form a Christmas "bubble" from...
Read more