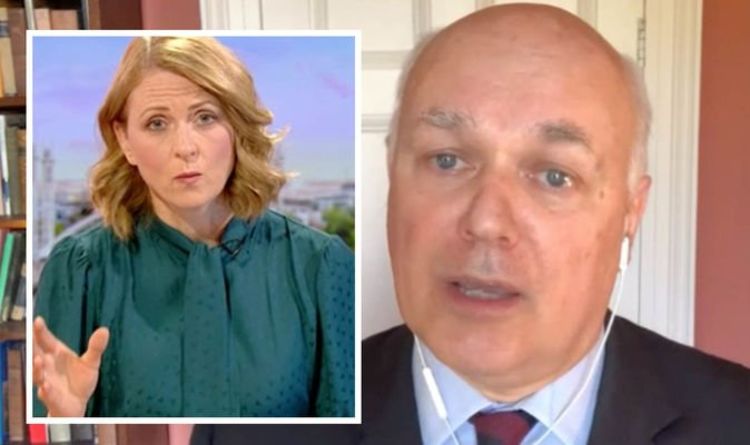 BBC Breakfast saw Rachel Burden and Jon Kay at the helm for Saturday morning’s edition of the programme and, as ever, the pair were joined by a host of guests throughout the programme and at one point, Iain Duncan Smith, former Secretary of State for Work and Pensions. However, as Burden probed him on various topics such as hospitality reopening and members of the public returning to work, BBC viewers were left slamming the MP on social media after his appearance.

This morning’s instalment saw many questions raised about the prospect of more lockdown restrictions being eased in the coming weeks.

Prime Minister Boris Johnson has set out the date of July 4 for establishments such as pubs and restaurants to reopen – but this has been met with some criticism.

Today, Conservative MP Iain Duncan Smith spoke to host Burden and backed the measures, insisting: “What we have to do is learn to live with the risk.”

However, those watching at home were left unimpressed with the former Secretary of State’s comments this morning, calling him “out of touch.”

One viewer wrote: “That mediocrity Iain Duncan Smith saying people need to gauge risk for themselves. Yes, but to do that we need clarity on the facts and potential consequences and that clarity has been woefully missing from his government.”

Another commented: “Out of touch Iain Duncan Smith blatantly putting economics before public health on #BBCBreakfast “It depends on which scientists you speak to” well that’s true of anything! You can always scrape the barrel and find a flat-earther who will tell you something you like #coronavirus.”

A third added: “Iain Duncan Smith on the BBC basically saying we need to get people back to work to make people like me more money.”

“Just watching Iain Duncan Smith on @bbc news. So in pubs you may well have to wear a face mask until you are seated at your screened off table with your own group. Doesn’t sound very appealing to me. Are people really that desperate to go out and have a drink?,” quizzed another.

“Because, the Oxford scientists and many others don’t actually think air transmission is anything like what other scientists say it is in terms of effect – they think it’s about 1.3 percent, rising at most to 2.6 percent but if you wear face masks, that lowers it to 85 percent, gets it down to about 0.5 per cent.”

He began to discuss the science behind the measures, adding: “The honest truth is – even on SAGE – scientists don’t agree, many scientists criticise the original measures because they’ve all been done in laboratories and they don’t replicate reality outside and think that, even outside the house there’s next to no risk at all.

“And, the truth is, that if you want to ask they scientists this they will constantly tell you of risk, but of course there’s risk – the virus isn’t suddenly going to disappear and we all know that.

“What we have to do, is learn to live with the risk and understand where and who it is it must effects,” he told Burden, before outlining once more who was most affected by the virus – such as over 75s.