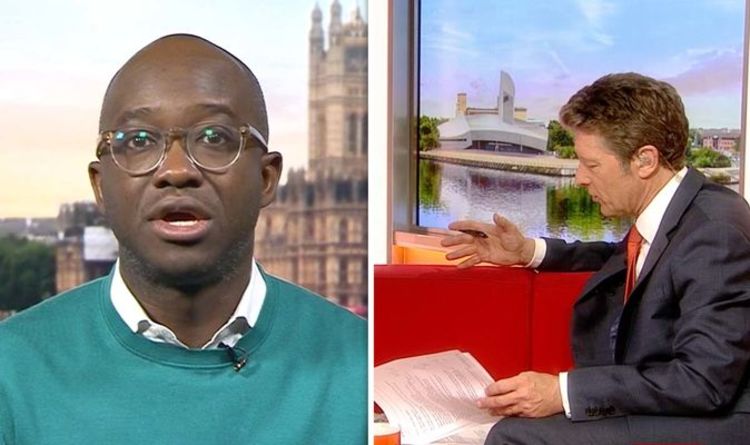 Mr Gyimah defected from the Conservatives over Brexit to affix the ardently Stay Liberal Democrats in September. Jo Swinson’s social gathering has since adopted an excessive stance on Brexit, calling for the revocation of Article 50 if she is elected Prime Minister on December 13. However the stance has infuriated many citizens, even Remainers, who view it as an affront to democracy.

Requested on his social gathering’s plummeting assist because the begin of the marketing campaign, Mr Gyimah tried to defend the abysmal polling outlook.

The BBC’s Mr Stayt requested: “When we look at the polls, the suggestion from the polls – and we treat them all with caution – is that your party’s popularity has fallen since the beginning of the campaign.”

Mr Gyimah stated: “Which I used to be answering in the event you had been to present me just some seconds to put out the argument.

“After all our ballot score is below stress. However a part of the explanation it’s below stress is the presentation that we now have a red-blue battle and that’s the solely alternative.

“However we all know within the seats we’re concentrating on to win the place we’re very aggressive, we’re those who’re taking votes off the Conservatives.

“We’re additionally taking votes off the Labour Social gathering as a result of there are tens of millions of individuals on this nation who don’t want a tough Brexit Authorities or a hard-left Labour Authorities.

“They usually see voting for the Liberal Democrats as the perfect of each worlds.

“And so in seats where we are competitive we are doing very well and there will be surprises on election night.”

However the BBC host pressed the Conservative defector: “Why is Jo Swinson not making an impact in this election campaign?”

Mr Gyimah stated: “Nicely, as I stated there was a head-head-to-head debate on the BBC yesterday and it was Boris Johnson versus Jeremy Corbyn.

“And presenting this election as a presidential system puts pressure on smaller parties.”

Shocked, Mr Stayt hit again: “So you are blaming media organisations for Jo Swinson’s inability to make a mark in the campaign?”

However Mr Gyimah insisted he was not. He stated: “I am not. What I am saying is that in terms of how the campaign is perceived of course when you have a head-to-head debate that makes people think ‘we are choosing who will be Prime Minister’.”