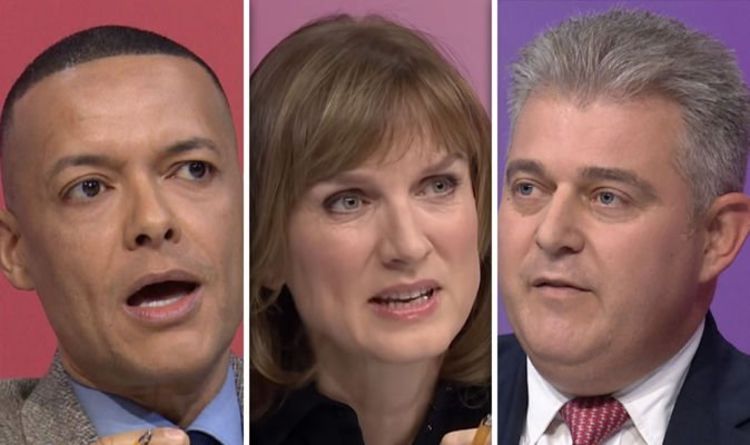 In what has been a shocking week that has seen Iran retaliate against the US following the assassination of one of Tehran’s top military generals, 170 people die in a horror plane crash and Meghan Markle and Prince Harry stand down from Royal Family life, the return of the hit BBC show in Oxford could not have come at a better time.

The panel was completed by The Economist’s Anne McElvoy and author Max Hastings.

Next week’s show will be in Liverpool.

“You do need this shock to the system sometimes.”

“Our politics is changing and we do need different people.”

Miatta said Mr Cummings is “hard to work with” and “shakes up the system”.

Clive Lewis compares him to the “undead Jonathan Harker”.

“I think special advisers play an important part in politics.”

Max Hastings said we should “restrict the weirdos to the House of Commons”.

He said he does not want to give advice to Labour.

Mr Lewis says we “should have jumped one way or the other.”

11.25pm update: Audience member says ‘we haven’t had a strong opposition party in this country for years’

11.20pm update: Clive Lewis says we are facing an “existential crisis” in democracy

Fiona Bruce asked whether this is because the Labour Party won’t get enough support on its own.

“We need to collaborate with other parties.”

“The centre ground of politics shifts all the time.”

11.18pm update: Max Hastings says he is Tory but voted for Tony Blair

However, he said he turned away from Labour because Blair decided to invade Iraq.

Audience member said “we will not see another Labour Government in 10 years.”

“I don’t believe it was a Marxist prospectus.”

11.10pm update: Audience member says ‘Trump is not just a rogue President acting on his own’

Brandon Lewis responded by saying “we do live in dangerous times which is why we want to see de-escalation.”

“This is a very good example of why we are leaving the EU.”

“I’m shocked to see Max appears to be turing into Jeremy Corbyn!”

He said the people of Iraq and Iran were pleading with their Governments on the streets.

Mr Lewis added the Government has “fallen at the first hurdle”.

“We haven’t even seen the Prime Minister!”

11.02pm update: Audience member asks whether Brexit could be impacted if the US is ‘cutting us out the loop of major decisions’

11.01pm update: Brandon Lewis says the US has the right to defend itself

“This is another example of Trump being cavalier.”

“I don’t understand what his end goal is.”

“The UK has to tell our allies when they’re being reckless… they’re putting people at risk.”

“We all want to see a de-escalation of this.”

“This is a dangerous part of the world, and we’re living in dangerous times.”

10.56pm update: Fiona Bruce asked if anyone in the audience disagreed with what they have done

No one put their hand up. Everyone agreed with the Duke and Duchess’ decision.

10.55pm update: Audience member says Harry should have gone to The Queen and spoken to her before he made a decision

Fiona Bruce said that there have been reports that The Queen was aware in some respects.

10.50pm update: Miatta Fahnbulleh said she has a lot of sympathy for Harry and Meghan

“Meghan does not conform to what some people would think a Royal must look like or act like.”

“I do think it shines a spotlight on the royal family and the monarchy… it needs to be reformed.”

“It needs to be scaled down.”

She also said that some of the money they earn should be given back to the public “because it belongs to us”.

Ms McElvoy said the question is what the role is of those who are in the outer core of the family.

She said it’s going to be hard to “pull-off” and can’t be done by an exchange of “hostile communications”.

She added: “I think most coverage is very postive in the UK.”

Brandon Lewis said it is inappropriate for him to comment.

He added that Meghan and Harry do amazing work for the country but that this is an issue for the Royal Family.

10.44pm update: Max Hastings says he feels “sorry for The Queen in all this”

He said Prince Charles, Prince William and The Queen deserve sympathy in all this.

10.42pm update: Fiona asks Clive Lewis whether it is just the media that is to blame

Mr Lewis said that Harry and Meghan have every right to make this decision.

He also said the way in which The Queen was not made aware of the situation is simply a “family matter”.

Is Harry and Meghan’s decision to step back as senior royals “petty and ill-judged”?

Clive Lewis said it is not.

He said the way she has been treated by the British media has been “disgraceful”. He mentions that some of the coverage has been seen as racist.

He added: “I think it’s up to them in the 21st century to make that decision.”

Mr Lewis also said that Harry has seen it happen before because of how his mother, Princess Diana, was harrassed by the media.

10.38pm update: Fiona Bruce opens the show in Oxford for the first Question Time of 2020

Who is Brandon Lewis?

Who is Clive Lewis?

Who is Miatta Fahnbulleh?

Who is Max Hastings?

Who is Anne McElvoy?