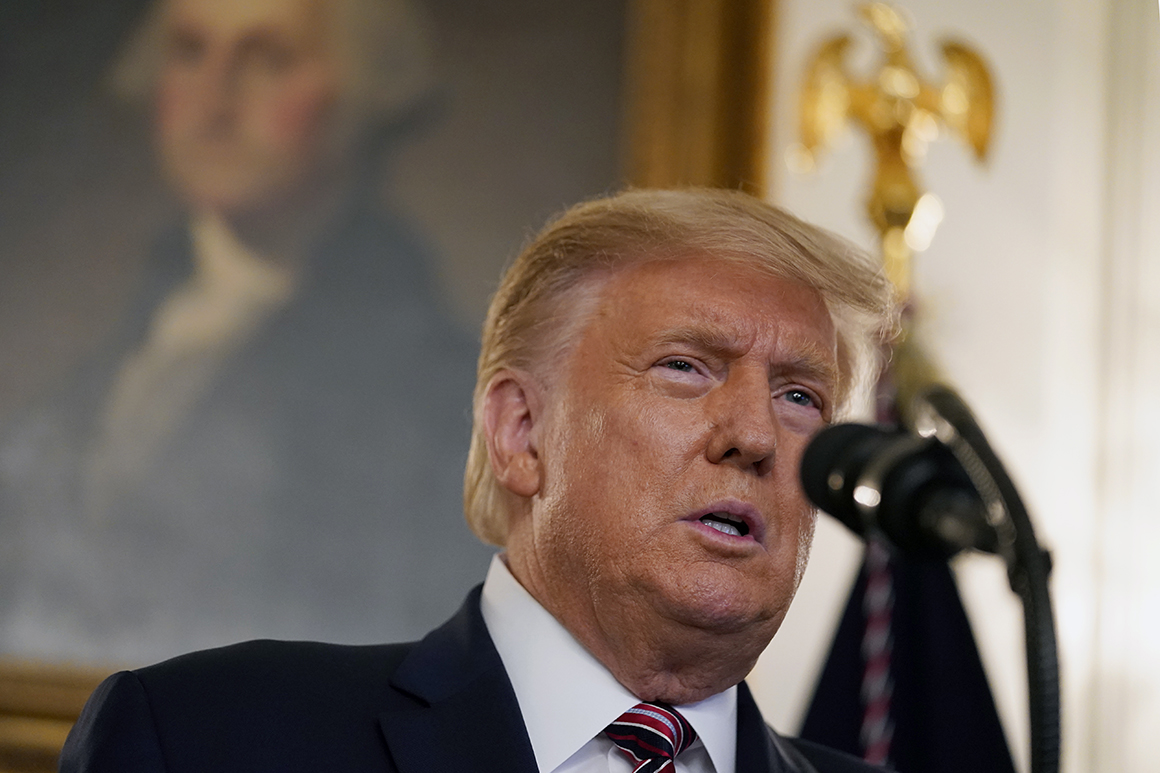 Now, Trump’s impulse may cost him as the interview transcripts and recordings are released this week, just under just eight weeks from Election Day and as some Americans start receiving mail-in ballots. The revelations in “Rage” have sent the Trump White House scrambling, with aides blaming one another for the predictable fallout from injecting even more chaos into an already challenging reelection race.

The interviews revealed that Trump was not candid with the public about the dangers of Covid-19, with the president telling Woodward he was “playing it down” even though it was possibly five times “more deadly” than the flu. “I still like playing it down, because I don’t want to create a panic,” Trump said in one audio clip released Wednesday.

As the White House and Trump campaign sought to tell a different story this fall about their handling of coronavirus, the book’s release is renewing attention on the president’s early missteps in a crisis that continues to disrupt hundreds of millions of American lives. The book’s rollout will continue this weekend as Woodward sits for a “60 Minutes” interview ahead of its wide release on Sept. 15. CBS said Wednesday the segment will also feature audio recordings of the president’s interviews.

In 2018, White House aides shielded Trump from an interview for his book “Fear” because they didn’t want to give the author more ammunition than he already had. The book was withering — portraying the Trump administration suffering a “nervous breakdown” with anecdotes from current and former aides inside and outside the administration.

Trump learned about the book late in the process and called Woodward in frustration. “It’s really too bad, because nobody told me about it, and I would have loved to have spoken to you,” he said in audio released by The Washington Post at the time.

He made clear to aides that he would participate in the next book, convinced that he could charm and cajole a veteran Washington journalist into seeing his point of view.

At least two sit-downs with the president occurred in the Oval Office — and far more frequently, Trump would call Woodward directly at night with the White House call log as a record. (The log records the time and length of the president’s calls but not the content, one aide said.)

Throughout the process, several top aides raised concerns among themselves about the access and where it would lead. And they worried about the president’s tendency to overshare his ideas in often blunt language. But aides also resigned themselves to the months-long process of Woodward interviews and calls, knowing the president was interested himself.

“Sometimes the president does a nontraditional thing, and you get a surprising result,” said one senior administration official. “But I don’t think any of us recommended doing it.”

On Wednesday, Trump called the book “another political hit job” — despite the recordings of the president’s own words. And he defended the way he downplayed the virus early on by saying that “you cannot show a sense of panic or you’re going to have bigger problems that you ever had before. Please.”

When asked why the president would sit down with Woodward for 18 interviews when his first book was so critical, White House press secretary Kayleigh McEnany said it was because Trump was the “the most transparent president in history.”

McEnany spent most of a press briefing on Wednesday answering questions about the excerpts of the book, contradicting the president’s own words released in audio recordings. “The president never downplayed the virus. Once again, the president expressed calm,” she said in trying to explain the gap between the president’s public versus private comments on the virus.

Democrats pounced on the revelations, believing they demonstrated why Trump did not deserve reelection this fall. “It was a life and death betrayal of the American people,” former Vice President Joe Biden told reporters Wednesday ahead of an event in Warren, Mich. “He knew and purposely played it down. Worse, he lied to the American people.”

“The president’s own words spell out the devastating truth: Trump was fully aware of the catastrophic nature of the coronavirus but hid the facts and refused to take the threat seriously, leaving our entire country exposed and unprepared,” Democratic House Speaker Nancy Pelosi said.

In response to the book’s revelations, White House aides quickly started blame one another. Newer White House staffers tried to pin the decision to help Woodward on previous offices or particular aides, even though the president himself made the call to work with the author.

The interviews took place over a few iterations of the White House staff, including during the tenures of acting chief of staff Mick Mulvaney and current chief of staff Mark Meadows, with Woodward reporting through most of the summer. His first meeting with Trump occurred in early February at the White House.

As distressing as several White House aides found the excerpts, they spent part of the day just trying to track down a copy of the book. The White House struggled to respond to audio of the president’s interviews, as well as on-the-record quotes from Kushner — evidence that forced them to argue that, at best, some of the remarks deserved more context.

The access does not seem to have brightened Woodward’s view of the president. The author bluntly concludes his book with the assessment that “Trump is the wrong man for the job.”

Trump’s decision to cooperate was seen as partly based on his respect for the Watergate reporter as an institution, the officials said, a rite of passage ritual numerous other presidents have gone through. They compared it to his 1980s cultural mindset that put special value on Time magazine covers and The New York Times.

“Trump loves brands, and Woodward has been the gold standard for 50 years of investigative journalism around the presidency, so it’s the same reason why he likes the Gray Lady, he likes The New York Times. It’s the paper of record traditionally in his hometown, so even though both excoriate him, he’s attracted to them the way a low-IQ small moth would be to a flame,” said Anthony Scaramucci, who briefly served as White House communications director under Trump. “Trump is always convinced that if he talks to the person, he is going to elucidate and enlighten that person and get them to like him.”

Trump thought he could curry favor and shape the coverage similar to the way he did in New York City in the 1980s and ’90s with the tabloids, one Republican close to the White House said, but “it’s different when you control the nuclear codes and when you are the most powerful man in the world. The stakes are higher.”

Republican Sen. Lindsey Graham also helped to persuade Trump to participate in the book and told him that President George W. Bush once cooperated with a Woodward book and it turned out far better as a result, one White House aide said. Graham did not return a call for comment.

Bush’s longtime strategist Karl Rove remembered it differently, however. “Every president does a Bob Woodward book and gives him plenty of interviews and then later comes to regret it, and this is probably one of those instances,” he told Fox News on Wednesday.

The desire to speak to Woodward reminded some aides of Trump’s insistence that he could also sit down with special counsel Robert Mueller. In that case, Trump’s lawyers feared the president would say something untrue under oath, and they managed to negotiate supplying only written answers to Mueller’s questions.

Before Palmieri’s tenure, the Obama administration gave what was then considered significant access to Woodward for his 2010 book on Afghanistan. That included a sit-down interview for just over an hour.

One White House aide tried to wave it off as yet another damning Trump book in an already crowded field, one that wouldn’t add much to what’s already known.

“Everyone has a book,” a second senior administration said with a shrug.