Ben Stokes could face disciplinary action after appearing to call... 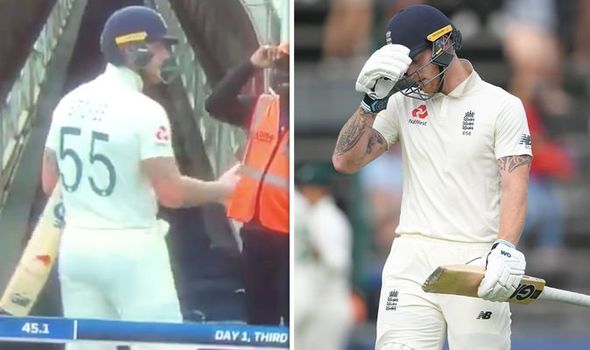 England cricket star Ben Stokes appeared to be involved in an altercation with a fan after he was dismissed for 2 in their first innings in the fourth Test against South Africa. When walking off the ground he was caught on camera appearing to call them a ‘four-eyed c***’.

Sky Sports later apologised for any offence caused when they accidentally aired the footage of Stokes walking back to the dressing room.

The Sports Personality of the Year winner appeared to be angered by whatever the supporter had said to him and reacted immediately.

Stokes had been dismissed when he edged to Rassie van der Dussen off the bowling of Anrich Nortje.

England currently lead the four-match series 2-1 with the final game being played in Johannesburg.

Stokes has been in fine form throughout the series against South Africa with both bat and ball.

But the World Cup hero could now face disciplinary action with the footage caught on camera.

Ben Stokes appeared to be unhappy with whatever was said to him by a fan (Image: SKY SPORTS)

Buttler was upset at what he perceived to be Philander obstructing his view of the ball as he tried to track it from behind the stumps.

Stokes, fielding at slip, advised Buttler: “Let’s just get him out.”

To which Buttler responded: “Can’t get past that f***ing gut.”

Buttler was fined 15 per cent of his match fee and given one demerit point by the ICC.

Stokes could now face similar consequences after appearing to be caught in an x-rated tirade towards a supporter.

After the final Test match, England will take on South Africa in three One Day Internationals and three T20 internationals.

Stokes will hope to play a major role in both of those series.