Bernie Sanders is suspending his 2020 presidential campaign, ceding the Democratic nomination to Joe Biden after a string of losses last month crippled his campaign.

He announced his decision during an all-staff conference call Wednesday morning. The Vermont senator told his aides that this was not just a presidential campaign, but a movement, and to be proud of what they’ve accomplished.

During a livestream announcing that he is dropping out, Sanders finally acknowledged that “the path toward victory is virtually impossible.”

And he argued that it has already won the ideological struggle. "A majority of the American people now understand that we must raise the minimum wage to at least $ 15 an hour hour, that we must guarantee health care as a right … it was not long ago that people considered these ideas radical.”

"The greatest obstacle to real social change has everything to do with the power of the corporate and political establishment to limit our vision,” he said.

"If I believed we had a feasible path to the nomination, I would certainly continue the campaign. But it’s just not there," Sanders said. "I congratulate Joe Biden, a very decent man, who I will work with to move our progressive ideas forward."

Sanders said that while Biden will be the nominee, he will stay on the ballot to collect delegates for the convention, "where we will be able to exert significant influence over the party platform.”

As recently as Monday, his team told aides it was looking for a regional delegates coordinator, according to an internal email.

By dropping out of the race, Sanders is forgoing any effort to soldier on purely as a movement candidate for his progressive agenda. That prospect — though appealing to many of his most ideological supporters — appeared to dim recently amid the deadly coronavirus outbreak, which has shut down campaign rallies, delayed upcoming primaries and consumed the public’s attention.

“Bernie has put his heart and soul into not only running for president, but for the causes and issues he has been dedicated to his whole life. So, I know how hard a decision this was for him to make — and how hard it is for the millions of his supporters — especially younger voters — who have been inspired and energized and brought into politics by the progressive agenda he has championed,” said Biden in a statement. “Bernie has done something rare in politics. He hasn’t just run a political campaign; he’s created a movement.“

Sanders’ withdrawal marks the culmination of one of the most dramatic turnarounds in presidential primary history, with the Vermont senator on the losing end. A month and a half ago, Sanders appeared in control of the nominating contest, coming off early victories in New Hampshire and Nevada. 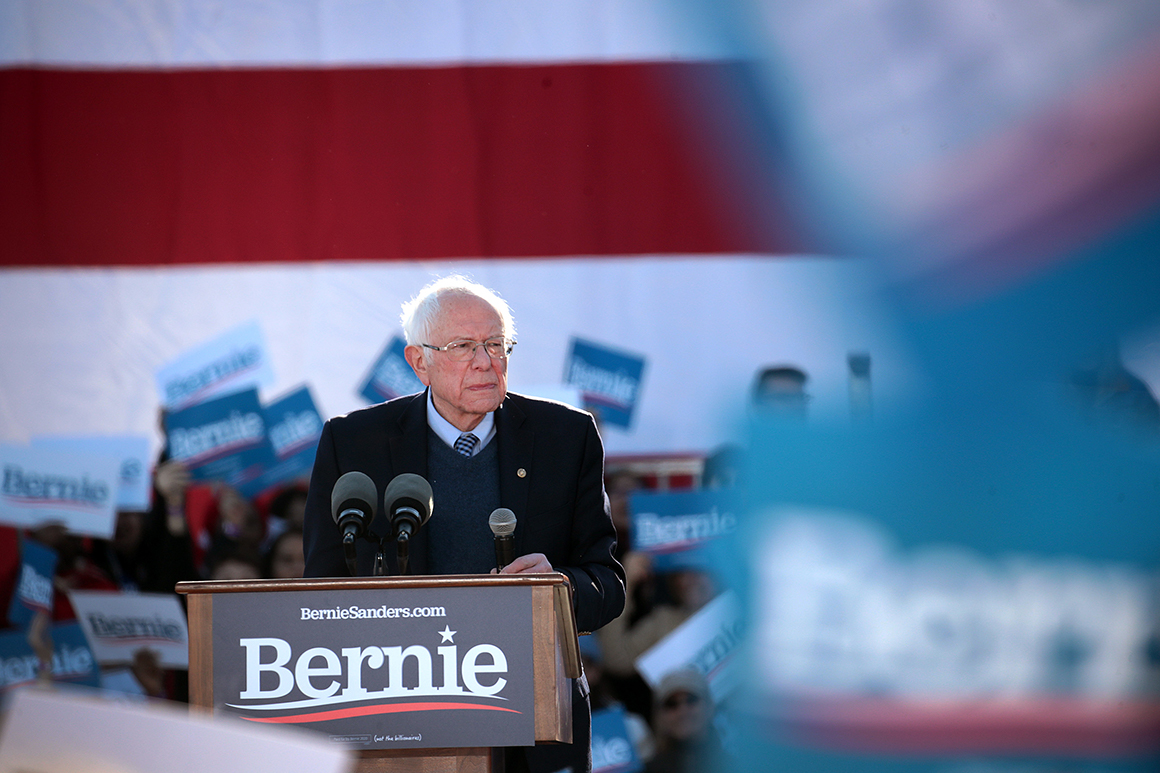 But Biden’s victory in South Carolina led rank-and-file voters, and a number of former rivals for moderate support in the Democratic primary, to coalesce around the former vice president, who drubbed Sanders in 10 of 14 states on Super Tuesday and nearly all of the states that came later in March, including a three-state sweep — Arizona, Florida and Illinois — as well as the critical general-election state of Michigan. His withdrawal came a day after the Wisconsin primary, whose result has not yet been announced but was expected to be bad for Sanders.

For the last year, Sanders has driven the Democratic primary in many ways, putting signature policy proposals like Medicare for All at the center of the nominating contest and pulling other candidates to the left on a number of issues. Before Sanders’ withdrawal, Biden incorporated one of the Vermont senator’s priorities into his own campaign platform, proposing to make public colleges and universities tuition-free for students whose family incomes fall below $ 125,000. In recent weeks, Biden’s campaign has also been talking privately with some of Sanders’ allies, such as the climate change-focused group Sunrise Movement.

After Biden’s mid-March primary wins, the former vice president credited Sanders and his supporters for an effort he acknowledged had “shifted the fundamental conversation” in the United States on a number of issues.

But Sanders was unable to deliver on the key electoral premise of his campaign.

After proclaiming all year that he would win by increasing voter turnout, Sanders failed to expand his coalition, neither making significant inroads with black voters nor turning out young voters in sufficient numbers to defeat Biden — though Sanders did win younger voters by wide margins despite Biden’s overall dominance.

By bowing out now, Sanders is largely forgoing a repeat of the lengthy, bitterly contested nominating contest against Hillary Clinton during his 2016 campaign. His exit will cheer moderate Democrats who feared Sanders’ continued presence in the race would exacerbate fractures in the party ahead of the general election. Calls for Sanders to get out of the race intensified following post-Super Tuesday losses in Michigan and other states.

Sanders can now begin to claim a mantle that eluded him in 2016 — unifier. The 78-year-old Sanders remains popular with young people whose votes Biden will need in the general election. Biden has appeared to recognize as much, thanking Sanders and his supporters “for their tireless passion” on one primary night last month and speaking directly to Sanders’ young backers in subsequent appearances. 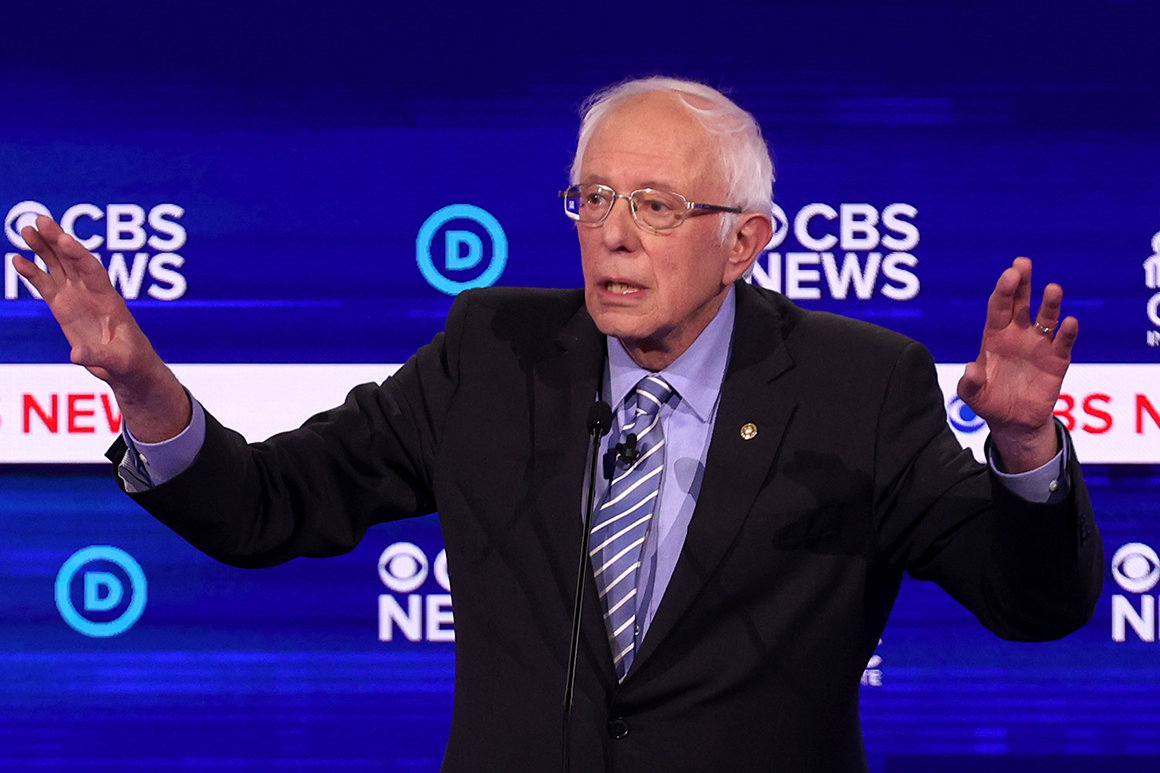 “Let me say especially to the young voters who have been inspired by Senator Sanders: I hear you,” Biden said. “I know what’s at stake. I know what we have to do. Our goal as a campaign and my goal as a candidate for president is to unify this party and then to unify the nation.”

President Donald Trump, who has sought to fan Democratic Party divisions by frequently suggesting that Sanders was being mistreated by the party establishment, responded quickly to Sanders’ suspension of his campaign.

“Bernie Sanders is OUT! Thank you to Elizabeth Warren. If not for her, Bernie would have won almost every state on Super Tuesday! This ended just like the Democrats & the DNC wanted, same as the Crooked Hillary fiasco. The Bernie people should come to the Republican Party, TRADE!“ the president tweeted.

In conceding before he is mathematically eliminated, moderate Democrats argue Sanders may be better positioned to bargain with Biden on appointments, speaking time at the Democratic National Convention and input on the party platform. Some of Sanders’ allies, however, had pushed him to stay in the race under the assumption that he would have more leverage to push the platform to the left if he continued to amass delegates for the convention.

That Sanders lasted this long was startling to many Democrats who underestimated his strengths coming into 2020. Unlike in 2016, the Democratic Party’s primary field this year included other progressive Democrats, including Elizabeth Warren, Sanders’ fellow senator and friend.

For several months last year, she eclipsed him in national polls. But Sanders had an army of volunteers that he carried over from 2016 and millions of dollars in small-dollar donations to fund a barrage of television advertisements. His call for Medicare for All, once viewed as a liability, proved popular with Democrats, with it winning support from a majority of voters even in primaries he lost. He drew thousands of people to his rallies.

Had moderates not closed ranks around Biden so quickly, Sanders might have won.

Days later, he had carried California but lost races elsewhere — beginning a string of losses in states Sanders had carried in 2016.

By mid-March, Sanders seemed to see the end. He told ABC that he is “not a masochist who wants to stay in a race that can’t be won.” But he insisted that he still had a “narrow path” to the nomination, though he wouldn’t explain what it was.

He will end his second presidential campaign where he left his first one: losing to a more moderate candidate, in a party yet to shift as far left as Sanders.