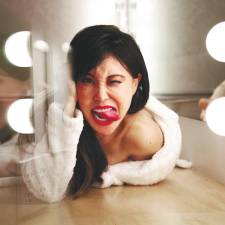 YOGA or fitness – when we mention these words, our mind automatically goes to activities and exercises involving the body, and not the face.

However, just as there are separate skincare lines for the face or body, there is a new yoga trend entirely for the face.

Just like ‘regular’ yoga, face yoga helps to isolate and tone the facial muscles, allowing people to lift their faces naturally through simple exercises instead of turning to Botox and plastic surgery.

face yoga stimulates blood flow in the face, spurring the production of collagen to tighten and plump up the skin, delaying the appearance of fine lines and wrinkles.

According to face yoga instructor Koko Hayashi, face yoga is a great natural solution to regaining your youthful appearance.

Hayashi’s foray into face yoga began after a bad plastic surgery experience at age 27, when a chin implant failed. She decided to remove the implant, but her chin did not retain its original shape. Instead, it was slightly distorted and tilted to one side.

This setback motivated the Japanese-born Hayashi to pursue the natural beauty method. She began practising it over a decade ago, and became a face yoga instructor herself in 2018, and has since inspired others all around the world.

Now at 41 years old, the still-youthful Hayashi has appeared on several television shows, including Magic for Humans on Netflix, Shark Tank, and the popular Keeping Up With The Kardashians, where she taught face yoga to Kim Kardashian.

To date, her Youtube videos showing her exercises have generated over 17 million views.

Hayashi exclaimed: ”face yoga is a great natural solution to regain your youthful appearance. Being based in Los Angeles, it is a rare opportunity for me to be able to interact with a Southeast Asian audience and I am extremely glad to be working with Supparetreat, which has made this possible.”

Before the 60-minute session began, Hayashi explained that most people do not use all the muscles in their face, especially those under their eyes. These are otherwise known as “sleeping muscles”.

She added that the most overworked muscles are in the middle of the eyebrows on the forehead, and that the tension in the muscles needs to be cleared.

“We need to lift or wake up the sleeping muscles, while relaxing the overworking muscles,” said Hayashi.

“Each person needs to do three or four postures for at least 10 seconds [each] several times a day, which amounts to spending three to five minutes per day.”

Declaring herself the “face Police”, Hayashi began assessing “bad facial expressions” or postures, or in her own words, Resting B***h face, whereby the corner of the mouth is turned down, before she started warm-ups with cheek vibration exercises.

The funny and energetic Hayashi shared tips about things that one hardly pays attention to, such as the correct position of the tongue inside the mouth, the proper way to chew food on both sides of the mouth, and how a simple smile makes a difference to facial muscles and relaxes the mind.

She guided media members through both easy and difficult postures – for example, moving the lower eyelid for eye bag problems –and taught techniques for a balanced face, as well as facial movements to prevent cheeks from sagging.

The session was insightful and really opened up my mind about our facial muscles, expressions and their effects, and how certain things can take a toll on our face; for example, sleeping face down on a pillow.

“I heard that they are very beauty conscious, but don’t know much about face yoga, so it’s my mission to introduce them to it.

“We aim to certify more instructors all over the world, hopefully in Malaysia soon.”

Asked what she would recommend to Malaysian women, she said: “Many work in front of [computer] screens and it’s easy to develop a slouching posture. That causes the skin to sag even more.

“So, keep positioning your head [in line with] your buttocks, keep your tongue on the palate, lift your mouth’s corners slightly up, and reduce the tension between your eyebrows. This is your face posture when it is resting, which is the most important basic [position] for face yoga.”

And remember to smile always – as Hayashi would say, it’s good for your face!

UPDATE: Call of Duty Modern Warfare and Warzone's Season 6 roadmap has been revealed by Activision. Season 6 has a September 29 release date and...
Read more
Entertainment

Reluctant European by Sir Stephen Wall (Image: OUP)Thus he is well placed to write this book, published just as the transition period is entering...
Read more