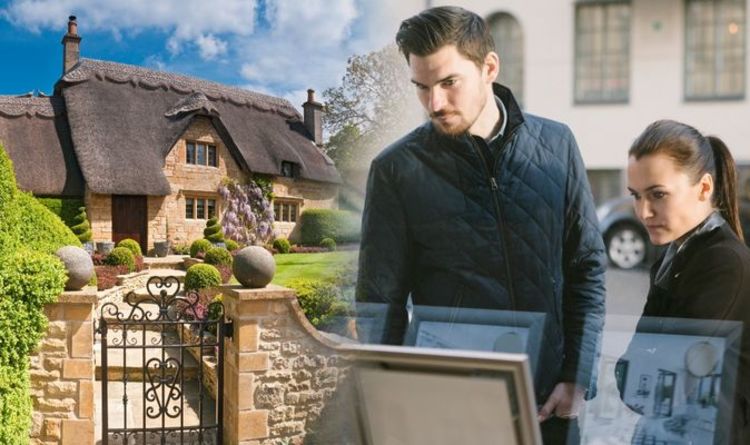 In fact, the number of people looking to move from the town to the country rose by 126 percent in June and July compared to the same period last year.

According to the estate agents the shift in more buyers looking to move outside cities began in April and is continuing, with the uplift in village enquiries most notable among people living in Liverpool, Edinburgh, Birmingham & London.

The number of enquiries from Liverpool residents looking for a village lifestyle has almost tripled (+275 percent) compared to last year, versus a 63 percent increase in enquiries to towns.

This city is followed by Edinburgh where village enquiries are up 205 percent, and Birmingham, up 186 percent.

Only one out of the 10 cities – Leicester – has seen a bigger increase in enquiries to move to towns than to villages.

READ MORE: Inheritance Tax UK: How rules on property could affect your estate and final bill

Most of the top village destinations that people in cities are moving to are still within a commutable distance to their city, however.

Rightmove’s property expert Miles Shipside said: “The lure of a new lifestyle, one that is quieter and has an abundance of beautiful countryside and more outdoor space, has led to more city dwellers choosing to become rural residents.

“We saw a shift as early as April in more people living in cities enquiring about moving out of that city, and this trend has continued.

“The most popular village moves are still within the same region the home-hunters are currently in, as it’s likely they’ll keep their current job but may have the flexibility to commute less often and set up their working space at home.”

According to the stats, those living in Birmingham are most likely to want to escape to Banwell, Somerset.

Those living in London have their eye on Iver, Buckinghamshire, while those living in Edinburgh are mostly to want to live in West Linton, Peeblesshire.

Birmingham residents are most likely to want to move to Marlbrook, Worcestershire and those living in Manchester will probably have their eye on Charlesworth, Derbyshire.

Mark Rimell, Director in Strutt & Parker’s Country House Department, says: “I lived in London for 20 years and was full of trepidation about a move to the country, not least the thought of becoming a commuter.

“I needn’t have worried, the benefits far outweigh the disadvantages, not least a village school, a pub, a church and a local store.

“The anonymity of living in London gives way to a friendly, welcoming approach which is refreshing to say the least.

“Houses in or on the fringes of a village will by nature benefit from being surrounded by some of the most wonderful landscapes; from National Parks and Areas of Outstanding Natural Beauty to over 10,000 miles of coastline. Having this on your doorstep is invaluable and very much sought after.

‘A slower pace of life, outdoor space and tight knit communities come hand in hand with village living – something many have come to appreciate in recent months and have enduring appeal.”

Those looking to update their homes can get vouchers for their homes.

In Martin Lewis’ property vouchers advice The Money Saving expert explained that some property owners will soon be able to pick up the slips worth thousands of pounds.

In an announcement made by Chancellor Rishi Sunak in July, it was stated some Britons would be able to get government funding for energy-efficient home improvements.

It came as part of a £2billion grant scheme that would allow some homeowners in England to get money to do up their property.