Just as you thought it was safe to go back to ignoring Betelgeuse, the red giant star started acting up again. After its first round of dimming, and then brightening, Betelgeuse has now started to dim once again.

Moreover, this new dimming is inconsistent with Betelgeuse’s current brightness variation cycle – so, once again, the star is moving into the spotlight.

Betelgeuse, 700 light-years away in the constellation of Orion and one of the brightest stars in our sky, is also one of the most interesting. That’s because it’s very old, around 8 to 8.5 million years, and practically at death’s doorstep, for a star.

It is thought to be between 10 to 25 times the mass of the Sun, and lived most of its life as a hot, blue-white massive star. Now, its main-sequence days of fusing hydrogen in the stellar core are done; Betelgeuse ran out of hydrogen some time ago, and it is now fusing helium into carbon and oxygen.

Once it runs out of helium, it will fuse heavier and heavier elements, causing a buildup of iron in the core that will eventually cause the star to go supernova. But, although dramatic dimming is expected just before the Great Kaboom, this time is not quite yet upon us. It will be, astronomers predict, a few tens of thousands of years yet.

Its dimming event that took place between September 2019 and February 2020, nicknamed the Great Fainting, certainly was dramatic, dimming the star’s brightness by almost 25 percent.

Betelgeuse is a semi-regular variable star, which means its light does fluctuate a little on regular cycles. The longest of these cycles is around 5.9 years. Another is 425 days. The Great Fainting was very close to the minimum of both of these cycles, but it turned out that they had little to do with the event.

Astronomers are now pretty sure that it was just a sneeze: Betelgeuse ejected a bunch of material that partially obscured it for a time; not unusual for a star of such a venerable age.

“We see this all the time in red supergiants, and it’s a normal part of their life cycle,” said astronomer Emily Levesque of the University of Washington in March.

“Red supergiants will occasionally shed material from their surfaces, which will condense around the star as dust. As it cools and dissipates, the dust grains will absorb some of the light heading toward us and block our view.”

So, that’s that mystery solved. But the new dimming will also need to be investigated. Although it’s not as dramatic as the Great Fainting, it is not consistent with the star’s variability cycles.

Betelgeuse’s next brightness peak is due to take place … well, now-ish, August and September 2020. Therefore, it should have been gradually brightening all year.

The star’s brightness has actually been a little difficult to track, since Betelgeuse’s position in our sky moved behind the Sun from May to early August. But NASA’s Solar and Terrestrial Relations Observatory (STEREO) in a solar orbit that trails behind Earth, meaning it could keep an eye on Betelgeuse for part of the time that it was obscured from Earth view. 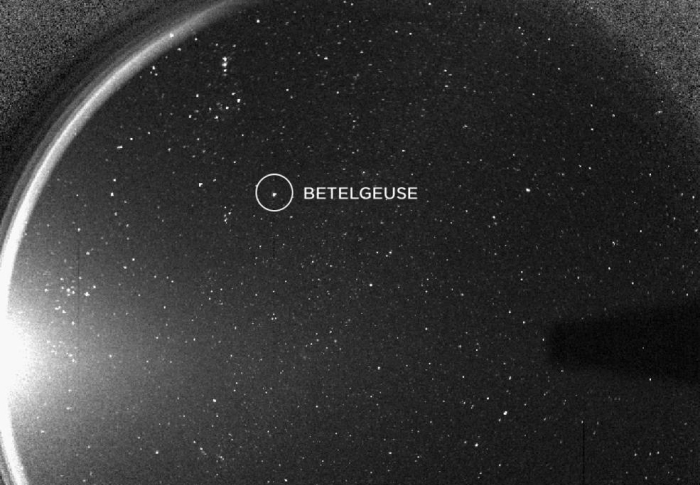 And, from May to July, when STEREO was observing it, the star was not brightening. Quite the opposite.

“Surprisingly, instead of continuing to increase or level off in brightness, Betelgeuse has decreased by ~0.5 mag from mid-May to mid-July,” wrote a team of scientists headed by Andrea Dupree of the Harvard Smithsonian Center for Astrophysics in an Astronomer’s Telegram dispatch.

“Spanning the STEREO observations, the star dimmed at a rate of 5 mmag/day.”

The good news is that Betelgeuse is once again visible in our skies, so more observations can be taken. STEREO’s Heliospheric Imager recorded the star’s brightness in visible light, but more instruments can reveal, for example, temperature changes – to confirm or rule out sunspot activity – and whether the star is changing in size, as was found in the case of the Great Fainting.

According to its 425-day cycle, Betelgeuse was next due to dim in April 2021. But, aside from its known cycles, the star can be quite unpredictable, and has complex variations in its light that we just don’t understand very well.

So, maybe this premature dimming could actually be illuminating, helping us understand what’s going on inside what seems to be a very rumbly, unquiet star indeed. And, in turn, that could help us to understand the processes occurring at the end of the lives of massive stars, in their dying years.

“It will be important,” the researchers wrote, “to continue to follow Betelgeuse closely through 2020/21.”