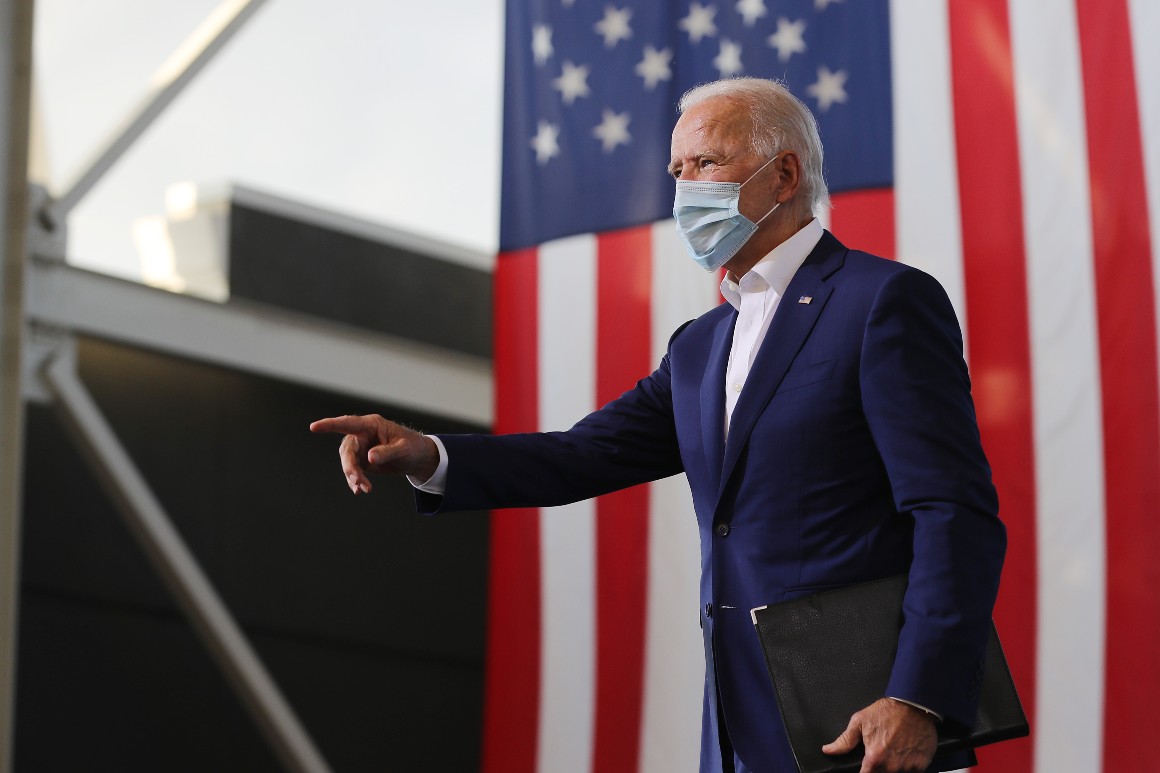 The Post’s story drew immediate comparisons to 2016, when Russian hackers dumped troves of emails from Democrats onto the internet — producing few damaging revelations but fueling accusations of corruption by Donald Trump.

There was no immediate indication of Russian involvement in the release of emails that the Post obtained, but its general thrust mirrors a narrative that U.S. intelligence agencies have described as part of an active Russian disinformation effort aimed at the 2020 election.

The story also amplified a line of attack Republican senators have pursued in recent months, culminating in a report that leveled a farrago of accusations against Hunter Biden. The cast of characters is equally familiar: Rudy Giuliani, the president’s personal attorney whose amateur sleuthing in Ukraine helped lead to Trump’s impeachment, features prominently in the story, as does Steve Bannon, the 2016 Trump aide who steered opposition research that portrayed Clinton as corrupt but were often misleading or factually dubious.

Despite Trump-driven allegations of self-dealing and corruption, multiple investigations by Republicans and Democrats have shown no evidence that Biden — the Obama administration’s point-man on diplomacy with Ukraine — took actions counter to official U.S. policy. In fact, multiple senior officials testified during the House impeachment inquiry last year that Biden’s work made it more likely that Burisma would face a robust corruption investigation, his son’s position on the board notwithstanding. Though some officials indicated Hunter Biden’s board position created the “appearance” of a conflict, they said it never affected official U.S. policy.

In a statement, Biden campaign spokesman Andrew Bates said, “we have reviewed Joe Biden’s official schedules from the time and no meeting, as alleged by the New York Post, ever took place.”

“Investigations by the press, during impeachment, and even by two Republican-led Senate committees whose work was decried as ‘not legitimate’ and political by a GOP colleague have all reached the same conclusion: that Joe Biden carried out official U.S. policy toward Ukraine and engaged in no wrongdoing. Trump administration officials have attested to these facts under oath,” Bates said.

Bates added that the Biden campaign could not immediately respond to the story’s allegations in the Post story when it ran on Wednesday morning, because the publication “never asked the Biden campaign about the critical elements of this story. They certainly never raised that Rudy Giuliani — whose discredited conspiracy theories and alliance with figures connected to Russian intelligence have been widely reported — claimed to have such materials.”

The Post did not address the Biden camp’s complaints, instead pointing to an editorial that accused social media companies of censoring the story to help Biden politically.

The Post story included a screenshot of what the paper said was a 2015 email from Burisma adviser Vadym Pozharskyi to Hunter Biden, thanking him for “the opportunity to meet your father.” But the email doesn’t indicate whether Pozharskyi was describing a meeting that had already occurred or one intended to occur in the future. Nevertheless, the Post reported that the existence of such a meeting undercut Biden’s long-held assertions that he had no involvement with his son’s business dealings.

Biden’s campaign would not rule out the possibility that the former VP had some kind of informal interaction with Pozharskyi, which wouldn’t appear on Biden’s official schedule. But they said any encounter would have been cursory. Pozharskyi did not respond to a request for comment.

And senior Biden advisers who spoke to POLITICO on Wednesday — including Michael Carpenter and Amos Hochstein, who staffed the vice president at the time — similarly said that while there was never an official meeting, it’s technically conceivable that Pozharskyi would have approached Biden on the sidelines of some broader U.S.-Ukraine event. But they emphasized that they have no indication that happened, and that they had never heard of Pozharskyi before.

“I’ve literally never heard of this guy in my life,” said Hochstein, a close Biden adviser who served as a special envoy for International Energy Affairs at the State Department during the Obama administration.

“This is a Russian disinformation operation,” said Carpenter, a former deputy assistant secretary of defense who specialized in Russia, Eurasia and the Balkans and now serves as managing director of the Penn Biden Center. “I’m very comfortable saying that.”

Burisma’s website lists at least some of Pozharskyi’s meetings with U.S. officials, including a meeting in November 2017 with then-ambassador Marie Yovanovitch and a series of meetings with members of Congress, though the company lists only Reps. Gus Bilirakis (R-Fla.) and Bobby Rush (D-Ill.) by name. It lists no meetings with Joe Biden. Pozharskyi also reportedly met in 2018 with Kurt Volker, who was then the Trump administration’s envoy to the peace talks between Russia and Ukraine.

And a schedule of meetings Pozharskyi held in the United States in March and April 2016, appended to a recent report issued by Sen. Ron Johnson (R-Wisc.), indicates he met with Hunter Biden, addressed a conference on the U.S.-Ukraine energy relationship and met with staff to three lawmakers: Sen. Rob Portman (R-Ohio), Sen. Jeanne Shaheen (D-N.H.) and Rep. Marcy Kaptur (D-Ohio). Pozharskyi’s visit coincided with a U.S. trip by then-Ukrainian President Petro Poroshenko, who met with Joe Biden during his visit.

The Post reported that the emails were initially discovered on a laptop and hard drive dropped off in April 2019 by the patron of a Delaware-based Mac repair shop. The repairman at the shop, according to the Post, copied that hard drive, shared it with an associate of Giuliani, GOP senators and the FBI.

A lawyer for Hunter Biden, George Mesires, did not respond to inquiries from POLITICO on Wednesday. Mesires told the Post that Giuliani “has been pushing widely discredited conspiracy theories about the Biden family, openly relying on actors tied to Russian intelligence.”

The story immediately presented social media companies with a practical application of the same thorny dilemma that has confounded them for the last four-plus years: how to handle unverified or false allegations that become weaponized in the political arena.

Unpacking the national conventions and the race for the White House.

Facebook’s head of security, Nathaniel Gleicher, warned last month that foreign adversaries could pursue hack-and-leak operations in which stolen and manipulated content is released to media outlets in order to sow chaos. He specifically warned in a Sept. 24 tweet they may “trick journalists into doing their amplification for them,” a sentiment he re-upped Wednesday morning.

Facebook has taken steps in recent years to prevent foreign actors from interfering in the U.S. election, including policies against fake accounts and requiring more transparency from political advertisers. The company has also recruited third parties to fact check news stories, which if found to be false would appear lower in people’s news feeds.

The company has separately begun appending labels to election-related content, such as posts about how to vote, and even demoting or removing posts found to violate its policies against misinformation. But critics have said those efforts do little to stop the spread of misinformation, which can often gain attention more quickly than companies can shut it down.

A Facebook spokesman tweeted Wednesday that the company would take steps to reduce the spread of the New York Post story.

“While I will intentionally not link to the New York Post, I want be clear that this story is eligible to be fact checked by Facebook’s third-party fact checking partners. In the meantime, we are reducing its distribution on our platform,” Facebook spokesman Andy Stone tweeted. He added that the company’s standard practice is to reduce distribution of disputed content pending fact-check review.

Twitter went a step further and blocked users from posting links to the New York Post article altogether on Wednesday, explaining to those who tried that the link “has been identified by Twitter or our partners as being potentially harmful.” For tweets posted earlier in the day, the company applied click-through warnings to the article, saying the page was “potentially spammy or unsafe.”

A Twitter spokesperson said the company took the action under its policies against hacked materials, but did not elaborate. The company also said it decided to limit the article’s spread because of a lack of authoritative reporting about the origins of the materials cited by the New York Post.

The action sparked instant backlash among Republicans, as well as staffers for the New York Post. “This is a Big Tech information coup. This is digital civil war,” tweeted New York Post op-ed editor Sohrab Ahmari.

President Donald Trump weighed in while en route to a scheduled campaign rally in Iowa, calling for the repeal of a provision in the 1996 Communications Decency Act that offers legal protections to internet and social media companies over how they manage content on their platforms.

“So terrible that Facebook and Twitter took down the story of ‘Smoking Gun‘ emails related to Sleepy Joe Biden and his son, Hunter, in the [New York Post],“ Trump wrote. “It is only the beginning for them. There is nothing worse than a corrupt politician. REPEAL SECTION 230!!!“

Sen. Josh Hawley of Missouri, a prominent GOP tech critic and Trump ally, wrote a letter to CEO Mark Zuckerberg accusing the company of “partiality” and lashed out at both social media platforms on Twitter.

“You almost get the idea #bigtech wants to buy this election,” Hawley tweeted.