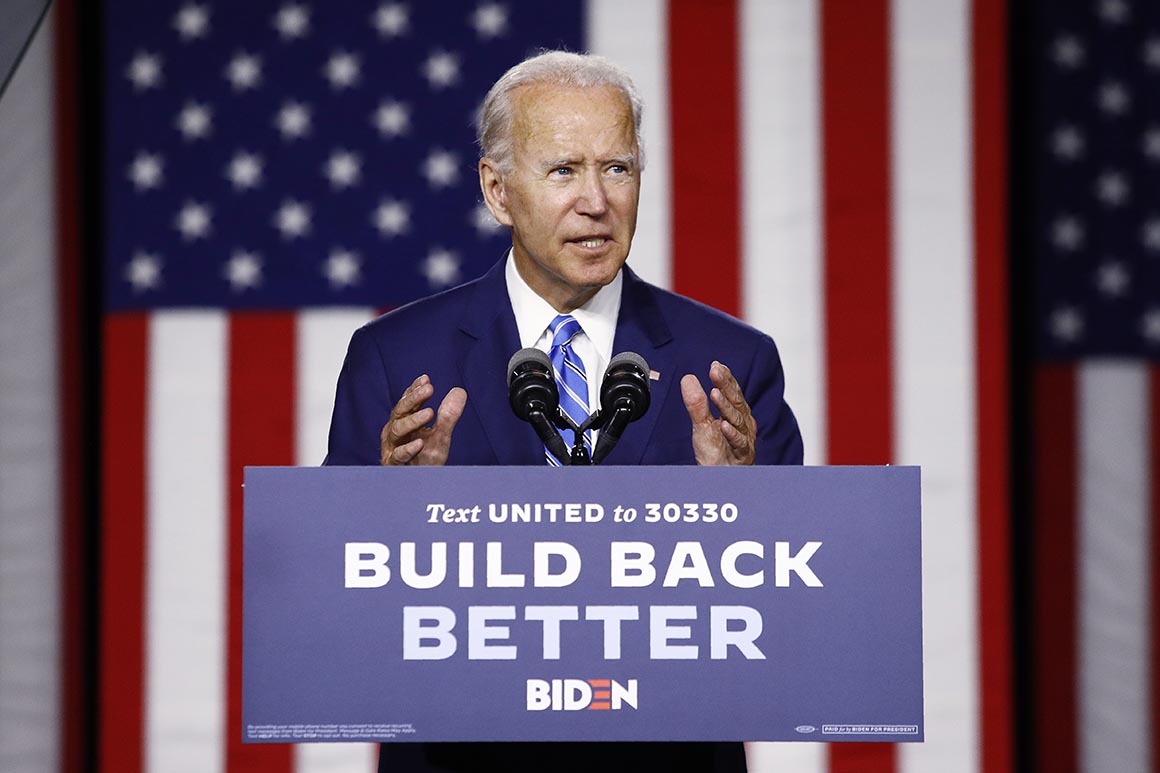 Throughout the second quarter, Biden and the DNC together raised in excess of $ 53 million from more than 200 donors who gave at least $ 100,000 apiece. The biggest donors among them, giving at least $ 500,000, included philanthropist Laurene Powell Jobs, financier George Soros, and Jeffrey Katzenberg, a Hollywood producer and founder of streaming platform Quibi. More than 370 people gave at least $ 50,000 — a list that includes billionaires, CEOs and top business leaders from New York to California.

Trump’s financial edge has been one of a few remaining advantages in a 2020 race that has turned sharply against him, and Biden’s erosion of that edge comes at a critical time in the election. Both campaigns are starting mega-millions TV ad campaigns in battleground states, and Biden is quickly scaling up his campaign staff to match Trump’s well-funded, professionalized operation.

Biden’s gushing fundraising spigot — a sudden change from the primary, when the former vice president typically lagged behind his Democratic rivals in cash — comes as he enjoys a consistent lead versus Trump in a slew of national polls, some showing him up by double-digits.

“As he goes from a 9-point lead to 10- to 11-point lead in national polls, even people who might not vote for him will give him money. It’s called a hedge,” said John Morgan, a Florida-based Biden fundraiser, noting that there’s a growing sense of “inevitability” around Biden among high-dollar givers.

Half of the donors who gave the maximum amount to Biden and the DNC hail from Silicon Valley, a hub of tech money that has favored Democratic candidates but viewed some 2020 presidential contenders warily during the primary, where stricter tech regulation was a hot topic.

“He’s keeping the pedal to the metal on fundraising,” said former Ambassador Tod Sedgwick, a Biden donor. “Surrogate events or events with the vice president or with Dr. [Jill] Biden — they’re happening almost every single day.”

Biden’s campaign has also touted its burgeoning small-dollar fundraising, a network that’s ballooned to include 3 million unique donors, after the campaign increased its presence with Facebook and Google ads. O’Malley Dillon wrote in a series of tweets that last month, 97 percent of the campaign’s fundraising “came from grassroots donors.”

But most notably, over the past two months, Biden was able to start raising money in tandem with the DNC after locking up the Democratic nomination, increasing the limits that high-dollar donors can give to the campaign and party to $ 620,600, according to Federal Election Commission filings. Some of that money is restricted for use on things like legal cases, recounts or convention planning. But all of it flows in some way into the 2020 Democratic machine.

Morgan noted that Greg Schultz, Biden’s former campaign manager who moved over to the DNC, is working to “help coordinate these big-dollar checks,” he said.

A number of super PACs also filed their monthly reports on Wednesday, bolstering the big-money Democratic armada preparing to face Trump in November.

Priorities USA Action, the main group backing Biden’s campaign, will not file its next financial report until Monday. But American Bridge, another anti-Trump super PAC, raised $ 18 million over the last quarter. A portion of the group’s funds, totaling $ 5.7 million, were channeled through a nonprofit, called the Sixteen Thirty Fund, which is not required to disclose its donors.

The Lincoln Project, an anti-Trump group run by Republicans, raised nearly $ 17 million last quarter, a leap over its previous totals. The group has become known for its edgy, viral videos that attack Trump, but they’re not yet a significant presence on TV. It spent just $ 2.75 million on TV ads, far short of other outside group spending.