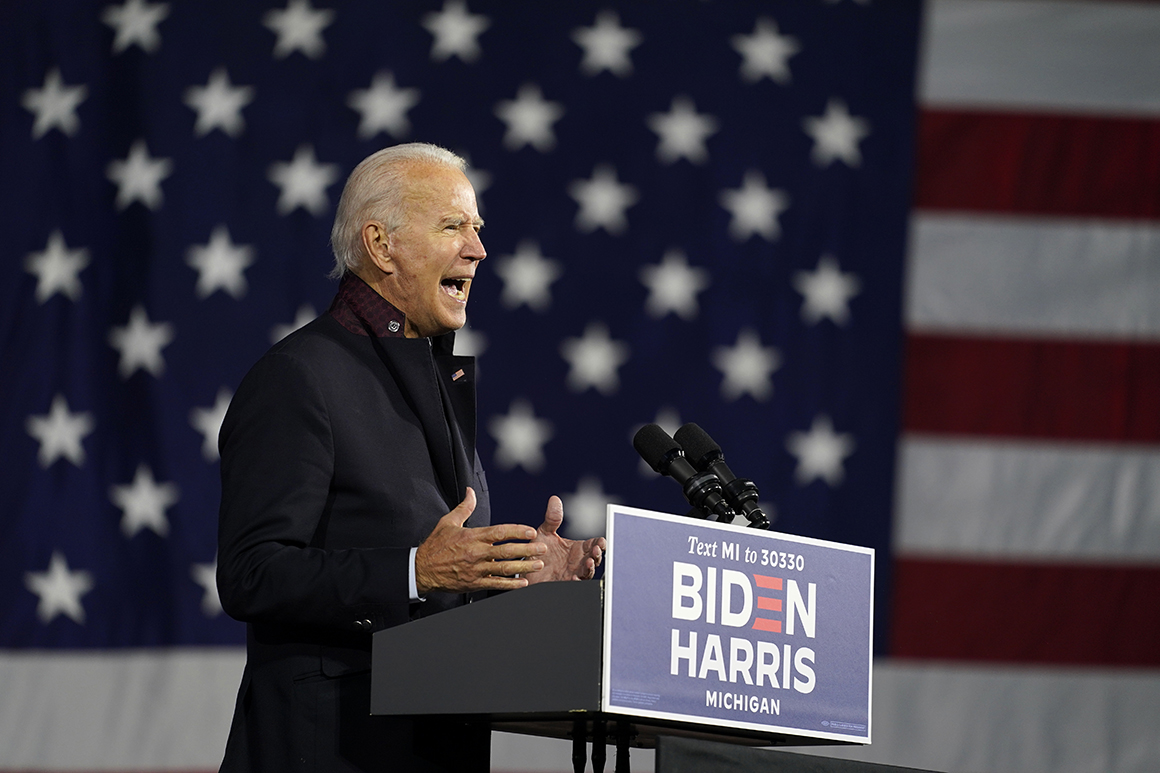 Nevertheless, one person close to the Biden transition said it remains “a priority to have options” from different parts of the ideological spectrum for the former vice president to consider.

That person and another official familiar with the transition deliberations confirmed to POLITICO that Biden staffers are analyzing some Republicans’ backgrounds and resumes as they compile shortlists of candidates for high-profile Cabinet positions. The goal is to have some GOP options among the finalists that Biden would choose from after the election.

Among the names being floated for possible Biden Cabinet posts are Meg Whitman, the CEO of Quibi and former CEO of eBay, and former Ohio Gov. John Kasich, both of whom spoke at August’s Democratic National Convention. Massachusetts GOP Gov. Charlie Baker and former Sen. Jeff Flake (R-Ariz.) have also been mentioned, as has former Rep. Charlie Dent (R-Penn.), who resigned from Congress in 2018 and became a lobbyist.

When asked for comment, a spokesperson for the Biden transition said only that the team is not making any personnel decisions before the Nov. 3 election, but stressed that “diversity of ideology and background is a core value of the transition.”

Nominating a Republican to the Cabinet would be the latest in a series of steps Biden has taken to extend an olive branch across the aisle. His campaign regularly holds calls with a group of officials who have endorsed him, including Republicans. After giving multiple GOP supporters prime speaking slots at his August convention, he tapped others for roles on his transition team, including Cindy McCain, the wife of the late Republican Sen. John McCain.

“This plays to Joe Biden’s comfort zone,” said one former Republican member of Congress who is close to the Biden transition. “If you’re Joe Biden, of course you’re going to want to expand your base a little bit, show some outreach to the other side.”

Tapping a GOP candidate to lead a federal agency could be an easy and early way to reward Republicans who endorsed him before the election and signal his intent to bridge the country’s partisan divide. But it could also alienate Democrats already worried whether a nominee who has long styled himself as a moderate will pursue progressive policies once in office.

“I don’t understand why someone who says, ‘I am the Democratic Party,’ would then hand benefits to someone who’s not a Democrat,” said Jeff Hauser, director of the the Revolving Door Project, a left-leaning advocacy group he founded in 2015 to scrutinize executive branch appointees.

Already, members of the Democratic left are making their opinions known. Left-wing lawmakers and progressive groups on Friday signed a letter saying no corporate executives or lobbyists should have Senate-confirmed positions in a Biden administration. And Segal and other progressive leaders say they and their supporters are ready to loudly oppose the nomination of anyone with a record they find objectionable — be they Republicans or Democrats.

“We need to have people in those positions who will rise to the occasion much like they did in the New Deal era,” said Larry Cohen, the president of the board of Bernie Sanders’ organizing group Our Revolution.

Despite their criticisms, progressives have collected a handful of wins on the Biden transition. Former officials note that it’s customary to vet potential candidates from across the aisle. And Biden allies say that for a nominee who will be looking to appoint the most diverse Cabinet in history, ideological diversity should be a part of those considerations.

Plus, for a Democratic presidential nominee who has won significant support from former elected Republican leaders, Biden has an even broader pool of GOP candidates to choose from than his predecessors, supporters say.

Some Cabinet positions have historically been considered less ideological than others, a “safe” slot to fill with a member of the opposite party. Both Obama and Bush appointed Transportation secretaries from the other party, for example. The Transportation Department, however, is expected to have a higher profile in a potential Biden administration that wants to focus on a major infrastructure package.

National security is another traditional spot for cross-party appointments. Clinton tapped Republican Bill Cohen to lead the Department of Defense, while Obama had two GOP officials in that role: Robert Gates and Chuck Hagel.

Gates was a holdover from the Bush administration, whom Obama kept on as a bipartisan gesture. But Gates didn’t always agree with the president’s decisions and offered harsh critiques of Obama and others in the Cabinet in a memoir he released after leaving the administration. Gates reserved some of his harshest criticism for Biden, saying the vice president had been “wrong on nearly every major foreign policy and national security issue over the past four decades.”

Gates’ comments and actions remain fresh on Biden aides’ minds as they consider the makeup of the Cabinet and whether tapping a Republican could later backfire.

Progressives, meanwhile, say it’s too big a risk to install a conservative in any agency in the current political environment.

“In addition to having more than a decade of corporatists running domestic policy to the detriment of everyday Americans, we also need to confront a generation of unhinged militarism and mass illegal unconstitutional surveillance,” Segal said. “There are relatively few people from either party who are likely to be great on those issues … But to the extent that there are those people, they’re in the Democratic party.”

Even some Republicans stumping for his election say including a Republican in the new administration may have a higher cost than benefit for Biden.

Tim Miller, who leads the group Republican Voters Against Trump, said his organization isn’t pushing for any GOP Cabinet pics, and that crossing the aisle for some nominations won’t matter much to the swing voters his group has been in contact with all year.

Progressives and public policy experts are also skeptical that appointing a Republican would win Biden any goodwill among rank-and-file GOP lawmakers, whose votes he may need to pass major pieces of his agenda.

As evidence, some point to congressional Republicans’ unwillingness to support Obama’s legislation and nominees. “To defeat Trump, we need the broadest possible coalition,” Cohen said. “But to govern the country, there’s no way we can go back to believing we’re going to get Republican votes — we spent eight years trying and failing on that front.”

Cohen added that there may be some Republicans more or less aligned with Biden on policy who could “do a great job” in some positions. “Including them is a nice gesture,” he said. “But it won’t help get anything passed on Capitol Hill.”

Still, people in Biden’s circle expect him to tap someone from the GOP for a Cabinet position.

“I have no doubt that someone is vetting options for him,” one transition adviser and longtime ally told POLITICO. “I would be surprised if that wasn’t something he was considering.”

The former vice president in late April said he would not have any limitations on tapping a Republican “if they’re the best-qualified person to do it.”

He also regularly invokes his ability to work with the GOP. At a town hall hosted by ABC News on Thursday, Biden said the first thing he will do if elected president will be to call Republican allies and say, “‘Let’s get together. We’ve got to figure out how we’re going to move forward here.’ Because there are so many things we really do agree on.”

Biden allies believe working across the aisle will make it possible to carry out a sweeping agenda on health care and the economy. But unlike his predecessors, Biden is now facing a Republican party that has “cleaved in two,” cautioned Matt Bennett, executive vice president of public affairs at the centrist think tank Third Way — those with and those against Trump.

That division, Bennett said, could make it harder than it once was to bring the parties together through something like a Cabinet position, raising the cost of the move while lowering the benefit.

“You get the downside of having someone in your Cabinet that’s not aligned with you ideologically and alienates the left, without getting the upside of bipartisanship,” Bennett said. “Does nominating a Never Trumper really bring people together?”