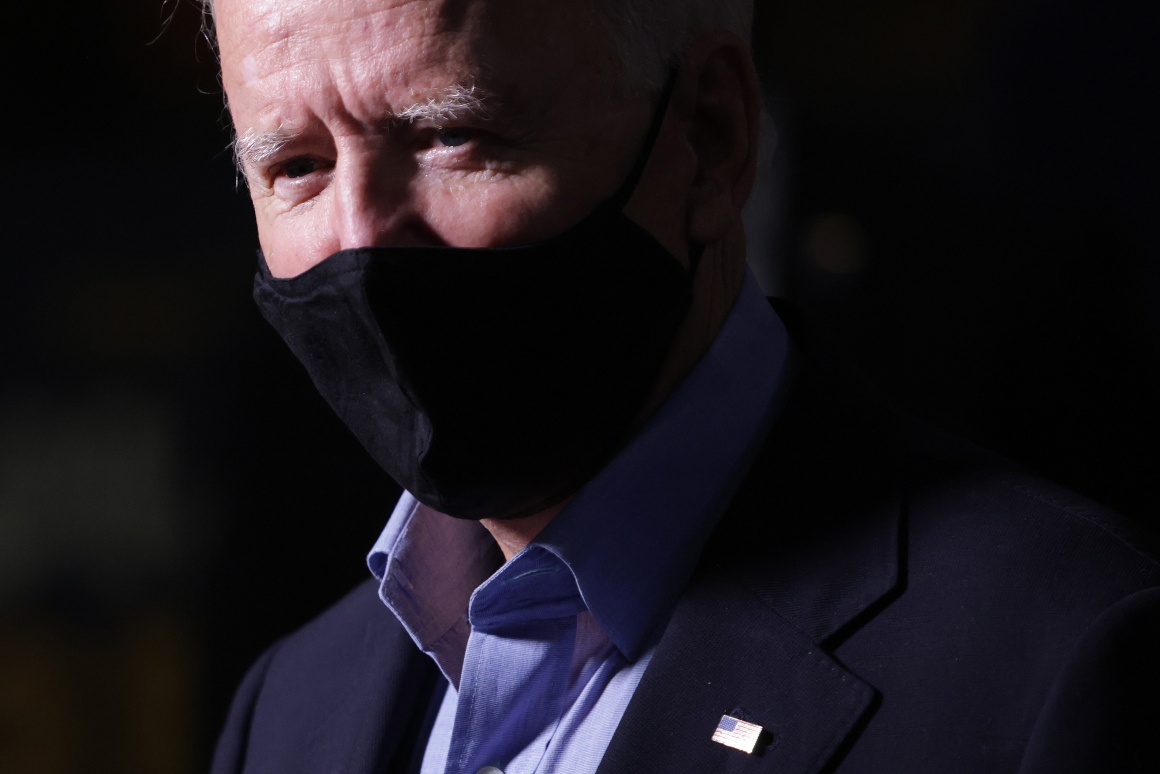 It’s an abrupt turnaround from the Biden campaign’s previous posture. Over the past two months, the campaign and the Democratic National Committee have insisted that their voter turnout operation focused on digital organizing, phone banking and texting was superior to President Donald Trump’s even without canvassing. Meanwhile, Democrats used door-knocking as a public health cudgel to bash Republicans as irresponsible.

The senior spokesperson for the DNC’s “War Room,” Lily Adams, said in August, “The Trump campaign is risking the lives of their staff, the lives of voters, and risking becoming a super spreader organization during the middle of a pandemic.”

The Biden campaign emphasized that it was starting its canvassing operations with a host of safety measures such as free personal protective equipment, temperature checks, and training sessions. It’s not clear, however, why those precautions couldn’t have been taken months ago.

“We’re now expanding on our strategy in a targeted way that puts the safety of communities first and foremost and helps us mobilize voters who are harder to reach by phone now that we’re in the final stretch and now that Americans are fully dialed-in and ready to make their voices heard,” Biden campaign manager Jen O’Malley Dillon said in a statement.

The Biden campaign told POLITICO that, despite its public statements to the contrary, the campaign has been piloting and building out a strategy to engage voters in-person since the August convention.

Last month, O’Malley Dillon said that the campaign didn’t need to knock on doors to reach voters. “I know the Republicans want to say ‘We have a million door knocks a week.’ Well, that doesn’t really matter,” she said.

But that calculus has apparently changed closer to Election Day.

Internal polls from progressive groups show the race tightening in Pennsylvania, contrary to what public polls have indicated, according to two Democrats with knowledge of the numbers. The Trump campaign says it has knocked on 1.5 million doors in the key swing state since June, while the Biden campaign has knocked on zero.

And in multiple battleground states across the country, other Democratic candidates broke with Biden weeks ago and resumed in-person canvassing.

The Biden campaign’s shift comes as a relief to many Democrats who have spent months pressuring the campaign to start door-to-door campaigning, because they feared the party was unilaterally disarming against the Trump campaign.

“I think it’s the absolutely right call,” said John Fetterman, the Democratic lieutenant governor of Pennsylvania, who said he had told the Biden campaign he believed that they should resume door knocking. “There are many counties with a small handful of cases where it can be done safely.”

Jim Wertz, chair of the Erie County Democratic Party in Pennsylvania, also applauded the news. Eager to avoid a repeat of 2016, when the county flipped to support Trump after twice backing former President Barack Obama, the local Democrats hired their own field director and, in June, began dropping off literature and having “soft” conversations with voters in person.

“The more people we have walking, the better,” Wertz said.

The late efforts could be especially helpful for reminding voters to return absentee ballots, with a record number of Democratic voters are expected to vote by mail.

The Republican National Committee ripped the Biden campaign for their reversal and mocked its effort to start canvassing so late.

“We have been safely knocking doors for months, and Democrats sanctimoniously called us ‘super spreaders’ for it,” said RNC spokesperson Michael Ahrens. “They are getting trounced on the ground and they know it, but you cannot build an effective ground game in a matter of weeks.”

The RNC claimed that it and the Trump campaign are knocking on 2 million doors a week and have hit 19 million doors since they resumed canvassing in mid-June.

Those efforts appear to have paid off in at least one key way: Republicans have been outmatching Democrats in voter registration amidst the pandemic. Since June, the GOP has made a net gain of 135,619 voters in Pennsylvania, while Democrats added just 57,985, election analyst David Wasserman reported Thursday.

Even if Republicans are inflating their door-knocking count, as some Democrats insist, it is effectively impossible for Biden’s campaign to match Trump’s door-knocking numbers before Election Day. Some Democrats fear that it will be impossible to stand up even an effective ground game with just a month to go. In 2012, Obama’s reelection campaign began placing field organizers in swing states in April 2011 — 18 months before the election.

“I think it’s too little too late,” a Democratic strategist who works with major donors said Thursday. “If it’s true that Trump is knocking a million [doors] a week and we are doing zero, that’s criminal negligence on the Democrats’ part.”

Claire Sandberg, Bernie Sanders’ 2020 national organizing director, said it is “definitely” possible to get a field program off the ground in 33 days. But she cautioned that the Biden campaign could face challenges.

“I think the critical question is whether they have enough staff dispersed across those states to handle all of the potential volunteers and reach all of the people on the doors who are in their target voter universes,” Sandberg said. “I’m relieved that they’re doing this. Look, phone calls and texts and relational organizing are all effective. But no tactic reaches everyone, and there are some people who you’re only going to reach if you knock on their door.”

The Biden campaign and Democratic Party have been defensive about their doors-don’t-matter approach for months, even as they dismissed concerns as “bedwetting.”

Democrats appear to have scrambled to prepare the operation over the past several days. Earlier this week, a canvassing company placed ads online saying it was “urgently hiring” for “social distancing door to door canvassers” in Michigan for the Democratic Party’s coordinated field campaign. The ad said the firm was hiring in Flint, Detroit, Lansing and Grand Rapids.

A Democratic strategist working in Michigan described the door-to-door campaign as “a huge change that local volunteers have been clamoring for.” Field organizers in Pennsylvania began emailing volunteers about the change on Thursday. In one email obtained by POLITICO, the organizer highlighted that “we will be adding some socially distant in-person volunteer opportunities, including lit-drops, careful door knocking, and voter educators for the final 33 days.”