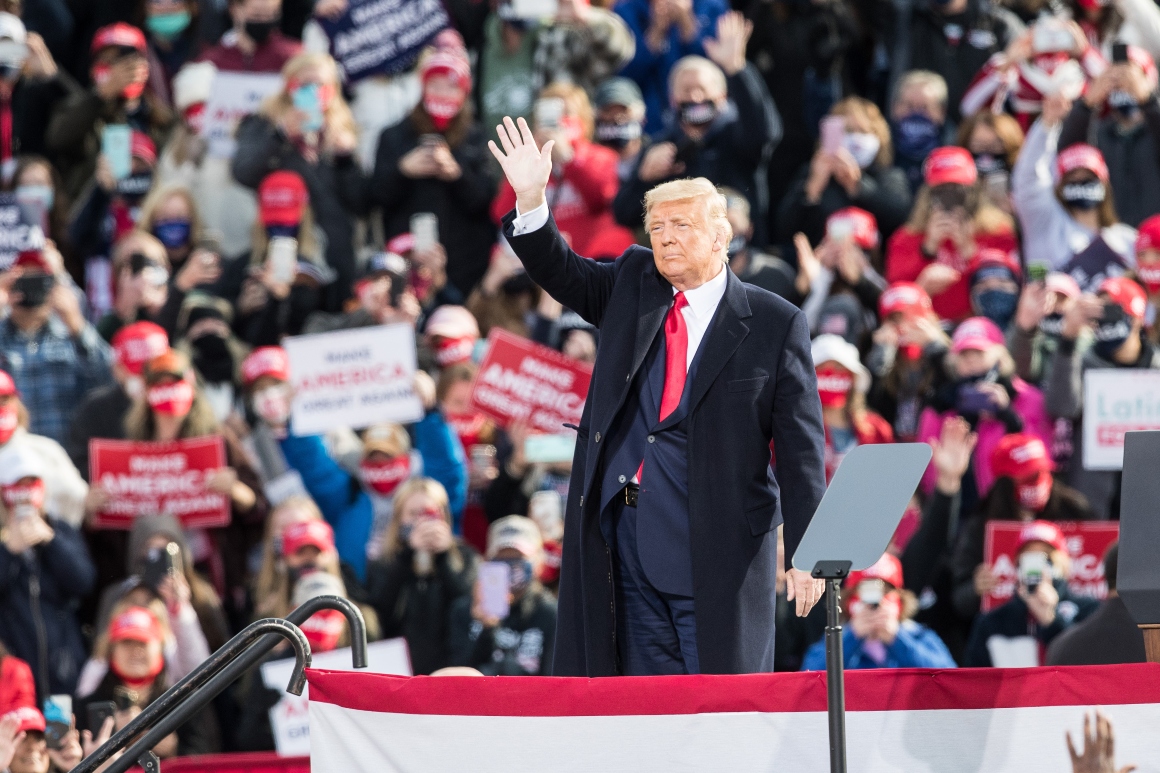 Trump’s frenetic campaigning is occurring as the fates continue to defy his reelection campaign. Weeks after the president’s own hospitalization for Covid-19, Vice President Mike Pence’s chief of staff, Marc Short, tested positive on Saturday for the coronavirus amid spiking cases nationwide, even as Trump continued to downplay the pandemic. And what would normally be a signature achievement for an incumbent president, the imminent confirmation of Amy Coney Barrett to the United States Supreme Court was largely lost in the noise.

The heightened focus on the coronavirus comes at the worst possible time for Trump, providing a fresh hook for Biden to continue lacerating the Republican president for his handling of the coronavirus and the economy.

Some experts say Latinos will be the second largest voting group in this year’s election. But the group’s ethnical and cultural diversity makes it a particularly difficult one for the political world to understand, and an extremely difficult one for both parties to appeal to.

Incumbent presidents have only been denied reelection two times in the post-World War II era — the last to lose was George H.W. Bush in 1992. But as Trump enters the final week down 8 percentage points nationally — and vulnerable not only in traditional swing states, but in conservative strongholds such as Texas — he is stumping with the fierce desperation of a challenger. There were five appearances in five different states across two time zones over the weekend; he’s back out again to a sixth state on Monday morning, this time to Pennsylvania.

On Tuesday, Trump will appear in Wisconsin and Michigan — but also in Omaha, competing for a single Electoral College vote in Nebraska’s 2nd Congressional District. The next day it’s Arizona and Nevada.

With Trump at risk on so many varied fronts, there is no single, obvious place for him to go to stanch the bleeding. Instead, he is seeking to prop up his base in as many states as possible, while Republicans hope unfavorable polls and turnout models are off, just as in 2016.

Trump’s campaign said he will focus intently in the final days of the campaign on the Rust Belt states of Wisconsin, Pennsylvania and Michigan, where in-person voting on Election Day is expected to be especially heavy.

Biden is stumping at a more measured pace. His weekend featured just two events in one swing state. On Tuesday, he’ll visit Georgia — a red state Trump is at risk of losing — a luxury play for a Democratic nominee, enabled by Biden’s solid positioning elsewhere.

Trump’s advisers maintain they are confident Republicans will turn out in heavy numbers on Election Day. The president himself continues to express unalloyed optimism about his chances. He derides Biden as a creature of Washington, often referring to his “47 years” of government experience. Yet as the current occupant of the White House — as opposed to the candidate who had never before held elected office, as in 2016 — he is laboring under the weight of incumbency.

Nick Trainer, the Trump campaign’s director of battleground strategy, said the distinction is not so much incumbent-challenger as, “It’s insider versus outsider. It’s someone who sat in the United States Senate for decades, and most of what he did there was not helpful for the American people, and as vice president, a lot of things that he’s now saying he would do were never considered.”

“They think they can run this race solely on COVID,” he said. “But I think as a general rule, voters want to vote for something, and not against something.”

But Trump’s messaging is far less focused and disciplined than a traditional incumbent’s would be in the closing days of a campaign — ranging from revived allegations against Biden’s son Hunter over his work for an overseas energy company, to Trump’s prosecution of the “fraudulent media” to his indictments against Barack Obama and “crooked” Hillary Clinton, two Democrats he isn’t running against.

Against that backdrop, many of Trump’s most potent policy positions from his tenure in office have been largely subordinated, such as immigration and trade.

Even if Trump could narrow his argument to a pure repudiation of Biden’s decades in government, there is little evidence it would work. Trump is in danger of losing the election precisely because it has been a referendum on his presidency, and Biden is not letting up in the final week. He is skewering Trump for his handling of the pandemic, which campaign aides say he will continue to emphasize in the closing days of the campaign.

On Friday, the United States hit a new single-day record of 83,010 new coronavirus cases. On Sunday, White House chief of staff Mark Meadows acknowledged “we’re not going to control the pandemic.” And as the final full week of the campaign opens, Trump cannot seem to escape that.

“Looking at Trump’s approval numbers, they are not moving,” said Hari Sevugan, a Democratic strategist who worked for Pete Buttigieg’s 2020 campaign and is an Obama veteran. “If you’re the incumbent and you’re 10 days out and you’ve failed that test, it is really hard to come back.”

In contrast, Sevugan said, “If [Biden] comports himself like a president, he’s doing the campaign work, he’s offering the strongest contrast he can … that is the thing that people want to see more than anything else, especially amongst independent voters, amongst undecided voters and amongst Democrats.”

Trump’s campaign is not without life. Republicans have cut significantly into Democrats’ early-vote lead in Florida. Democrats are still wary of a surge of late voting by rural, white voters in the upper Midwest, and Trump is drawing energetic crowds of supporters to his rallies, which could have at least a marginal impact on turnout. Though Biden is vastly out-raising Trump, his reelection effort announced it raised $ 26 million after last week’s final presidential debate, the Trump campaign’s largest digital fundraising day on record.

“He’s running, from an event standpoint, the same campaign” that he ran in 2016, said Bill McCoshen, a Republican strategist based in Madison, Wis. Trump has “a real shot to win the Electoral College,” McCoshen said, in part because Trump’s rallies help him to sign up new voters who did not participate in 2016 — and who can still vote on Election Day.

Even so, the challenges for Trump remain severe. Outside the underlying horserace data heading into the final week before Election Day, congressional district and even county-by-county polling data in battleground states suggest Trump continues to languish across key parts of Michigan, Pennsylvania and Iowa, a welcome sign for his detractors in the final days.

Trump’s numbers are down from 2016, even in places where he continues to lead Biden. And the rising number of coronavirus cases has served as a reminder of Trump’s uneven approach to the pandemic, undercutting his late assurances that the nation has rounded the corner on the virus. Hinting at the prospect of a post-Trump reality in Wilmington, Del., Biden said he will talk with state and local leaders during a prospective transition period to develop a coronavirus relief bill that he could sign by the end of January, just days after he would take office.

Mike Madrid, a Republican strategist and Trump critic who has been focused on peeling away a sliver of Trump’s GOP support through his work with the Lincoln Project, said it’s already too late for any last-minute developments that could shift momentum in Trump’s favor.

“All of his base is going to show up on Election Day, so whatever October surprise or whatever money he’s got, he needed to spend yesterday,” Madrid said in response to late ad-buying by the Trump campaign as it pushes back into states like Minnesota. “He’s got a bigger time problem than a money problem and he’s got a huge money problem. It’s time. He’s running out of time.”