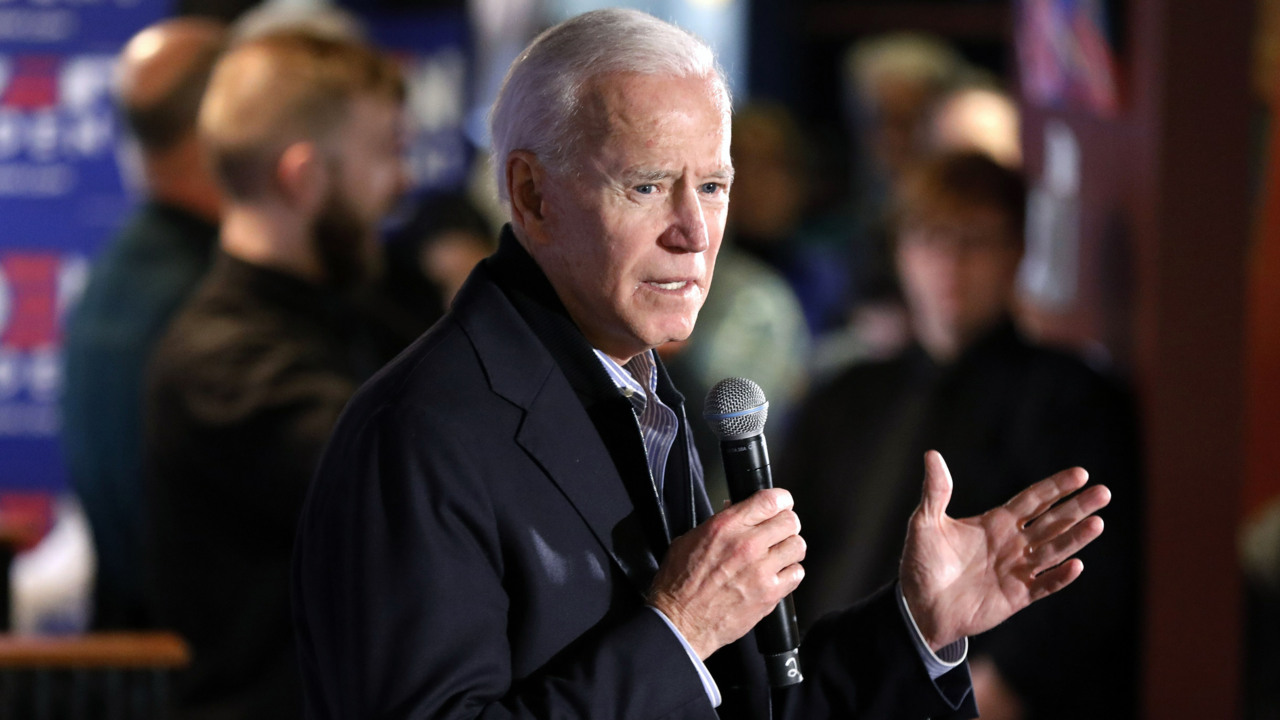 Presidential contender Joe Biden jokingly called a college student in New Hampshire a “lying, dog-faced pony soldier” during a campaign event on Sunday, just two months after he unloaded on an Iowa voter whom he called a “damn liar” and days after he dryly instructed a climate activist to “go vote for someone else.”

The student, Madison, of Mercer University in Georgia, began by asking Biden how he could remain competitive in the race after that performance.

“It’s a good question,” Biden responded. “Number one: Iowa’s a democratic caucus. You ever been to a caucus? No you haven’t. You’re a lying, dog-faced pony soldier. You said you were; but now you got to be honest. I’m gonna be honest with you. It was a little bit confusing in Iowa.”

Biden had used the bizarre phrase in January as well, in response to a question about President Obama’s broken promise that individuals would be guaranteed the option to keep their doctors under the Affordable Care Act.

Contrary to Biden’s previous suggestions that the line was from a John Wayne movie, TMZ reported that the phrase may have come from the 1952 Tyrone Power film called “Pony Soldier.”

Nevertheless, the moment drew mockery from conservatives and other commentators.

“If he can’t handle a simple question from one of his own supporters, how can Joe Biden possibly take on Donald Trump one on one for six months?” asked Donald Trump, Jr., on Twitter.

George Washington University law professor and GOP impeachment witness Jonathan Turley added: “Hmmm, Biden does not appear to be confining his ‘go negative’ strategy to [Pete] Buttigieg, but seems to think it will work with voters. Calling a voter ‘a lying dog-faced pony soldier’ must be a new voter suppression strategy by targeting your own voters.”

Also in New Hampshire, Biden forcefully echoed failed presidential contender Eric Swalwell in dismissing Second Amendment advocates, claiming personal gun ownership is an ineffective defense against government tyranny. (In an infamous tweet, Swalwell informed a gun-rights proponent that the government “has nukes” and could defeat an uprising in a “short war.”)

“Those who say ‘the tree of liberty is watered with the blood of patriots’ — a great line, well, guess what: The fact is, if you’re going to take on the government you need an F-15 with Hellfire Missiles,” Biden said. “There is no way an AK-47 is going to take care of you, if you’re worried about the government coming and knocking down your door.”

Biden’s defensiveness on the campaign trail has raised questions about his possible electability issues, especially given President Trump’s propensity for hammering the Bidens’ perceived corruption. This past December in Iowa, Biden slammed a voter who questioned Hunter Biden’s business dealings as a “damn liar” who needed to take an “IQ test.”

The former vice president then seemingly called the man “fat” after deriding him for his self-professed sedentary lifestyle, although the Biden campaign said there was a misunderstanding.

Biden has stepped up his aggressiveness in recent days, although his attacks have been increasingly directed not just at individual voters, but also other rivals for the White House.

“This guy’s not a Barack Obama. Barack Obama had been a United States senator of a really large state,” Biden said this weekend, referring to Buttigieg. “This is a very different situation.”

Biden spoke with reporters hours after his campaign went up with a new digital ad suggesting the 38-year old candidate — who’s nearly four decades younger than Biden — didn’t have enough experience to be president.

The spot used a clip of then-President Obama calling Biden “the best vice president America’s ever had,” before going on to compare arguable successes of the Obama administration with mundane mayoral actions by Buttigieg, such as installing “decorative lights under bridges.”

Buttigieg’s team, in response, argued: “Vice President’s decision to run this ad speaks more to where he currently stands in this race than it does about Pete’s perspective as a mayor and veteran.”

Asked about his campaign’s digital video, Biden explained: “What I’m doing is responding to what Pete’s been saying for the last two months, that all the problems we have today are from the recent past.”

“When you get attacked, you have to respond. I kept my mouth shut for a long time. I haven’t responded at all. But it’s been constant, a constant assertion that the problems we’re facing today are somehow because of our administration. That’s simply not true,” Biden said.