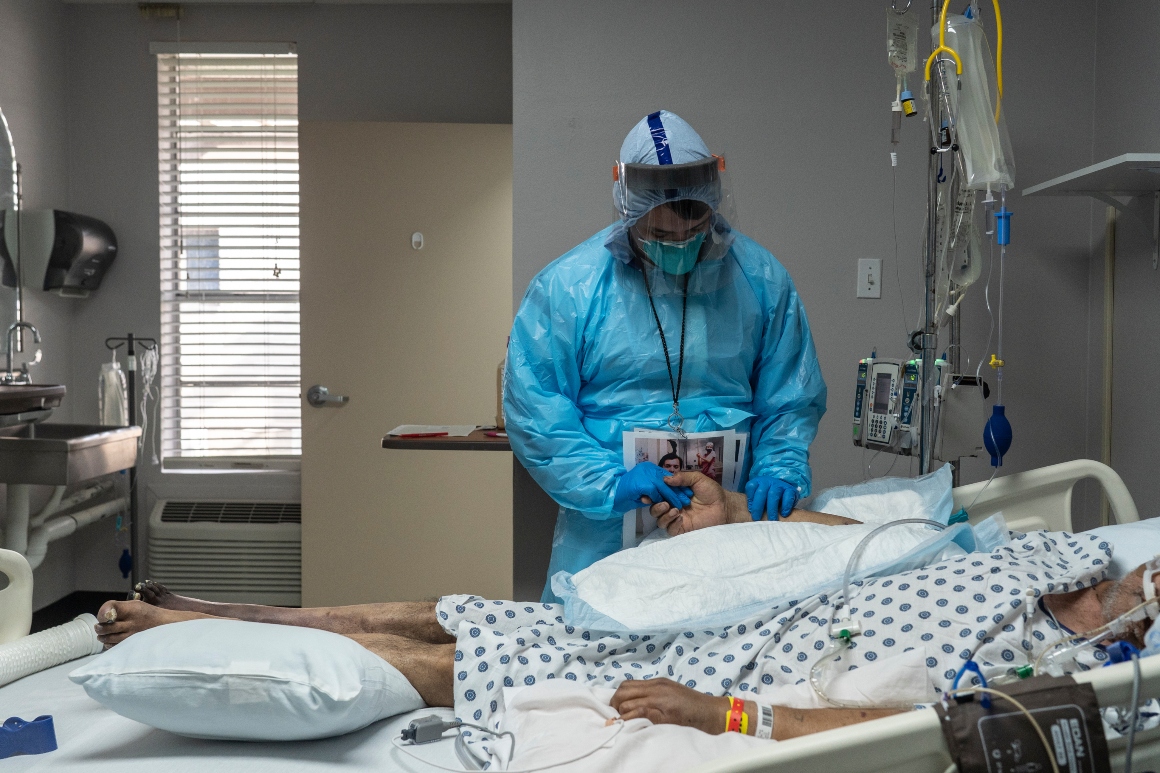 It’s a split-screen response: Trump is virtually silent on the pandemic, while Biden is preparing to take office during the outbreak’s darkest period. POLITICO’s Dan Diamond breaks down how the teams are coordinating — and not — as the transition approaches.

Backers of the legislation think linking health worker shortages with immigration policy will resonate with the incoming administration as Covid deaths and hospitalizations mount. Efforts to expand immigration for health workers have been caught up in a broader, fractious immigration debate for most of the Trump years.

A spokesperson for the Biden transition linked the issue to the incoming administration’s plans for a broader overhaul of immigration policy for highly skilled workers.

“President-elect Joe Biden will work to ensure our economy capitalizes on the talent of highly trained foreign workers, while also ensuring we are tackling domestic unemployment. This means working with Congress to increase the cap on employment-based visas in a way that protects American workers while supporting our economic competitiveness,” said Biden spokesperson Jennifer Molina.

The Trump administration largely rebuffed the groups’ repeated requests on health workers, though the federal health department made some accommodations, like giving doctors on visas expanded use of telemedicine. There is still a remote chance further changes could be wrapped into a pandemic relief package before the end of the year.

On Tuesday, a federal judge struck down the Trump administration’s latest effort to limit high-skilled immigration. But advocates say plenty of barriers remain.

Concerns about having enough doctors and nurses to handle surging Covid caseloads have intensified over the past month, with some major hospitals again shutting down all elective procedures to free up staff. Unlike in the spring, the prevalence of the virus means there are fewer U.S. health care workers traveling to hot spots.

Much of the recent lobbying around surging foreign health workers has revolved around the Healthcare Workforce Resiliency Act, S. 3599 (116), a bill that would “recapture” thousands of unused green cards Congress authorized in previous years and reallocate them, with 25,000 reserved for nurses and 15,000 for physicians.

But despite broad support from both sides of the aisle — including lead sponsor Sen. David Perdue (R-Ga.), whose runoff election in December could determine control of the Senate — the bill has been stalled since May.

Advocates of expanded immigration and health interests expect the measure will have stronger support from the Biden White House.

“I think it has a chance of passing even if Republicans keep control of the Senate, without Trump pushing on this issue,” said Greg Siskind, a prominent immigration lawyer who specializes in health care employment. “I don’t think it’s a natural thing for Republicans to be anti-immigration. They’ve always been willing to reach bipartisan solutions, it’s only been the last four years that’s changed.”

But skeptics give it long odds in a narrowly divided Congress that’s been reluctant to rewrite immigration laws. “It’s hard to get anything passed in Congress,” said Chris Musillo, an employment immigration lawyer who specializes in cases involving nurses. “Is the president a part of that? Perhaps, but I wouldn’t lay all the blame at his feet.”

Many of the bill’s green cards would go to physicians currently on H-1B visas already practicing in the U.S., giving them permanent resident status. Under the terms of their current visas, these physicians effectively cannot volunteer at other facilities due to work-site restrictions and face the possibility of deportation if they get sick and are unable to continue performing their job duties.

“We literally hold our breath whenever there is slight news that there might be another Covid relief bill,” said a physician working in Wisconsin on an H1-B visa, who responded to a POLITICO call out and requested anonymity to speak candidly. “But everybody would agree that it’s more likely to happen with a Biden administration.”

“Even though I want to help out, because of the visa hurdles and restrictions I’m not able to,” said another physician in Kansas with an H-1B visa, who likewise requested anonymity. “It’s frustrating because we’re willing to help wherever there is a shortage but our hands are tied.”

Other green cards would go to foreign workers overseas — mostly nurses, the most in-demand position at hospitals facing shortages — who are hoping to emigrate to the United States.

Even if the bill does not pass, advocates say the Biden administration could take action to help thousands of foreign-trained nurses who are stuck overseas.

Approximately 15,000 are already qualified and connected with a U.S. employer, but can’t complete the final steps of the process due to consulate closures and understaffing amid the pandemic.

“We’re dealing with the reality that U.S. embassies in many parts of the world have been closed down for extended periods of time. Where they have continued to operate, they operate on a skeletal staff basis,” said Ron Hoppe, CEO of WorldWide HealthStaff Solutions, a company that matches immigrant health workers with U.S. employers.

Immigration proponents say the new administration could address the issue by boosting consulate staffing and putting more priority on health worker approvals. Biden also potentially could use a power called “parole authority” to let these workers enter the U.S. and finish their final processing domestically.

A State Department spokesperson said the agency began reopening embassies and consulates in July, but that staffing and opening decisions were being made on a post-by-post basis.

Advocates are also preparing lists of executive actions that the Biden administration could take to cut red tape for health workers already in the U.S. on temporary work visas.

Ian Wagreich, an employment immigration lawyer, is leading efforts to present the Biden transition team a list of potential executive actions on behalf of the International Medical Graduate Taskforce, a professional group for foreign-trained doctors.

A summary of proposals under consideration that was shared with POLITICO includes expedited employment authorizations for health workers and their families and a suspension of work-site restrictions for workers with H1-B visas.