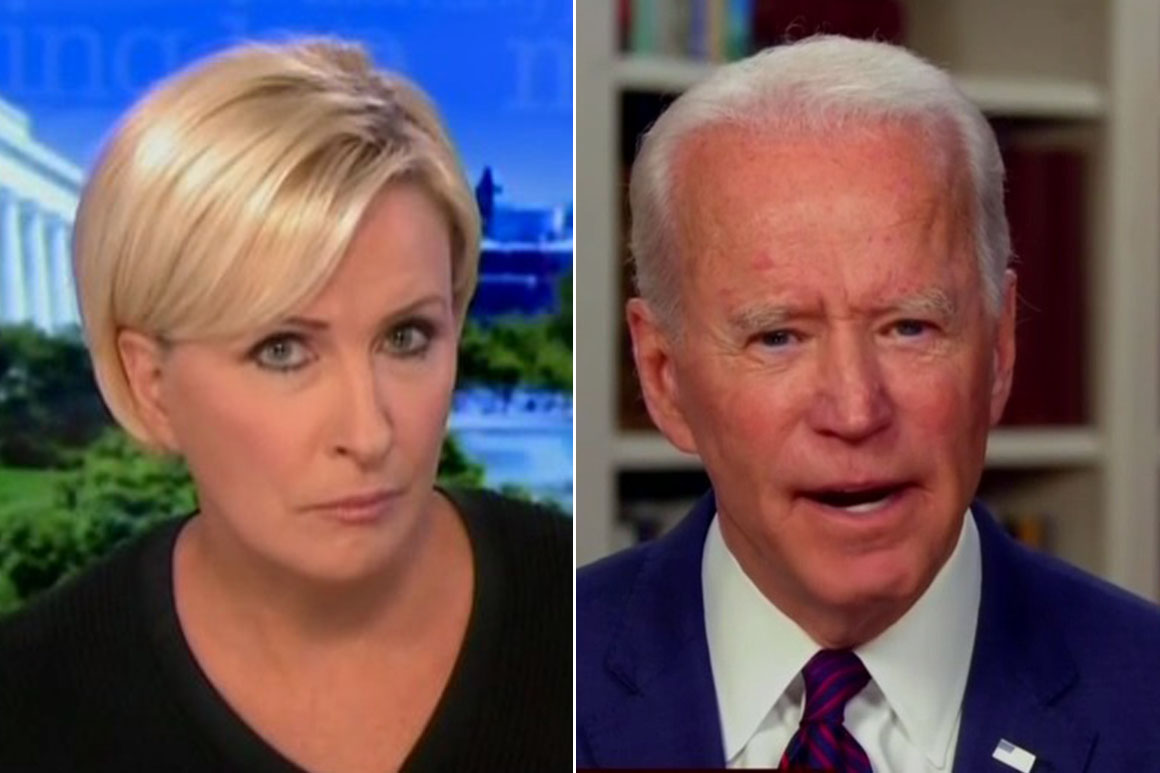 After days of internal discussions about how to address Tara Reade’s accusations of sexual assault, Joe Biden’s campaign on Friday finally put him on TV.

It was a carefully orchestrated exercise in damage control, not exactly flawlessly executed by Biden but accompanied by the kind of airtight denial that his increasingly restless party needed to hear.

“No. It is not true. I’m saying unequivocally it never, never happened, and it didn’t,” Biden said during nearly 20 minutes of exacting questioning from Mika Brzezinski on MSNBC.

It was Biden’s first general election test of an approach to crisis management that carried the former vice president through the Democratic primary — what one Democratic strategist called “a very old-school, very non-Twitter age technique.”

Where President Donald Trump erupts in a crisis — churning through news cycles in the seconds it takes him to compose a tweet — Biden is tortoise-like in emergencies that his advisers often view as less real than perceived on social media and in the press.

Before Friday, Biden’s campaign had merely issued a statement denying Reade’s accusation. Biden himself had said nothing about the allegations in more than a month since Reade accused him of assaulting her in a hallway when she worked for the then-senator in 1993.

For other Democratic officeholders, however, the situation was becoming increasingly untenable. Vice presidential prospects and members of Congress alike were being called to account for defending Biden — or staying silent — despite sharply criticizing Supreme Court Justice Brett Kavanaugh in 2018 for his treatment of women.

The emergence of new evidence in recent weeks only racheted up pressure on the campaign to more fully address Reade’s allegation. Some allies had privately encouraged Biden’s staff to have the candidate respond directly, according to one Democrat familiar with the outreach.

If the former vice president had expected softballs on the Democratic-friendly ground of MSNBC, Brzezinski did not oblige, questioning him about everything from his archives to non-disclosure agreements (Biden said he has never asked anyone to sign an NDA) to whether accusers shouldn’t be believed.

Biden’s performance on Friday is unlikely to put the issue to rest entirely. Reade has claimed that she filed a complaint against him in 1993 in the Senate, but has failed to produce any documentation. Biden — confident that no record of a complaint filed by Reade exists — called for a search of the National Archives.

But he was resistant to a search of his records at the University of Delaware. Biden refused to commit to asking the university to release his documents or even to conduct a search of those documents for Reade’s name or complaint.

Asked whether he would be in favor of making public “any” complaint filed against him throughout his Senate career, Biden responded that “I’m prepared to do that,” adding again that to “the best of my knowledge” there was not one complaint made against him in his nearly 40-year career in the chamber.

The University of Delaware records, he said, do not contain personnel files. Biden invited viewers to imagine what else they might contain when he volunteered that records of speeches and past positions he took could be “taken out of context” and become “fodder in a campaign.”

For the purposes of the sexual assault allegation, however, Biden’s refutation was significant for Democrats, giving Biden’s donors and surrogates something more than a statement from Biden’s staff to point to when they are asked to defend him.

Christine Pelosi, daughter of Speaker Nancy Pelosi and the chair of the California Democratic Party Women’s Caucus, said Friday that she still wished for a confidential, independent investigation into charges such as Reade’s.

However, she said, “The powerful statement and TV interview by Joe Biden forcefully defending his record on survivors’ rights to tell their stories, denying Reade’s charges, standing by his staff who denied a complaint was filed, calling on National Archives to release any relevant Senate record to the press, and refusing to attack his accuser demonstrate public accountability in action.”

Tracy Sefl, a former Hillary Clinton adviser, said Biden set “the right tone and the right message, and most importantly, the encouraging truth.”

Even if the allegation fails to gain traction, it is likely to complicate Democrats’ ability to criticize Trump for his own conduct with women. The president, who has been accused of sexual assault and misconduct by multiple women, appears to recognize as much.

Biden struggled Friday to differentiate his denial from his insistence during the Kavanaugh hearings that women accusing powerful men of misconduct should be believed.

Biden was challenged repeatedly on how he would square his unwavering stance at the time, that in cases in which women come forward with allegations of sexual misconduct, “you’ve got to start off with the presumption that at least the essence of what she’s talking about is real.”

“Look, from the very beginning, I’ve said believing women means taking women’s claims seriously when she steps forward and then vet it. Look into it. That’s true in this case as well,” he said Friday, adding that he believes women should be heard but also that the press should “rigorously” investigate the accusations being made.

Just before his “Morning Joe” appearance, Biden released a 1,000-word-plus statement in which he pointed to his work authoring the Violence Against Women Act and his vocal campaign to shed light on dating violence and campus sexual assault while serving as Barack Obama’s vice president.

He said Friday he has fought “my entire life” to change the culture on sexual assault, a line of argument that Biden foreshadowed earlier this week, when he discussed domestic violence during a livestream even with Hillary Clinton. Referencing his work on VAWA, Biden called ending violence against women “one of the leading causes of my life.”

In his statement, and in his “Morning Joe” interview, the former vice president pointed out that Reade has changed her story over time.

Marc Caputo contributed to this report.