Biden’s pandemic challenge: A unified plan for a divided country 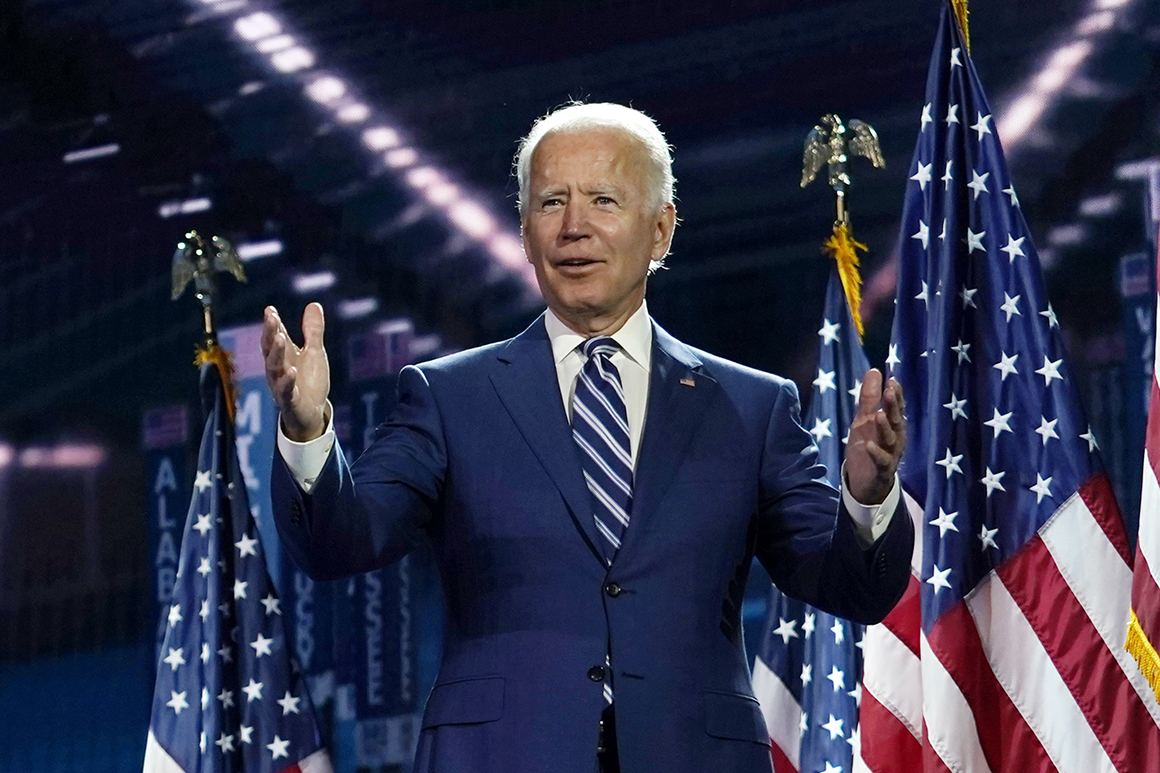 So far, Biden has called on governors to require masks rather than saying he would impose a national rule. He’s also pleaded with the public to think of masking up as a patriotic act. But some worry that leaning on persuasion is risky as well.

“What worries me is not whether Democrats who are already wearing masks will keep wearing masks because Biden tells them to,” said Chris Meekins, former deputy assistant secretary of Health and Human Services for preparedness and response, who served under Obama and for part of the Trump administration. “My concern is how do you get the people that aren’t — and if you think they’re going to listen to a President Biden who just defeated their guy, that’s just not going to happen.”

Biden’s team is thinking about how to counter this inevitable resistance.

“It’s going to be hard, I think, because the public trust is so much less than it used to be, which is unfortunate,” said Ezekiel Emanuel, a bioethicist and health policy expert advising Biden. “But part of leadership is to educate the public on why we’re doing what we’re doing and to get them behind you.”

How well Biden seizes control of the virus, and whether he can pull the country together, may both define a Biden presidency and dictate whether he can also make progress on his other campaign pledges, like clean energy, expanding affordable health insurance, and rebuilding the damaged economy.

“He knows he’s going to have to move aggressively on multiple fronts in parallel,” Murthy said in an interview. “He understands … that you don’t get to a better economic picture without implementing an effective public health solution.”

Murthy and Emanuel are both part of the deep bench of advisers that Biden began pulling together early this year, when the virus was surging in China but not yet visibly spreading across the globe. Others include Obama administration Ebola czar Ron Klain, global health expert Rebecca Katz, former HHS Assistant Secretary for Preparedness and Response Nicole Lurie, former FDA Commissioner David Kessler and former HHS Secretary Kathleen Sebelius. Many worked with Biden before on both public health threats like the H1N1 flu in 2009, as well as on the Affordable Care Act.

Since March, the group has briefed Biden at least four times a week on the virus’ spread and what has worked, or fallen short, in the states. It’s been the backbone of his public health planning, helping the campaign churn out plans to double the number of federally run drive-through testing sites, invoke the Defense Production Act to make swabs and reagents to alleviate testing bottlenecks, hire at least 100,000 contact tracers, and deploy twice as many OSHA investigators to enforce Covid safety measures in workplaces.

But as early state reopenings and a hands-off federal government allowed the outbreak to intensify over the summer — overwhelming hospitals, upending plans to bring children back to school and kneecapping the already bruised economy — Biden and his team decided they had to do more, especially for marginalized groups hit the hardest.

As more data emerged that Black and brown Americans were getting sick and dying at disproportionate rates, Biden put out plans and statements on strengthening the social safety net and implementing more protections for essential workers and communities of color — groups that often overlap.

As the death toll climbed in nursing homes, the campaign in July outlined how it would overhaul Medicaid to allow more long-term care at home.

Later in July, as the dilemma of reopening schools devolved into another partisan battle, Biden vowed if elected to give schools more detailed and uniform guidance on things like ventilation and safe classroom layout, along with the resources to carry it out. He also promised universal broadband so kids can stay connected remotely, and pledged to double the ranks of school counselors and psychologists to address the mental health crisis that has accompanied Covid-19.

And since a pandemic, by definition, is a global problem, Biden has promised a global response. He has vowed in his speeches to restore ties to the World Health Organization that Trump aims to sever, and revive the global health directorate at the National Security Council that the Trump administration disbanded in 2018.

A shot in the arm

Should a viable vaccine emerge before January — either from the Trump’s administration’s “Warp Speed” project or another country or private company — that will make Biden’s job easier, but not easy. The campaign is already thinking through how to manage a mass vaccination campaign, pledging to invest $ 25 billion to manufacture and distribute it, and launch a national campaign to persuade skeptics to take it.

Biden’s team cautions that it’s impossible to know when a vaccine may be ready or how effective it may be, but campaign officials said it would be fully covered with no out-of-pocket costs under Obamacare’s rules and free to the uninsured under his administration.

Emanuel, who has briefed the Biden campaign on a vaccine distribution strategy he created this summer with the Center for American Progress, said the team knows they need to prepare for multiple scenarios.

“What if there’s more than one vaccine? What if we have very limited safety data since we’ll only have tested it on one-ten-thousandth of the people who will ultimately need it? What if the immunity it confers is short-lived? Then what do we do?” he said. On top of the complicated logistics of producing and distributing a vaccine, he emphasized, there are also the dicey questions of who should be first in line and how to coax hesitant populations to participate.

Campaign advisers aren’t necessarily opposed to the Trump administration’s plan to give the Defense Department an unprecedented role in distributing a vaccine, as long as public health officials are in charge of key decisions and remain the nonpartisan face of the effort.

And Murthy said the troubled rollout of the H1N1 vaccine in 2009, when the administration initially came up short on the number of doses available, taught Biden many lessons — including how to partner with state and local leaders, how to avoid overpromising, and how to discover problems before it’s too late.

“We need strong data systems,” he said. “What we don’t want to do is a vaccine delivery effort and then realize three months in that there are huge holes and that certain populations are not getting the vaccines they need.”

But even in the best-case scenario, with an effective vaccine and enough of the population willing to take it, the virus is still likely to dominate at least the early stages of a Biden presidency.

“We could have been like New Zealand, with a very low rate of background transmission that we would need to suppress,” Emanuel said. “Instead, we have way too many cases, so we’ll have to go back to the basics. It makes it harder for everyone, because so little of the groundwork has been laid to get it done.”

Back pain: The best treatment for shooting pain down your lower back to your leg

People who frequently suffer from a bloated stomach may want to look at their diet. Two food types prone to giving you gas are...
Read more