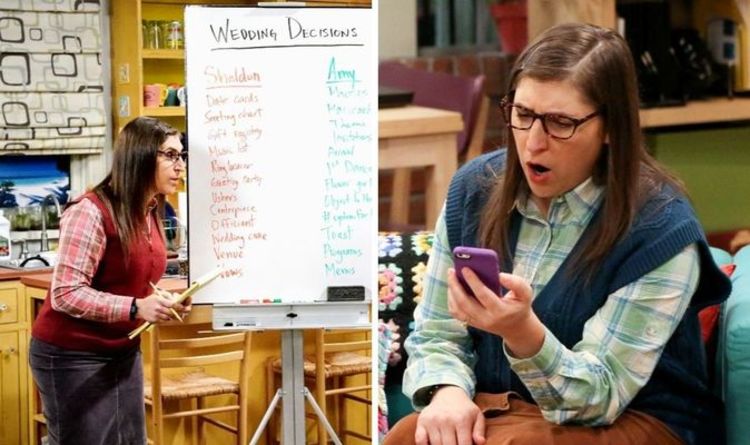 Sheldon Cooper has ruffled his friends’ feathers many times over the years, but a classic episode of The Big Bang Theory confirmed things wouldn’t be the same without him. Unfortunately, fans returned to the series on CBS All Access and Netflix and discovered a bizarre mistake in Amy’s hypothesis.

No sitcom is complete without a Christmas parody of It’s A Wonderful Life, and The Big Bang Theory was no different.

Back in its seventh season, the gang pondered where their lives would be if they had never met the irritable genius, Sheldon Cooper (played by Jim Parsons).

Despite plaguing his roommate Leonard Hofstadter (Johnny Galecki) with his obsessive and immature behaviour, everyone agreed they were all better off having met Sheldon.

Their theory was put to the test by Sheldon’s girlfriend and later wife Amy Farrah Fowler (Mayim Bialik).

The ever enthusiastic Amy quickly went to work on a detailed diagram in order to assess the groups potential lives in Sheldon’s absence.

As Sheldon first introduced Amy to the gang after meeting on a dating app, Howard Wolowitz (Simon Helberg) would have also missed out on dating Bernadette Rostenkowski (Melissa Rauch).

While everyone agreed Howard and Raj Koothrapali would have still been good friends, Howard conceded he would probably still be living with his mother were it not for Sheldon.

They said: “When Amy says that Penny never would have met Stan Lee, she draws a thick black line between ‘Penny’ and ‘Stan Lee’ on the board.

“The camera goes to Penny, and when it comes back to Amy, the line is blue and faint.”

Big Bang star Mayim Bialik made the unfortunate mistake of choosing a bold, black marker to draw the line on the whiteboard.

As the rest of the board remains unchanged, it can be assumed the diagram was set up and ready for Amy to draw the line, then erased if the scene needed additional takes.