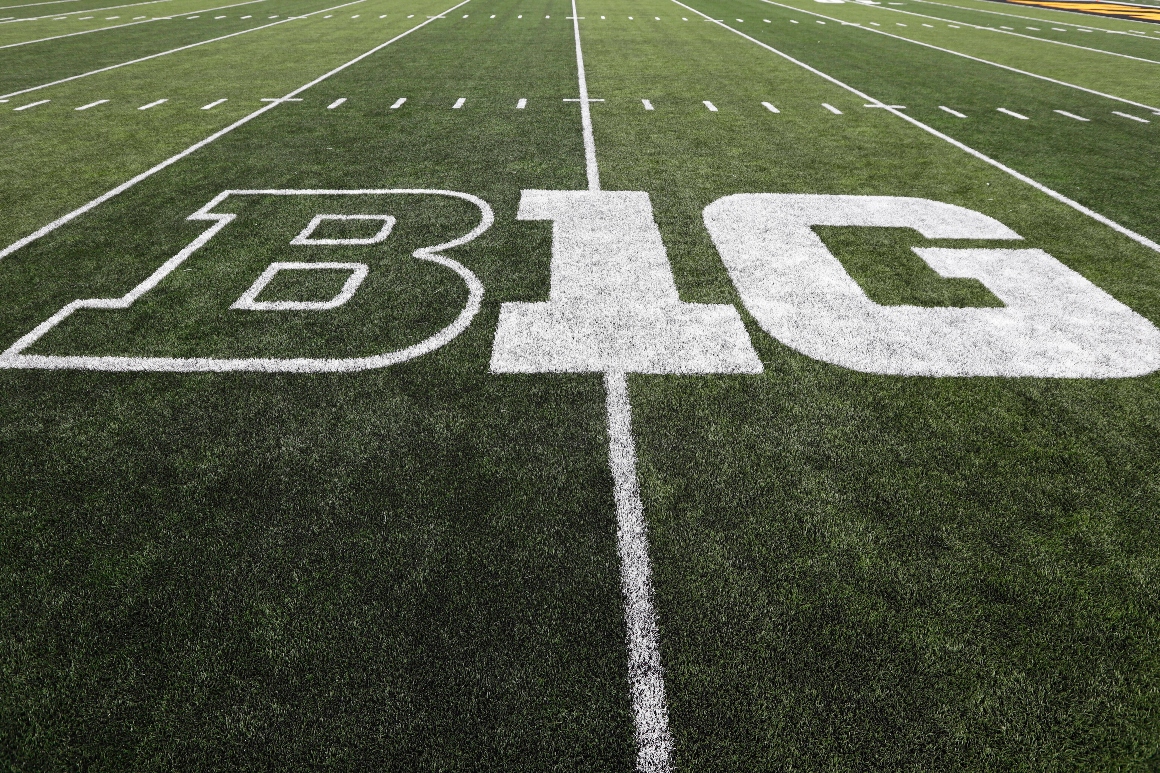 The conference said it will use a new daily virus-testing plan for players, coaches and staff that’s set to begin by Sept. 30. Athletes who contract the virus will also undergo additional screening for cardiac conditions and will be kept out of competitions for at least three weeks following a confirmed diagnosis for the illness.

Teams also must stop practices and games for at least a week if they log test positivity rates greater than 5 percent.

The Big Ten’s move is a “huge win, not just for college football fans, but for all Americans looking for key indicators that we can reopen our society and our economy, and do so safely,” Trump campaign manager Bill Stepien said, noting the president’s direct conversation with Warren. The campaign cited the same-day testing and improvements in general public health as evidence Trump’s response to the pandemic has been a success.

He used the moment to attack Democratic rival Joe Biden.

“We know that Joe Biden would not have pushed for this, since he has looked for every reason to keep our country closed for as long as possible, because he believes it would help him politically,” Stepien said.

One recent online series of ads targeting sports fans blamed Trump’s handling of the pandemic for the absence of Big 10 football. The ads show aerial footage of empty football stadiums.

Morton Schapiro, president of Northwestern University and a Big Ten official, said the conference’s medical protocols and standards spurred his personal reversal on the season’s fate.

The conference also said announcements about other fall and winter sports are imminent.

The Pac-12 Conference, a collection of schools in the western United States, is now the only major college sports conference to hold back on fall athletics, while devastating wildfires have damaged the region’s air quality. Public health officials in California and Oregon have not approved a return to practices with physical contact, Pac-12 Commissioner Larry Scott said.

“We are eager for our student-athletes to have the opportunity to play this season, as soon as it can be done safely and in accordance with public health authority approvals,” Scott said in a statement.

In the Atlantic Coast Conference, coronavirus infections prompted Virginia Tech to postpone the first two games of its season, including this weekend’s scheduled matchup against the University of Virginia. That conference has pressed ahead with fall football alongside the Southeastern Conference, Big 12 and smaller-college conferences.

During a hearing Tuesday on Capitol Hill, lawmakers raised concerns about athletes returning to the field amid warnings from public health experts about the potential for new virus outbreaks as schools host games with thousands of fans in attendance.

“If we’ve had to scrap the first two (Virginia Tech) games … why are we working so hard to continue fall football if the results, at least in the ACC, are such that grave questions about the ability to do it safely are so obvious?” asked Sen. Tim Kaine (D-Va.).

Rebecca Blank, chancellor of the University of Wisconsin-Madison and a witness at Tuesday’s hearing, said several problems prompted the Big Ten’s original cancellation, including uncertainty about being able to do “the level of testing and contact tracing that we needed to keep athletes safe,” plus “growing evidence” and questions about a heart condition related to Covid-19.

“The Big Ten’s presidents, chancellors, and the ‘return to competition task force’ deserve credit for reevaluating and concluding that we can responsibly bring back football,” Nebraska Republican Sen. Ben Sasse said. “We need to keep working to beat this nasty virus, but today’s decision is a good signpost that, with prudent practices and rigorous testing regimes, we can keep moving back toward normal.”

Further south, Arkansas State University said it could not safely play a scheduled Saturday game against Central Arkansas because its team could not assemble enough players to adequately fill its roster. Ed Orgeron, head coach of Louisiana State University’s powerhouse football team, said his squad has sustained infections as well.

“There is no telling what’s going to happen with the Covid,” Orgeron told reporters on Tuesday.

“Two weeks ago, we had everybody on our offensive line, except two or three guys, were out,” he said. “But I think most of — not all of our players — but most of our players have caught it. So I think that hopefully they don’t catch it again and hopefully they’re not out for games.”

It’s not just Southern schools that are struggling to quell the spread of the virus.

Infections in Michigan State University’s home of East Lansing prompted the county health department to order residents of 30 large houses into an immediate two-week quarantine this week. Many of the affected are university fraternity and sorority students.

“I do not take this lightly, but there is an outbreak centered on Michigan State University, and it is quickly becoming a crisis,” county health officer Linda Vail said Monday. “The surge in cases we have seen over the past few weeks is alarming.”

Hilary Duff on her 'Lizzie McGuire' years: 'It's not like I didn't sneak off and party sometimes and get drunk'

While most people that came of age watching Disney’s Lizzie McGuire have fond memories of it, star Hilary Duff was not one of them...
Read more

Justin Bieber and Hailey Baldwin: A Timeline of Their Relationship

Jessica Vacco-Bolanos Sorry, Beliebers — there’s only one girl Justin Bieber has eyes for! After facing plenty of ups and downs in their relationship, the...
Read more