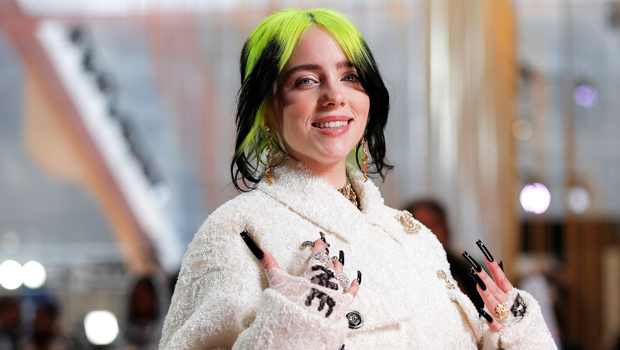 Billie Eilish has moves! She showed off how she can twerk just as fiercely as Cardi B while getting goofy behind the scenes of her ‘Therefore I Am’ music video.

When it comes to famous singers who have mad twerking skills, Billie Eilish just rocketed onto the list. She busted out the talent that many fans were unaware she had while in her down time from filming her “Therefore I Am” music video.  It was four o’clock in the morning as she and her team were taping inside the empty Glendale Galleria mall, when she and a pal decided to play the “Try Not To Dance” TikTok challenge with all booty shaking hip hop tunes. While they failed miserably, Billie proved to be a twerk-master.

Billie shared the series of behind the scenes photos and videos to her Instagram page on Nov. 15. In the TikTok challenge she could be seen in the same colorful cardigan and baggy shorts that she wears in the TIA music video. She and a masked up friend stand perfectly still inside a store next to two clothes-free mannequins. Migos‘ “Hannah Montana” twerk mix comes on and already the 18-year-old can’t stand still, as she begins moving her knees to the rhythm.

Billie the manages to succeed in the game by not dancing for a few more song snippets, but by the time Blac Youngsta‘s “Booty” comes on, Billie is in full twerk mode. She seems to be having a total blast, and is actually really good at the hip and tush shaking moves. She’s all-in by the time G-Eazy’s “No Limit” comes on, featuring Cardi B‘s bars drop in the song.

Fans completely lost it over Billie’s previously secret twerking talent. User @wishyouwerebil wrote, “YOU DID NOT JUST TWERK IM SCREAMING,” while billieburrito wrote, “BILLIE TWERKING- I NEVER KNEW HOW MUCH I NEEDED THIS,” and yes the fans did write in all caps. Follower @breeilish exclaimed, “BILLIE TWERKING I REPEAT BILLIE TWERKING” while @melovemealot asked, “Why u so goooood at twerkin?”

While the twerking video is what got the attention of fans, other elements to the post showed what it was like behind the scenes on Billie’s shoot. She shared a photo with the grey pit bull that she began fostering during quarantine — but fell in love with so much she ended up adopting it. One video showed her being driven around the mall in a golf cart, while another showed her being filmed shooting the video as the cameraman used an iphone to capture the action. But it was Billie’s twerking skills that helped the post cross over the 10 million likes mark in under 24 hours.