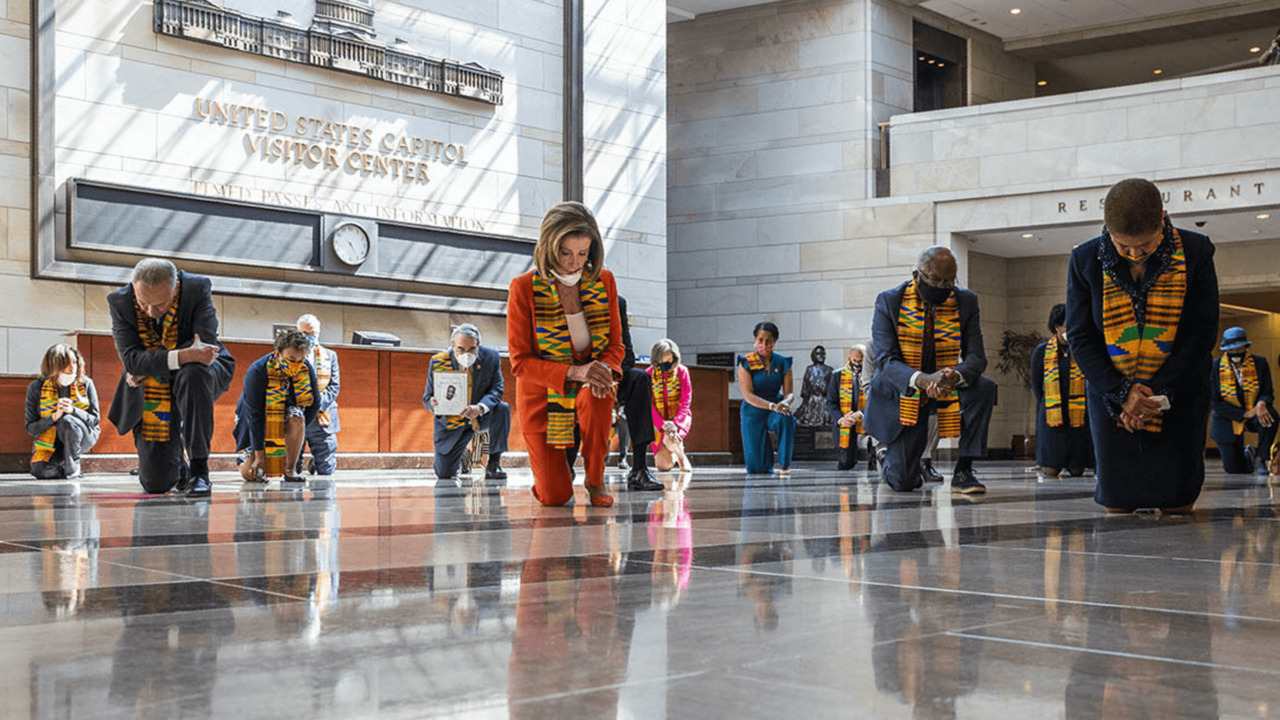 House Majority Leader Steny Hoyer (D-Md.) said he plans to call the House back as soon as the bill is ready for a vote, likely before the end of June. But, Hoyer added, he’s not as confident the Senate will pass the legislation given how the chamber has struggled in recent days to pass a bipartisan bill making lynching a federal crime.

Before introducing the police reform bill, Bass, Hoyer, Speaker Nancy Pelosi, Senate Minority Leader Chuck Schumer, Sens. Cory Booker (D-N.J.) and Kamala Harris (D-Calif.) and other top Democrats gathered in the Capitol in silence for 8 minutes and 46 seconds, the amount of time an officer knelt of Floyd’s neck. The Democrats, all clad in kente stoles, knelt together on the floor to honor Floyd and other black Americans killed by police.

Thousands of mourners are expected to pay their respects to Floyd in a public memorial in his hometown of Houston on Monday before he is buried Tuesday. Floyd’s brother, Philonese Floyd, is scheduled to testify during the House Judiciary Committee’s hearing on police brutality on Wednesday.

A wave of protests swept the nation in the days after a video surfaced showing a white Minneapolis police officer, Derek Chauvin, pinning Floyd to the ground with his knee on Floyd’s neck for 8 minutes and 46 seconds. Floyd lost consciousness and was later pronounced dead. Chauvin, who has been charged with second-degree murder, third-degree murder and manslaughter, will make his first court appearance Monday. Three other officers are also facing charges connected to Floyd’s killing.

Those protests, which continued throughout the weekend, have largely been peaceful after early, and sometimes violent, clashes with police across in New York, Los Angeles and Washington, D.C., among other cities.

While the legislation proposes a sweeping overhaul of current laws — including moving to ban chokeholds and making it easier to sue police officers who unjustly injure or kill citizens — it doesn’t answer liberals’ most aggressive demand to “defund the police.” Police departments are largely funded at the state and local level, although there is significant federal aid.

Democrats want to lower the federal threshold for when police officers can be charged with using excessive force and limit “qualified immunity” which currently shields officers from lawsuits over their misconduct, according to a draft outline obtained by POLITICO.

Democrats are also seeking to create a “National Police Misconduct Registry,” end racial profiling, bar the use of “no-knock” arrest warrants in drug cases, develop a national standard on using force, and limit the transfer of military equipment to police departments, among other initiatives.

The legislation would also make lynching a federal crime. A proposal to do that was held up in the Senate last week by Sen. Rand Paul (R-Ky.), who wants to narrow the definition of lynching.

But it’s unclear if the Democratic police reform bill, which powerful police unions will surely oppose, will receive bipartisan support — a necessary component in the GOP-controlled Senate. And many Republicans have already started to draw their political battle lines — trying to cast themselves as fighting off “radical” Democrats who only want to defund police departments.

In a sign of how contentious the fight over the legislation could be, House Minority Leader Kevin McCarthy (R-Calif.) spent Monday morning retweeting President Donald Trump’s calls for “law and order” and tweeting his own message of backing the police.

“Democrats want to defund you, but Republicans will never turn our backs on you,” McCarthy tweeted.

“I think for us, especially when it comes to this legislation, we feel that it is transformative, that it will transform the relationships our communities have with the police,” Bass said. “And I think for the ‘law and order’ message the president is spewing out of there, there’s nothing new about that message and I do not believe it will be successful.”

House Democrats plan to mark up the bill in the Judiciary Committee in two weeks, and put it on the floor for final passage by the end of June. Schumer has called on Majority Leader Mitch McConnell (R-Ky.) to bring the legislation before the Senate by July 4.

“In the Senate, Democrats are going to fight like hell to make this a reality,” Schumer said Monday. “Leader McConnell, let’s have the debate. Not just on TV and Twitter but on the floor of the United States Senate. A divided nation cannot wait for healing, for solutions.