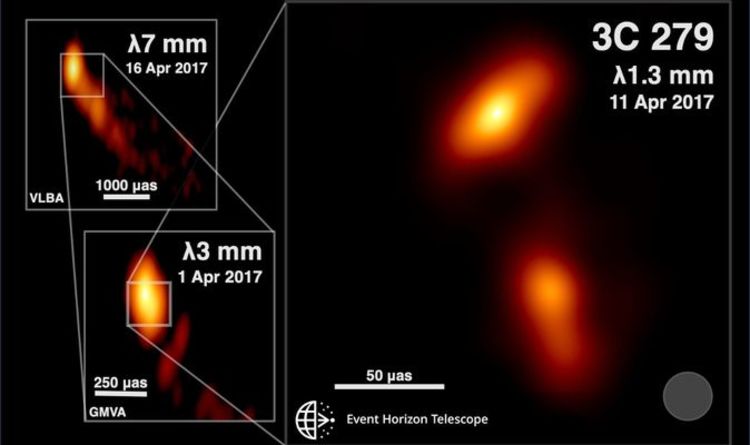 A video from the Event Horizon Telescope (EHT) has revealed a distant black hole spewing particles into the Universe. The supermassive black hole is located a staggering five billion light-years from Earth and sits at the heart of a quasar.

A quasar is the bright heart of a galaxy where a black hole and its accretion disk – the gas and dust surrounding the black hole – produce a vast amount of energy.

The friction generated by these accretion disks as they are pushed and shoved by the extreme gravitational force is so large that it can produce a tremendous amount of energy.

Some of the materials get sucked into the black hole, while others are ejected out into space.

Due to the sheer energy, these materials are blasted out into the universe at 99.5 percent the speed of light – which is 299,792,458 metres per second.

A study from the EHT – which is an international collaboration of astronomers – which produced a series of images of the quasar known as 3C 279 has helped to create a video of the black hole’s powerful activities.

To capture the images, the researchers used a technique called very long baseline interferometry (VLBI), which synchronises and links radio dishes around the world.

By combining the dishes, astronomers are essentially able to create a virtual “Earth-sized” telescope.

According to the EHT: “The EHT is able to resolve objects as small as 20 micro-arcseconds on the sky – the equivalent of someone on Earth identifying an orange on the Moon.”

Jae-Young Kim, researcher at MPIfR and lead author of the paper, is enthusiastic and at the same time puzzled: “We knew that every time you open a new window to the Universe you can find something new.

“Here, where we expected to find the region where the jet forms by going to the sharpest image possible, we find a kind of perpendicular structure.

“This is like finding a very different shape by opening the smallest Matryoshka doll.”

Avery Broderick, an astrophysicist working at the Perimeter Institute, explained: “For 3C 279, the combination of the transformative resolution of the EHT and new computational tools for interpreting its data have proved revelatory.

ByThe Sun is constantly releasing huge explosions of plasma into deep space. In this instance, the particles released on the solar flare were pointed...
Read more