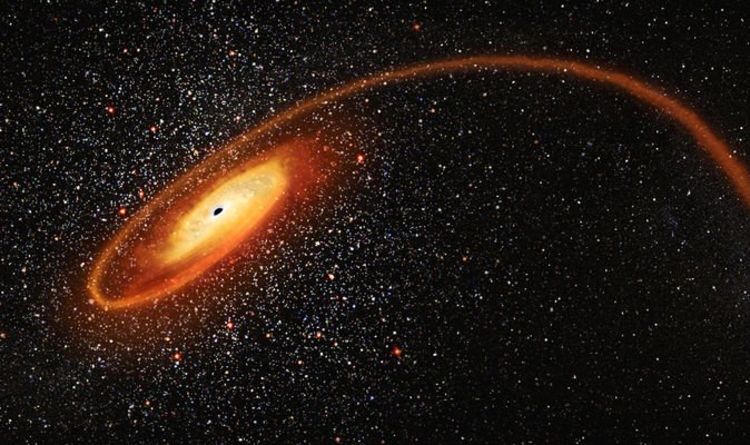 Some astronomers go even further and suggest they even offer a backdoor into another Universe.

Although Professor Albert Einstein’s Theory of General Relativity agrees with the existence of wormholes, their existence remains highly controversial.

Wormholes, if they really do exist, closely resemble black holes.

The primary difference is no object can theoretically return after crossing a black hole’s event horizon.

In contrast, any body entering a wormhole could theoretically escape.

On the supposition wormholes do exist, a groundbreaking study looked into new ways one might distinguish one from the other.

The researchers focused on the largest black holes, boasting masses billions of times more than our Sun, as they sit at the centre of most galaxies.

Anything or anyone entering a wormhole could theoretically exit somewhere else.

As a result, this could mean matter entering one endcould encounter matter heading in the other direction.

This would likely be hurtling along at extraordinary speeds due to the wormholes’ powerful gravitational fields.

The study saw astronomers modelling such a cosmic meeting in the wormhole’s “throat”.

And they now suspect the consequence would be spheres of plasma spewing out both ends of the wormhole at speeds approaching the speed of light.

Dr Mikhail Piotrovich, study lead author and Central Astronomical Observatory astrophysicist, said in a statement: “What surprises me most of all is that no one has proposed this idea before, because it is rather simple.”

The study then compared these wormhole outbursts with those from a supermassive black hole called an active galactic nucleus (AGN).

These can blast out more radiation than our entire galaxy does as they greedily eat matter around them.

AGNs are usually surrounded by rings of plasma known as accretion disks and can fire powerful jets of radiation from their poles.

At these temperatures, the plasma would produce gamma rays with energies of 68 million electron-volts.

However, Dr Piotrovich said: ”Accretion disks of AGNs don’t emit gamma radiation, because their temperature is too low for that.

The researchers concluded, this could mean an apparent AGN could really be a wormhole.

ByEverything you need to know about the Moon: The Moon is the Earth's only natural satellite, although tiny space rocks dubbed minimoons can get caught...
Read more