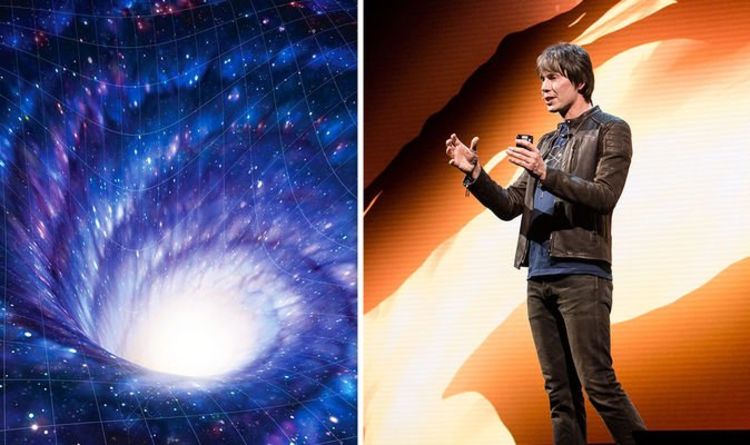 Black holes are regions of spacetime that form when massive stars collapse at the end of their life cycles and can continue to grow by absorbing stars and merging with other black holes. This interaction allows scientists to identify their presence, as electromagnetic radiation is given off as visible light across space. In this way, astronomers have identified numerous stellar black hole candidates in binary systems, and established that the radio source known as Sagittarius A*, at the core of the Milky Way galaxy, contains a supermassive black hole of about 4.3 million solar masses.

In January this year, Professor Brian Cox appeared on the Joe Rogan Experience, where the host quizzed him on the black hole at the centre of the galaxy.

Professor Cox said: “These little ones are still a few times the mass of the Sun, they come from collapsed stars at the end of their life.

“They run out of their fuel and they start to collapse as gravity squashes them, if they are sufficiently massive, then there is nothing that can stop them.

“They collapse, as far as we know, to an infinitely dense point, we don’t know what happens right in the middle.

“They collapse to such an extent that there is a region around it where light can’t escape and that is what is known as the black hole.

“They are still stars, but there is a region that if you fall in, called the event horizon, you go to the centre.”

The 51-year-old made a chilling admission though, warning that you never want to get anywhere near this phenomenon.

He added: “The time and space sort of flips, in the same way that we are going into the future now, if you fall in past the event horizon, you are going  to the middle, the singularity is what it is called.

“Every line of your future points to the centre of the black hole, there is no escape, the ultimate prison.

“You’re going to get squashed to an infinitely dense point.

“The Sun is a small star really, and when it collapses [in the future], there’s a sort of pressure which is caused by the fact that electrons don’t like each other, so it’s called the Pauli exclusion principle.

“Essentially what happens is that as they get squashed closer and closer together, they move faster and faster, to get out of each other’s way, that makes a force which holds them up.

“That creates what is called a white dwarf star, so you can have a blob of matter about the size of the Earth and the mass of the Sun.”

Professor Cox then explained the lifecycle of a black hole.

He said: “There’s another version, which is called a neutron star, which is the same thing, but for neutrons as they move faster and faster.