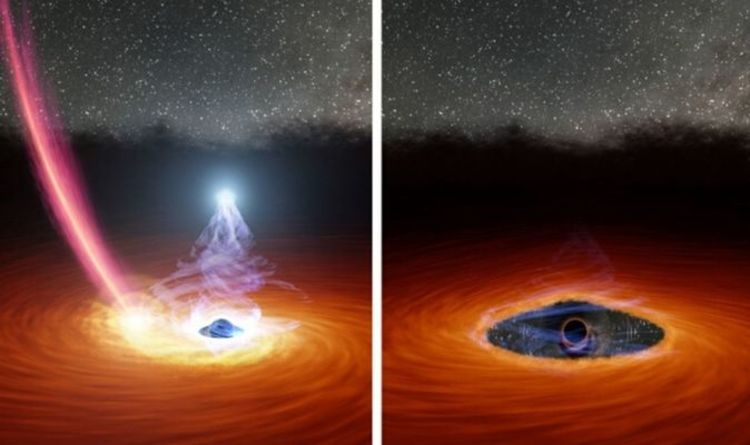 Black holes continue to remain one of the most baffling entities in the Universe, and no matter how much progress astronomers make, there still seems to be something else to discover. Now, experts have discovered a black hole which exploded in light over a relatively small period, leaving scientists with “mind boggling” headaches.

A new study from the Massachusetts Institute of Technology (MIT) observed a black hole’s corona – the ring of super-bright energy which encircles a black hole – disappear before rapidly bursting back into light with extreme luminosity.

MIT physicist Erin Kara said: “We expect that luminosity changes this big should vary on timescales of many thousands to millions of years.

“But in this object, we saw it change by 10,000 over a year, and it even changed by a factor of 100 in eight hours, which is just totally unheard of and really mind-boggling.”

While what happened to the black hole’s corona is still largely a matter of guesswork, the scientists behind the study published in The Astrophysical Journal Letters, believe a runaway star may have been caught up in the ring of light, causing everything to essentially jam up.

A statement from MIT said: “Like a pebble tossed into a gearbox, the star may have ricocheted through the black hole’s disk of swirling material, causing everything in the vicinity, including the corona’s high-energy particles, to suddenly plummet into the black hole.”

Following the disappearing act, researchers said the corona would have been able to build up again, with the intense friction in the swirling gas once again able to produce the bright lights.

Ms Kara said: “This seems to be the first time we’ve ever seen a corona first of all disappear, but then also rebuild itself, and we’re watching this in real-time.