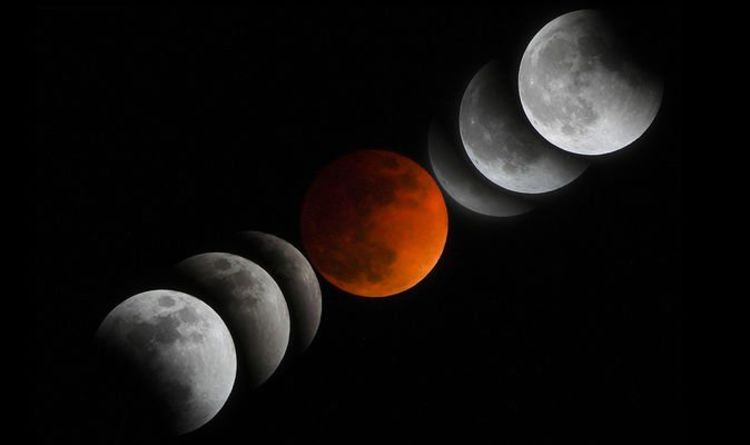 What is the cause of a Blood Moon eclipse?

Although the term Blood Moon is not scientific, it is associated with an atmospheric effect that occurs during a total lunar eclipse.

During a total eclipse of the Moon, the lunar orb completely enters the planet’s umbra – the direct shadow cast by the Sun’s light.

Sunlight scattered around the edges of the planet’s dusty atmosphere is filtered, leaving reddish wavelengths of light to reach the Moon.

The effect, known as Rayleigh scattering, is similarly responsible for the colour of sunsets and sunrises.

READ MORE: Jupiter’s moon Europa could sustain life in ocean, according to NASA

According to the US space agency NASA, if you were to see Earth from the surface of the Moon during a Blood Moon eclipse, the planet would be bathed in a red halo.

NASA said: “The air molecules from Earth’s atmosphere scatter out most of the blue light.

“The remaining light reflects onto the Moon’s surface with a red glow, making the Moon appear red in the night sky.

“The name ‘Blood Moon’ is also sometimes used for a Moon that appears reddish because of dust, smoke or haze in the sky.

“And it can be one of the Full Moons of autumn when the leaves are turning red.”

But the eclipse will also be penumbral, meaning the Moon will pass through the weaker of Earth’s two shadows.

The Sun’s light casts two shadows behind Earth: the umbra and the penumbra.

The umbra is the direct and darkest shadow that narrows down as it extends into space.

The penumbra is much weaker and more diffuse, extending out into space on either side of the umbra.

Unfortunately, penumbral eclipses can be hard to spot if you do not what to look out for.

As a result, next month’s lunar eclipse will not be a Blood Moon.

You will have to wait for almost a year before the next total eclipse.

The next five Blood Moon eclipses fall on:

Peter Dockrill As the world struggles with the ongoing crisis of the coronavirus pandemic, scientists warn that the infection may pose yet another serious threat...
Read more
Science